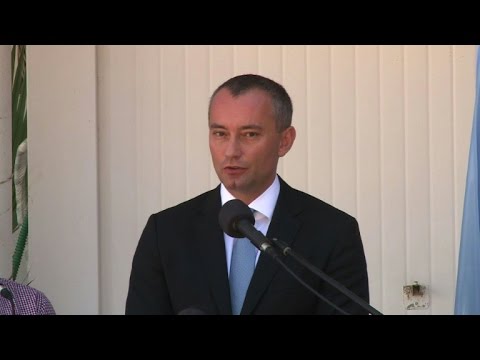 Thousands of demonstrators came out in Jordan on Friday to protest what appears to be a new Israeli assertion of authority over Muslim sacred space in Jerusalem, which includes the third holiest place in the world for Muslims, the al-Aqsa mosque complex. King Abdullah II of Jordan, who is formally responsible for the Muslim shrines, has formally protested to Israel over the Israeli troops taking over al-Aqsa. The protesters included both members of the Jordanian Muslim Brotherhood and Jordanians loyal to the king; Israel’s actions have put the monarchy in a bad light, since Amman has a peace treaty with Israel. Throughout the West Bank, tensions ran high at Friday prayers, as Israeli forces prevented Palestinians from entering the old city and forbade men over 40 years of age to pray at al-Aqsa mosque, which is described in the Arab press as virtually an Israeli military garrison.

There has been an increase in Jewish visitors to what they call the temple mount during the High Holy Days (Tuesday was Rosh ha-Shanah, the New Year), since it was the site of a long-since destroyed Jewish temple in late antiquity. Muslim volunteers, “Murabitun,” to safeguard the Muslim sacred space have been expelled by Israeli forces. The al-Aqsa complex is government by international agreements, the “Status Quo,” which Israeli authorities deny having altered.

As part of this assertiveness and to prevent effective Palestinian protests against the apparent encroachments, Prime Minister Binyamin Netanyahu has announced that he wants to authorize Israeli forces to use live fire against Palestinian rock-throwing demonstrators. (Most such rock throwers are children and teenagers). He and his cabinet also want to give rock throwers long prison sentences and to demolish their family homes.

Using live fire against unarmed protesters throwing stones is a violation of the principle of proportionality in international law, to say the least. It is also a violation of the 4th Geneva Convention on the treatment of occupied populations by the occupying authorities (Israel has militarily occupied the West Bank and East Jerusalem since 1967 and illegally annexed portions of the West Bank to the Israeli district of Jerusalem).

Since the first Palestinian uprising or Intifada of the late 1980s, rock-throwing has been a common form of protest in the Palestinian West Bank against steady Israeli theft of their land and resources. It has been above all a favored form of protest for children and teenagers, with mothers often carrying out the task of breaking larger stones into smaller ones for throwing. Israeli forces and Israeli squatters have killed nearly 2,000 Palestinian children since the year 2000, and that number will skyrocket under Netanyahu’s new procedures.

In Egypt, the Muslim Brotherhood has also been protesting Israeli troops at al-Aqsa with demonstrations in at least Cairo and Alexandria, after a period in which it was quiescent after the overthrow of its president, Mohammed Morsi. The United Nations Security Council and French President Francois Hollande have expressed fears that Israeli aggressiveness at al-Aqsa will further destabilize the Middle East.

AFP: “Envoy: UN ‘concerned about the provocations’ in Jerusalem”