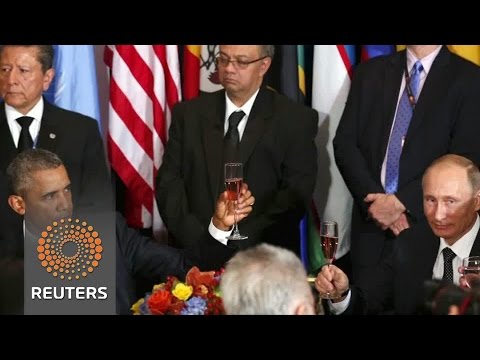 President Obama seemed awfully defensive in his speech at the United Nations on Monday. The reason is not far to seek. Russia’s Vladimir Putin has surprised Washington by volunteering to get militarily involved in Syria and by arguing that only by enlisting the Baath regime of Bashar al-Assad can Daesh (ISIS, ISIL) be defeated.

Obama is defensive because a) his own plans for confronting Daesh have largely failed, and b) because Putin’s plans for doing so are concrete and involve trying to prop up dictator Bashar al-Assad.

Putin is arguing for a unified push against Daesh by a wide range of countries, and for allying in this effort with the government of Syrian president Bashar al-Assad. He says only such a unified response has a hope of prevailing. He points to Libya as an example of the chaos that occurs in the wake of Washington’s insistence on going around overthrowing governments.

So ironically the Russian Federation and its ex-Communist president is taking a conservative position here, of trying to prop up the status quo, which the US views itself as a radical democratizer a ala Thomas Paine.

Obama, I think, tried to get the Libya comparison out of the way by apologizing for the way NATO abandoned that country after the successful intervention of 2011. He said,

In such efforts the United States will always do our part. We will do so, mindful of the lessons of the past. Not just the lessons of Iraq but also the example of Libya, where he joined an international coalition under a U.N. mandate to prevent a slaughter. Even as we helped the Libyan people bring an end to the reign of a tyrant, our coalition could have and should have done more to fill a vacuum left behind. We are grateful to the United Nations for its efforts to forge a unity government. We will help any legitimate Libyan government as it works to bring the country together. But we also have to recognize that we must work more effectively in the future as an international community to build capacity for states that are in distress before they collapse.

Obama is trying to say that the original sin was not intervention or the overthrow of a dictator but the absolute neglect of Libya in the aftermath.

By analogy, he is saying that a joint effort to remove Bashar al-Assad could work out fine if all the participating countries join together in rebuilding the Syrian army and state in the aftermath.

Obama is a smart man but this plan is completely unworkable. Daesh in Syria would likely take advantage of the fall of the Baath to Western forces, who, staying in the skies above Syria, could no more take them on efficiently then than they can do now.

Obama offered to work with Russia against Daesh, which has allied with the Baath regime of Al-Assad, but said, that “there cannot be, after so much bloodshed, so much carnage, a return to the prewar status quo.” This statement is true in both international law and in everyday practice. Al-Assad is too tainted by mass murder to continue as president. And, the third or so of his population who have seceded from his rule are heavily armed and don’t want him coming back.

Let’s remember how this started. Assad reacted to peaceful protests by escalating repression and killing that in turn created the environment for the current strife. And so Assad and his allies can’t simply pacify the broad majority of a population who have been brutalized by chemical weapons and indiscriminate bombing.

Confirming what many of us have long suspected, that Obama is a fan of the Realists in political Science, he added, “Yes, realism dictates that compromise will be required to end the fighting and stomp out ISIL. But realism also requires a managed transition away from Assad into a new leader and an inclusive government that recognizes there must be an end to the chaos so that the Syrian people can begin to rebuild.”

Obama blamed al-Assad for the rise of Daesh, omitting mention of American responsibility via the destruction of Iraq.

Putin complained that the problems in Syria come from US and its allies back so-called moderate rebels, who the moment they can run off to join Daesh: “And now, the ranks of radicals are being joined by the members of the so-called moderate Syrian opposition supported by the Western countries. First, they are armed and trained and then they defect to the so-called Islamic State.”

Putin then went in for some conspiracy thinking, blaming the US and the West for creating Daesh (they did not) to overthrow secular regimes (which they don’t want to do). “Besides, the Islamic State itself did not just come from nowhere. It was also initially forged as a tool against undesirable secular regimes.”

Putin’s own fears about the possible spread of Daesh to Russian provinces such as Chechniya is palpable: “Having established a foothold in Iraq and Syria, the Islamic State has begun actively expanding to other regions. It is seeking dominance in the Islamic world. And not only there, and its plans go further than that. The situation is more than dangerous.”

Putin is alarmed in a way that Obama really never has been by Daesh. For the US security establishment, Daesh is bad but not near or all that big or all that urgent. The US approach to Daesh has seldom gone beyond aerial containment. Putin begs to differ.

Putin then got to his point:

“We think it is an enormous mistake to refuse to cooperate with the Syrian government and its armed forces, who are valiantly fighting terrorism face to face. We should finally acknowledge that no one but President Assad’s armed forces and Kurds (ph) militias are truly fighting the Islamic State and other terrorist organizations in Syria.”

But actually during the past two years long periods of time have passed in which the al-Assad regime seldom militarily engaged Daesh, leaving it to prey opportunistically on the other rebel groups. You couldn’t call that valiant.

So Obama wants al-Assad to stand down as a prerequisite for effective US action against Daesh in Syria (a few air sorties and even fewer air strikes are ineffectual). Putin thinks al-Assad is key to defeating Daesh and that everyone should ally with Damascus.

Putin is blind to the ways that al-Assad and his military brutality is prolonging the civil war. Backing his genocidal policies will just perpetuate that war. The Guardian says he showed more flexibility after his speech: “However, Putin showed more flexibility than he had in his general assembly speech, acknowledging that political reform in Damascus could be part of a solution, but indicated that Assad would be a willing participant in that change.”

Some sort of synthesis of the Putin and Obama plans is likely to emerge. Obama’s romance with drones and aerial bombardment blinds him to the poor progress the US has made against Daesh using those tools. His search for “moderate” forces to back seems also in Syria to be a pipe dream. If Putin ties himself too closely to the sinking ship of Bashar, he will go down with it.

As Obama said, though, Syria policy-making is the most complex problem the US has faced in over a decade.

Reuters: “Obama and Putin share a toast at the UN.”