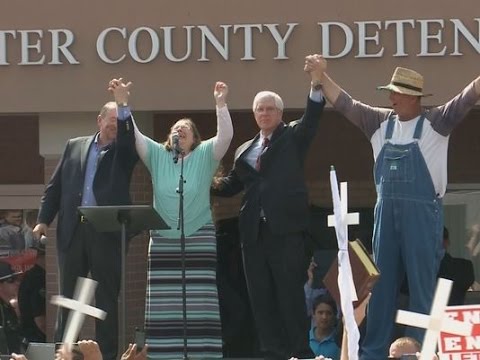 Kentucky court clerk Kim Davis was released from prison on Tuesday after having been jailed for 5 days for contempt of court because she will not issue marriage licenses to her gay constituents. Her release was turned into a circus by Mike Huckabee, seeking a way to kickstart his failed presidential bid.

“Harville said his daughter Stella Harville, who is pursuing a master’s degree in optical engineering at a school in Indiana, brought her fiancé, Ticha Chikuni, to church in June and played the piano as he sang.

The couple performed I Surrender All, said Stella Harville, who is 24.

Chikuni, 29, who works at Georgetown College, is black. He is a native of Zimbabwe.

The pastor forbade them to sing again and then staged a vote against their joining the church, which he won. What if Kim Davis belonged to that church and refused to issue a license to that couple? Would she be a hero?

In fact, Southern lawmakers tried to insert a religious exception into the 1964 Civil Rights Law, which would have gutted it by allowing discrimination by religious bigots. In the case that provoked Loving vs Virginia, (1967) a grand jury indicted a mixed-race couple in that state and a lower court judge actually wrote:

“Almighty God created the races white, black, yellow, malay and red, and he placed them on separate continents. And, but for the interference with his arrangement, there would be no cause for such marriage. The fact that he separated the races shows that he did not intend for the races to mix.”

Malay? That was a race you couldn’t marry into? Who knew?

That man held his religious beliefs as sincerely as Kim Davis. What if his counterpart of today was in Davis’s position and refused to issue licenses on grounds of what was then called the crime of miscegenation? Would Huckabee crow about it? Would Cruz?

Huckabee said making Davis issue the licenses to gay couples against her Christian conscience violates American democracy. But the US is a republic with a rule of law, not a demagogic ‘democracy’ of fundamentalist mob rule. The Founding Fathers were afraid of rabble-rousers like Huckabee and Ted Cruz, which is why we have a senate and an electoral college. They were also afraid of Christians imposing their will on deists and non-conformists (like Quakers), which is why they put the Establishment Clause in the First Amendment. That clause has now been adopted by all the state constitutions, too.

Davis is an elected state official. She is trying to use her government position to impose her religious views on gay citizens of her district. To paint her as standing up to the government is weird. She is violating the prohibition on state officials establishing an official church. And she is discriminating against her own constituents, as surely as if she were refusing to licence inter-racial marriages — which were illegal in some states until the SCOTUS Loving ruling.