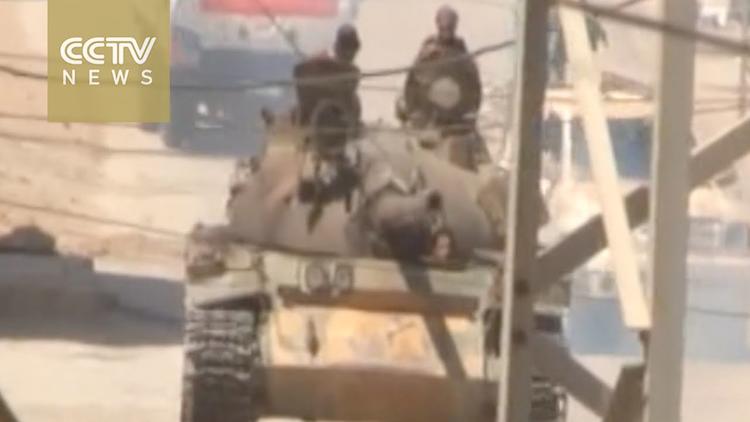 UNITED NATIONS (IPS) – The United States and Russia are escalating arms sales to two of their major allies in the Middle East – Iraq and Syria – despite fears that some of these weapons may ultimately wind up, ironically, in the hands of armed rebel groups battling government forces.

The proposed U.S. sales to Iraq include 175 additional Abrams battle tanks and about 1,000 Humvee armoured vehicles, along with fighter jets, attack helicopters and laser-guided missiles – all worth over 15 billion dollars.

But the ultimate beneficiaries may be rebel groups, including the Islamic State (IS), Al-Qaeda and the Nusra Front, who may inherit these weapons – either capturing them in battle or confiscating them from regular armed forces, who are known to abandon weapons and flee the battle field, as in several previous occasions.

The Wall Street Journal says some U.S. lawmakers, conscious of the risks, are conditioning any approval of arms sales to Iraq on “assurances the weapons won’t fall into enemy hands.”

Since both U.S. President Barack Obama and Russian President Vladimir Putin will be at the United Nations to address the high level annual debate, the two leaders are expected to hold bilateral talks – specifically on the future of Syria.

U.N. Secretary-General Ban Ki-moon says the Syria’s five-year old military crisis can be resolved only politically – not with weapons.

The United States has protested the infusion of new arms to the Assad regime but Russia maintains it is only honouring existing military contracts with Syria, a longstanding military ally going back to the days of President Hafez al-Assad, the father of the current president.

According to U.S. intelligence sources, Russia is also continuing a military buildup in the port city of Latakia establishing new barracks that could accommodate up to 2,000 people, presumably Russians advisers.

Patrick Wilcken, Researcher, Arms Control, Security Trade and Human Rights on the Global Thematic Issues Programme at Amnesty International, told IPS the majority of weapons with rebel groups have been gained from “battlefield capture” — particularly, though not exclusively, of Iraqi military stocks, especially during IS’s advances in 2014, taking military bases/ stores from Falluja, Mosul, Tikrit and Ramadi – and also in Syria, from bases in Raqqa City and Tabaqa Airbase;

While it is virtually impossible to trace chains of custody of arms and ammunition in use by IS and other armed groups in Iraq and Syria, he said, it is possible to make a few general statements from evidence available (images, video and limited amounts of physical evidence collected by Conflict Armament Research (CAR).

Wilcken said the bulk of the weapons currently in circulation in Syria and Iraq are of Soviet/Warsaw Pact design/production, e.g. AK assault rifle variants, which have been produced around the world. It reflects the fact that both the Syrian and Iraqi militaries have a long history of Russian/Soviet supply.

When the Islamic State captured a treasure trove of U.S. weapons from fleeing Iraqi soldiers last October, one of the rebel leaders was quoted as saying rather sarcastically: “We hope the Americans would honour their agreements and service our helicopters.”

As fighter planes continued attacking IS targets, some of the U.S. airstrikes were, paradoxically, aimed at U.S.-made helicopters, Humvees, armoured personnel carriers and anti-aircraft artillery guns originally supplied to the Iraqi armed forces and currently deployed by the rebel group.

Not surprisingly, they are all under U.S. warranties for maintenance, repair and servicing.

AI’s Wilcken also told IPS the black market has thrived in Iraq since the fall of Saddam Hussein, and continues to thrive; there is some evidence of Syrian army corruption and supply of armed groups; recently manufactured Russian ammunition, for instance, has found its way into IS stocks, either through sale or capture.

“A lot of weapons interchange has come about through army defections and mergers of armed groups.”

And there appears to be a remarkable level of consistency in the armouries of all the main armed groups (i.e. mainly former Soviet stock with a smattering of NATO standard U.S. equipment) while early (2012-13) supplies of the so-called moderate armed groups in Syria came from Gulf states and Turkey and quickly proliferated to IS and others through battle field capture, affiliations or corruption, he noted.

In summary, he said “regional arms proliferation has a long pedigree – at least on the Iraqi side – and any future supplier states need to exercise extreme caution to prevent further regional proliferation and its catastrophic consequences.”

How much of this will wind up with rebel forces is anybody’s guess.