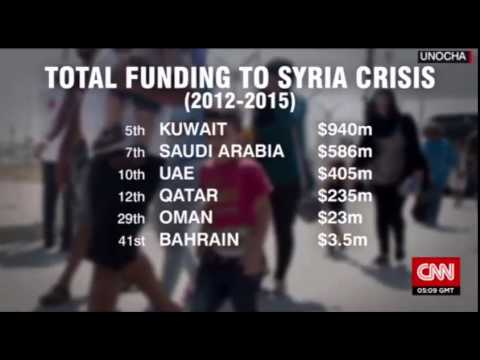 The violent civil war in Syria and rise of Islamic State (IS) has forced millions to flee their homes, cascading across Europe in search of safety. And yet, despite the crisis unfolding on its doorstep, the response from the Saudi Arabian government has been far from welcoming.

Why is it that Saudi Arabia, the home of the world’s largest oil supplies – a state with vast swaths of empty territory, has done so little to help?

The Saudi relationship with the Syrian crisis is complex – a tangle of domestic and regional priorities. Abroad, Riyadh wants to see the Assad regime toppled and Iran’s influence in the Levant weakened, but at home Saudi policy has been much more reactionary and conservative, working hard to quash dissent and maintain stability.

Donors from the other Gulf states have provided large amounts of money to the Syrian refugees, but Saudi Arabia has failed even to recognise the legal concept of refugee status and has not formally accepted any refugees. The Kingdom claims to have accepted millions, but has not done so under formal refugee status.

This in itself is hardly surprising, as Saudi Arabia is not party to the 1951 Convention Relating to the Status of Refugees. But it’s more than a legal matter: Saudi Arabia’s serious demographic concerns are at the very heart of its security calculations.

The country’s population is middling by global standards, currently standing at around 30m. But altering the domestic balance by providing refuge to those fleeing Syria, regardless of their ideology or political leanings, could throw the country’s domestic political and economic balance wildly off.

The Kingdom is also eager to maintain the balance between regime and society, while also negotiating increasingly volatile sectarian schisms: the population is estimated at 90% Sunni, with 1.5-2m Shia Muslims making up the bulk of the remainder. The imperative is to keep regional Sunni allies in power and to capitalise on any opportunity to oust rivals.

The situation facing Riyadh is increasingly precarious, a dropping oil price, an invigorated Iran, conflict in Yemen and the prevalence of IS in neighbouring Iraq and Syria. The last thing Riyadh needs is more domestic unrest.

The al-Saud regime is terrified of IS. Its violent fundamentalist reading of the Quran shares many similarities with the Wahhabi ulema, who are woven into the very fabric of the Saudi state.

In the face of opposition to their rule, the al-Saud family have traditionally relied on the centuries-old alliance with Wahhabi clerics to provide much-needed domestic legitimacy. The al-Sauds are also the protectors of Islam’s two holy mosques, Mecca and Medina.

While the quest for legitimacy is motivated primarily by domestic issues, it has also long guided foreign policy – particularly since the 1979 Iranian Revolution, since which Riyadh has been perpetually paranoid about Iranian aspirations to regional hegemony.

In the aftermath of the 2011 Arab Uprisings this rivalry morphed into proxy conflicts across Syria, Iraq, Yemen, and Bahrain. Sectarian divisions across the region were accordingly politicised and securitised as Saudi Arabia fought to keep its allies in power and the Iranian threat in check.

Saudi Arabia has long feared a galvanised “fifth column” in its Eastern Province, or across the King Fahd Causeway in neighbouring Bahrain, particularly as a Trojan horse for Iranian interference. These concerns are exacerbated by the sheer number of people fleeing Iraq and Syria, whose ideologies are unknown to Saudi Arabia.

IS has put the al-Saud regime in a bind, forcing it to choose between national stability and the anti-Shia rhetoric of the Wahhabi (and IS) doctrine.

Even with the reports that no refugees have been formally accepted into Saudi Arabia, there is some confusion as to how many Syrians have actually found a home in the country. The pan-Arab al-Hayat newspaper has reported that around 500,000 Syrians had found work (and homes) in Saudi Arabia since the explosion of violence in their home country.

Additionally, Saudi Arabia has offered to build a mosque in Germany for every 100 refugees that arrive in the country. Of course, that does not answer the question of who will deliver prayers at these mosques – Wahhabi imams, perhaps.

In order for Saudi Arabia to defeat IS, it must fulfil its humanitarian obligations and do what it can to resolve the Syrian crisis. Humanitarian actions can have strategic consequences. So can neglect.

As time passes and the Kingdom formally does very little to accommodate people fleeing Syria and Iraq, regional resentment of the al-Saud dynasty will only grow. While Saudi Arabia has historically provided huge amounts of financial aid to Lebanon, Yemen and Pakistan, the scale of the Syrian crisis requires a different type of response.

The House of Saud must come up with an explicit response and make a point of providing refuge to those fleeing the IS “caliphate”, Assad’s barrel bombs, or the sectarian militias of Iraq. If it doesn’t, it will pay the price in political legitimacy – not only within Saudi Arabia, but also across the Muslim world.

CNN: “Refugee crisis: Why aren’t Gulf states taking them in?”