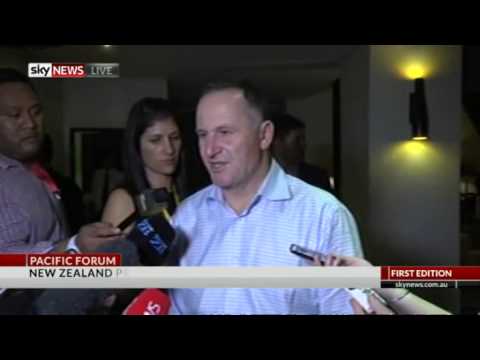 Pacific Island nations have stepped up pressure on their reckless neighbours, warning Australia and New Zealand that their inadequate action on climate change will doom island states – especially if they continue to ignore the call for a moratorium on new coal and the call to keep warming below 1.5DegC. Both Australia and New Zealand are trying to pretend they are doing their bit on climate change, but “inadequate” emissions reduction targets, routine creative accounting efforts, and greedy support for fossil fuel expansion continues to undermine real progress. Both countries have a history of bullying their small island state neighbours, and with Australia developing climate policy to protect the coal industry and New Zealand having no new policies to reduce emissions since 2008, they are likely to again throw their aid weight around to water down the final climate declaration. Kiribati President Anote Tong has warned that Australia and New Zealand could be asked to leave the forum if they don’t commit to stronger action on climate change, declaring that Kiribati cannot be “bought off” with aid.

Pacific Island nations are calling for a moratorium on new coal mines, and for governments attending the UNFCCC Paris talks to agree to hold warming below 1.5DegC. The Suva Declaration and the Smaller Island States Declaration set out similar calls for the action the world needs to take to protect their future. The Pacific Island Climate Action Network has also tabled a regional proposal to be discussed at this week’s Forum. But an Oxfam report warns of “fundamental differences” between the Island states and the two developed country forum members, Australia and New Zealand, particularly over climate change policy, where it describes them as “two of the worst performing governments”.

Friends don’t let friends drown. President Anote Tong of Kiribati, one of the lowest-lying island states in the world, and which has already been suffering from the effects of king tides, has urged Australia and New Zealand to “be real friends” on climate change. This means no more coal and oil expansion, no bullying and aid buy-offs at Pacific Island forums, and real, ambitious engagement at UN climate talks.

Fossil fuel expansion is fundamentally incompatible with climate action and protection of Pacific island nations. With their small island states facing record cyclones and rising tides, Pacific Island Leaders need Australia and New Zealand to step up climate action, not fill their coffers with fossil fuel profits and try to buy them off with aid. Both countries’ climate targets have been criticised as “inadequate”, and both are complaining that increasing their targets would cost too much, despite evidence to the contrary and vast sums still being spent subsidising fossil fuel exploration.