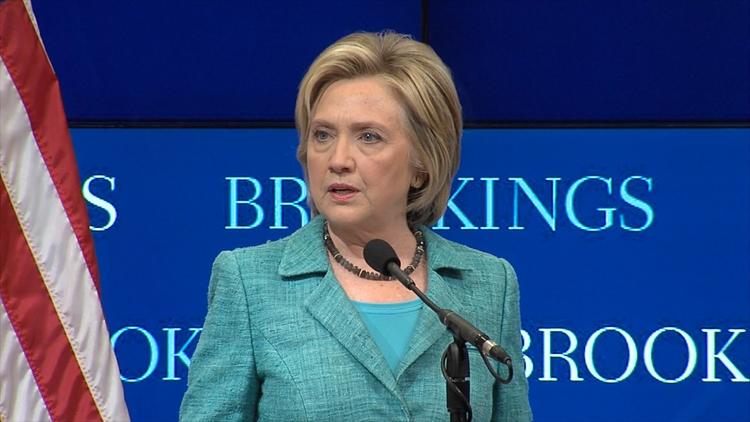 WASHINGTON — Hillary Clinton, the former U.S. secretary of state who is now a leading contender to be the next president, has called for a stronger response to Russia’s actions in Ukraine and Syria, saying Moscow’s objectives were “to stymie, to confront, and to undermine American power whenever and wherever.”

In thinly veiled criticism of President Barack Obama’s administration and its current approach to Russia, Clinton said that Washington should be doing more in response to Russia’s interference in Ukraine.

“I have been, I remain convinced that we need a concerted effort to really up the costs on Russia and in particular on Putin. I think we have not done enough,” she said following a speech on September 9 at the Brookings Institution, a Washington think tank.

“I am in the category of people who wanted us to do more in response to the annexation of Crimea and the continuing destabilization of Ukraine.”

Russia took over Crimea from Ukraine in March 2014, after sending troops and staging a referendum denounced as illegitimate by the United States and about 100 other countries.

The United States says Russia has sent troops and weapons into eastern Ukraine to support separatists in a conflict that has killed more than 7,900 people since April 2014.

“We can’t dance around it anymore. We all wish it would go away,” she said. “We all wish Putin would choose to modernize his country and move toward the West instead of sinking himself into historical roots of tsar-like behavior, and intimidation along national borders and projecting Russian power in places like Syria and elsewhere.”

The comments by Clinton, who served as Obama’s secretary of state from 2009 until February 2013, bore similarities to sentiments being voiced with growing frequency by other candidates, particularly Republicans.

Clinton faces several other Democrats also seeking the party’s nomination to be its candidate in the November 2016 election.

None of the announced candidates has had as much experience shaping Russia policy as Clinton, who helped put Obama’s first term “reset” of relations with Moscow in place.

Clinton said some achievements were made while Dmitry Medvedev was in office as Russian president from 2008-2012, including the New START nuclear arms-control pact and enhanced cooperation on transit of U.S. arms and materiel to Afghanistan.

But she said Putin’s return to the Kremlin changed that.

“I think Russia’s objectives are to stymie and to confront and undermine American power whenever and wherever they can. I don’t think there’s much to be surprised about them,” she said.

“We have to do more to get back talking about how to we try to confine, contain, deter Russian aggression in Europe and beyond,” she said. “And try to figure out what are the best tools for doing that. And don’t lose sight of the Arctic because we’re going to have a lot of issues up there as well.”

The Foreign Ministry has confirmed Russian military advisers were on the ground in Syria, and Reuters news agency quoted unnamed U.S. officials as saying that Russia sent two tank-landing ships and additional aircraft in the past day or so along with a small number of naval infantry forces.