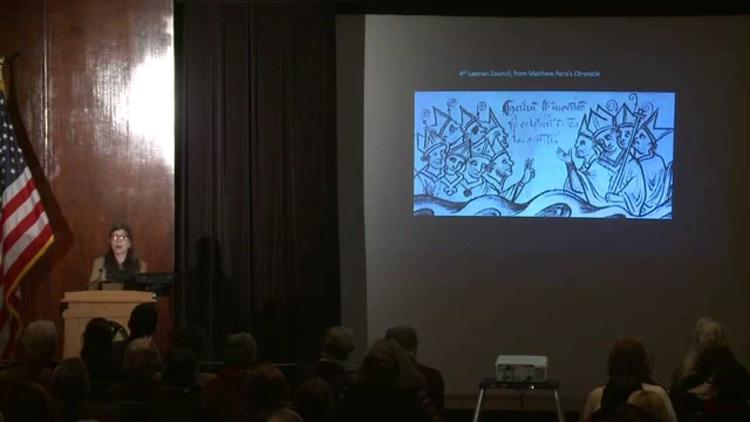 Let me put this right up front.  There is nothing whatever either in the Bible or in the canonical, fundamental assertions of Christian doctrine to support the prohibition of abortion at any stage.  On the contrary, there is quite a bit to support a pro-choice position.

The “pro-life” argument is two-pronged: the scientific or “common sense” assertion, and the Christian assertion of the sanctity of human life.

The second references the sanctity of every individual human being, an assertion at the center of the Christian message and supported by both scripture and accepted Christian doctrine.  According to this position, a pro-choice position repudiates 2000  years of essential Christian teaching.

Scriptural Support for the “Pro-life” Position

There isn’t any.  Voluntary abortion is not mentioned in either the Old or the New Testament.  Yes, the Bible tells us that God forbids murder.  But if abortion is murder, why does God not mention it?  Not once.  Induced abortions must have occurred or been attempted; abortion is hardly a modern invention.

The anti-abortion movement, however, is.  When pressed, proponents  do attempt to cite scripture, most frequently Psalm 139:

“Thine eyes did see my substance, and in thy book all my members were written, which in continuance were fashioned, when as yet there was none of them.” (16)

Although there’s nothing in this psalm about abortion, the “pro-life” position argues that the passage asserts the personhood of the fetus, and, therefore, by implication, supports the case against abortion.

But the subject of the psalm is divine omniscience, God’s ability to survey past, present and future (not-yet-existing).  To claim that a thought in the mind of God has the status of material existence (out of the mind of God and into the material world) is nonsense.  Trying to force divine omniscience into the anti-abortion cause is a sign of intellectual and moral desperation.

“Pro-life” Support in the Interpretive Tradition

There is little if any.  The belief that anti-abortion doctrine has always been firmly and centrally located in the main sources and articulations of Christian doctrine is simply bad history.  For the primary canonical interpreters of the Christian tradition show as little interest in the question of abortion as scripture does.

That is, until the latter part of the nineteenth century, after over 1800 years of effective silence on the subject, when Pope Leo XIII (who first inspired the observation, “Power corrupts, and absolute power corrupts absolutely”) declared the simultaneity of conception and personhood.  Thus leading to…

The Charge of Murder

Progressives, of course, deny the charge.  But on an ideological and philosophical level, their response has been feeble.  They need to take the charge seriously.

Murder is, after all, the unjustifiable killing of an innocent human being, and that being’s temporary location, state of helplessness, or the inconvenience it might later cause are irrelevant to its moral right.  Unless it can be shown that the blastocyst is not a person, the pro-choice position surrenders its philosophical and moral credibility.  But, in fact, that can be proven, not only in scientific terms but in Christian terms, Leo XIII or no Leo XIII.

What is strange about the debate so far and the stalemate among the well-meaning is the refusal of both sides to engage in the obvious, central, underlying question: “What is a person?”  A popular trope in science fiction, the problem of defining personhood has so far eluded a consensus of modern philosophers.  But to answer the “pro-life” charge of murder, we must have a plausible, usable (even if provisional) notion of what a person is.  How else can we know if abortion involves killing one?

But if scripture and theological reflection upon it show little interest in abortion, the tradition has quite a lot to say about the nature of personhood.  And what it has to say is devastating for the anti-abortion position, which from this perspective is, in fact, heretical, not an upholding, but a repudiation of central Christian assertions.

Personhood, according to Christian doctrine supported by scripture, is the miraculous union of a mortal body, brought into existence through natural processes, and an immortal soul, created by God.

From this perspective, the anti-abortionist attributing personhood to the zygote is guilty of what has been called the “biological fallacy,” the equation of “person” with the physical body.

Augustine, Scripture, and the Biological Fallacy

This fallacy was explicitly and cogently rejected by St. Augustine of Hippo:

“It is not the act of mating, or the insemination that matters, it is God who gives the form.  It is not the mother, who conceives, carries, bears, and feeds that matters, it is God who effects the miraculous combination of an immaterial with a material substance, with the former in command, the latter in subjugation.  God unites them to make a living soul.” (City of God XXII, 24)

The point is that a viable body must precede the soul, just as God first molded Adam before breathing life into him.  In practice the Catholic Church agrees.  In tacit recognition of the biological fallacy, the Church has never authorized the baptism of fetuses or zygotes.  It certainly has never baptized embryos, not before Leo’s pronouncement, not after.

When Does Ensoulment Occur?

This is an important issue.  The question, “when?” figures in every legislative attempt to limit abortion.  It enables anti-abortionists to argue that even if we do not know, we cannot take a chance.  The fetus, the embryo, even the zygote just might be a person, so we must treat it as if it were.

Augustine in fact admits his own ignorance:

“As for abortions which have been alive in the mother’s womb but have died there, I cannot bring myself either to affirm or deny that they will share in the resurrection.” (XXII, 13)

As far as Augustine is concerned, ensoulment could well occur at birth.  If it occurs before, Augustine does not provide much guidance or show any interest in the exact moment.  But then, Augustine is not really interested in voluntary abortion.

We are not, however, left completely in the dark.  For when we consider what the soul is, we can, using Augustine, work out a clear logical inference.

According to Genesis, God created man in his own image.  But what is meant by “in the image of God”?  Augustine glosses the concept with a terse citation from St Paul: “This can be taken as referring to the inner man.”

Then to the question of what God–of which the inner man is an image–is like, Augustine replies: “a kind of Mind” (XXII, 20)

What God does when he creates a person by that miraculous combination of an immaterial with a material substance is thus to install “a kind of mind.”

But every human mind to which we have access arrives seated in a physical body.  And a prerequisite for a mind, therefore, a person, is an adequately developed brain and central nervous system.  Ensoulment, then, cannot occur until at the sixth month of pregnancy at the earliest.

Augustine does not make explicit the mind/brain implication.  But, with perfect consistency, Dante does, even a thousand years later.  In the Purgatorio Dante provides a clear, moving summation of this whole line of thought, and in his summation synthesizes the best scientific and philosophical understanding of his time as he describes the development of a human being from ensemination to ensoulment:

“…once the brain’s articulation in the embryo arrives at its perfection the First Mover turns to it, rejoicing in such handiwork of nature, and breathes into it a spirit, new and full of power, which then draws into its substance all it there finds active and becomes a single soul that lives, and feels, and reflects upon itself.” trans. Sinclair Purgatorio XXV (69-75)

Like Augustine, Dante does not address abortion, and cannot be accused of arguing backward from a pre-existing opinion on that subject.  His concern is to explain the unique human individual and that individual’s eternal fate, distinguishing Christian teaching from all of those other religions that see the end of life as the absorption of the individual into some vast cosmic wholeness.

While not addressing the issue of abortion, Dante yet presents a potent, preemptive refutation of Leo XIII’s assertion of the biological fallacy, in essence the biological heresy.  In his Divine Comedy Dante is defending “a doctrine essential to a Christian view of things–the direct and independent creation of the individual soul, as against the heresy that the sould comes into being like the body, by mere natural descent.” (italics mine) trans. Sinclair Purgatorio 1334

This, then, is the central Christian doctrine, sustained and refined for over 1800 years of teaching until repudiated by Leo XIII and dutifully, uncritically, and in ignorance of their own tradition repeated by every Christian anti-abortionist, Protestant as well as Catholic from sidewalk harassers to presidential hopeful Huckabee.

My concern here has been to confront anti-abortionists on the ground they claim to own–the traditions of Christian teaching.  One does not have to be a Christian, after all, to call attention to their betrayal of the tradition they claim to defend.  But skeptical secularists should note and appreciate the anticipatory consistency of Augustine with modern neuroscientists, who are unanimous regarding the developmental sequence from conception to viability, and the implication of that sequence for personhood.  In the word of Michael S. Gassaniga, one of the best:

“The fertilized egg is a clump of cells with no brain; the processes that begin to generate a nervous system do not begin until after the 14th day.  No sustainable or complex nervous system is in place until approximately six months of gestation.

“In judging a ‘fetus’ and granting it the moral and legal rights of a human being I put the age much later [than 14 weeks] at 23 weeks when life is sustainable and the fetus could, with a little help from a neonatal unit, survive and develop into a thinking human being with a normal brain.”  “The Thoughtful Distinction between Embryo and Human,” Chronicle of Higher Education 4/8/2006

Progressive secularists might also appreciate the probability that Augustine, a master of philosophical analogy, would no doubt have been comfortable with comparing the relationship of software to hardware with the relationship of mind/soul to body.  A computer comes alove when software is installed into a material object engineered with a complexity and precision capable of accepting the software.  Hardware first, software second.

As St. Paul says: “the spiritual does not come first, the physical body comes first, and then the spiritual.” 1 Corinthians 15:35

On the question of personhood there is obviously much more to be discussed than there is room for here.  But the point to be made in this space is that for too long pro-choice defenders have given modern popes, Huckbees, their followers and their fellow travelers, a free pass on a specious, indeed heretical misrepresentation of traditional Christian principles.

Is abortion murder?  You have been misinformed.  An accurate reading of the Christian tradition says no; it is not.

Library of Congress: “Law in the Lives of Medieval Women: Beyond the Magna Carta”