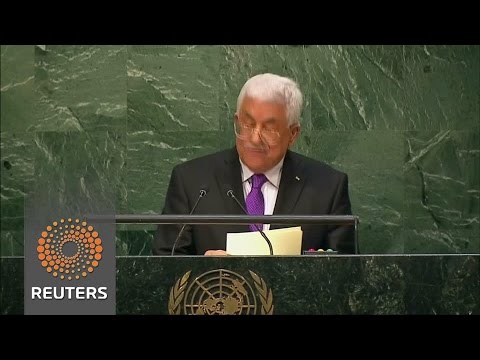 Mahmoud Abbas, president of Palestine, renounced the Oslo Peace accords Wednesday, on the grounds that Israel itself has long since reneged on every key provision in that agreement. Abbas said,

“Thus, we declare that as long as Israel refuses to commit to the agreements signed with us, which render us an authority without real powers, and as long as Israel refuses to cease settlement activities and to release of the fourth group of Palestinian prisoners in accordance with our agreements, they leave us no choice but to insist that we will not remain the only ones committed to the implementation of these agreements, while Israel continuously violates them. We, therefore, declare that we cannot continue to be bound by these agreements and that Israel must assume all of its responsibilities as an occupying power, because the status quo cannot continue and the decisions of the Palestinian Central Council last March are specific and binding.”

As one might expect, the American press reported in its headlines that Abbas was tearing up the accords (NYT), that he had hurt his reputation (Chicago Tribune), that it didn’t matter what he did (The Atlantic), that his complaints about the ethnic cleansing of and Apartheid imposed on Palestinians were unreasonable (The Atlantic), etc., etc. Most of these headlines and articles are frankly dishonest, and a form of pro-Israel propaganda.

In return for recognizing Israel and making peace, the Palestine Liberation Organization was promised by Israel in the Oslo Accords of 1993 and 1995 that Israel would withdraw from the occupied West Bank in three phases, ending by 1999, that it would cease sending in Israeli colonists to steal Palestinian land, that it would release Palestinian political prisoners, that it would allow a corridor for Gaza-West Bank connections, and so forth.

The agreement implied that the newly created Palestine Authority (which Palestinians now prefer to call simply Palestine) would police Palestinians for Israel. That expectation is the only thing in the agreements to which Israel is still committed, and Abbas is threatening to stop serving Israel in this way.

The PLO web site lays out the main ways in which Israel has reneged on its treaty commitments:

“1. Israel Has Failed to End its Occupation

2. Israel Continues to Build and Expand Its Illegal Colonies

(“It doubled the number of settlers living in the West Bank and Gaza Strip. There are now approximately 400,000 . . . Confiscated more than 60,000 acres of Palestinian land for colony construction and related by-pass roads, uprooted 220,000 trees and demolished 690 homes in the West Bank alone . . .”)

3. Israel Fails to Withdraw from Palestinian Territories (. . . The Palestinian Authority has only full jurisdiction over 17.2 percent of the West Bank.”)

Whose fault is all this. Unambiguously, it is that of the Israeli government. Entirely. It met none of its obligations.

Current Israeli prime minister Binyamin Netanyahu, an extremist and supremacist, virulently opposed the accords at the time and has done everything he could to destroy them, because he wants to annex the West Bank to Israel and expel its millions of Palestinians or keep them in a chattel-like state of statelessness.

Netanyahu was caught on video boasting about how he had derailed the accords, already in 2001, and his tenure as prime minister has allowed him to finish the job.

“Netanyahu: I Deceived the US to Destroy Oslo Accords. English Subtitles”

When you destroy a peace treaty and derail a peace process, guess what you get instead?

Netanyahu made it clear he thinks Americans are suckers he can easily manipulate. He has on more than one occasion attempted to entangle us in wars for his benefit. When civil war breaks out in the West Bank, he expects us to bear the costs of it. Because we’re suckers.