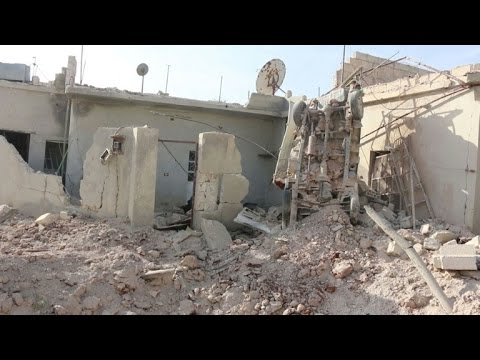 I just watched the 5 pm news hour on CNN anchored by Wolf Blitzer, and the editors had clearly decided that the lead was that Russian bombing in south Aleppo risks creating a new wave of refugees. They also stuck to the cover story that the Russians are only attacking the “moderate rebels.”

American bombing of populated areas has never been reported in that way on mainstream cable news. The US bombing that killed Sanafi al-Nasr, said to have been the no. 2 man in the Syrian branch of al-Qaeda, the Support Front, was reported on the same show as a great victory. But was he in a completely deserted area? Were any civilians killed around him? It has now come out that most US drone strikes don’t even kill the intended target; probably it is the landlord’s family that mainly dies. Was al-Nasr a renter?

Nor did CNN lead with civilian casualties when it covered Israeli PM Netanyahu’s bombardment of defenseless little Gaza in summer of 2014.

Russian bombing of populated areas, like all such bombing, is killing civilians, of course. The point isn’t that CNN is wrong but that it is selective.

“The Syrians have found that the Russians do not want to fire at targets in built-up areas; they intend to leave burning hospitals and dead wedding parties to the Americans in Afghanistan. This policy could always change, of course. No air force bombs countries without killing civilians. Nor without crossing other people’s frontiers. But the Russians are now telling the Turks – and by logical extension, this information must go to the Americans – their flight coordinates.”

Note that the Syrian regime has been dropping barrel bombs on civilian areas for years now and no CNN news hour has begun with this headline. It appears to me that they mind when Russia bombs, but not when anyone else does. I should underline that I oppose the Russian intervention in Syria and think it will likely go to dark places. But I also insist that it be reported and analyzed exactly as actions of the US and its allies are. And this is clearly not the case. The Fisk point of view should be reported, as I just did, even if one has reservations about it (as I do).

As for the “moderate rebels,” who have suddenly reappeared in American official discourse only after Russia intervened, former Chairman of the Joint Chiefs of Staff Gen. Martin Dempsey wrote Congress in fall of 2013 that he did not want to intervene in Syria because he could not be sure that the victorious rebels would support US interests:

” In an August 19 letter to Representative Eliot Engel, obtained by the Associated Press, Gen. Dempsey effectively ruled out even limited intervention, including US cruise missile attacks and other options that wouldn’t require US troops on the ground. “Syria today is not about choosing between two sides but rather about choosing one among many sides,” he said. “It is my belief that the side we choose must be ready to promote their interests and ours when the balance shifts in their favour. Today, they are not.”

What he was saying was that by the middle of 2013, the democratic forces in the Free Syrian Army had either collapsed or their units had joined or closely allied with one of the two major al-Qaeda offshoots, Daesh (ISIS, ISIL) or the Support Front (Jabhat al-Nusra, which reports to al-Qaeda 9/11 mastermind Ayman al-Zawahiri).

There are lots of small rebel groups in the hinterlands of Homs, Hama and Aleppo and in Idlib province who are not al-Qaeda. But most have become hard line Salafis a la Saudi Arabia who want sharia law and allow as how they might not kill all the Alawis, Christians, Druze and other minorities that come under their rule but keep them as second class citizens under a dictatorship. Some are still Muslim Brotherhood, some of whom want a Muslim state but with elections.

However, these groups are small and not very effective fighters, and have been forced to ally with al-Qaeda to avoid being killed by the Syrian Arab Army and in hopes of taking more territory. Moreover, the amount of Syrian territory now held by rebels who want democratic elections and full legal equality for all Syrians would be in my estimation zero percent. Almost all Syrian rebels now want a society ruled by sharia or a hard line medieval notion of Islamic law. (Sharia itself, as private practice and individual choice, is as inoffensive as Jewish Halakha or Roman Catholic canon law; but making a fundamentalist interpretation of it the basis for national law is a whole set of human rights crimes waiting to happen).

Note the irony. The same GOP politicians who denounce all US Muslims for allegedly wanting to impose sharia or Muslim law on all Americans are talking about the Syrian rebels who want a sharia society as “moderates” and “US allies” being targeted by Russia. (The allegation about American Muslims, who in my experience love the US constitution half to death, is incorrect).

When Wolf Blitzer interviewed Rep. Adam Schiff, he asked a leading question about the Russians attacking the “moderate rebels.” Schiff concurred that that was what Moscow was doing, and spoke of these forces as being backed by US allies in the Gulf. He did, however, veer off script by admitting that Russia is also attacking al-Qaeda in Syria. He complained, however, that Russia is not attacking Daesh/ ISIL.

Russia is, of course, occasionally bombing Daesh. But that organization mainly holds territory in the far east of the country away from the western population centers. It is Syrian al-Qaeda that holds a great deal of Idlib Province and spearheads the Army of Conquest coalition of Salafi jihadis who control the rest of Idlib Province.

So why is it objectionable that Russia is attacking an organization reporting to al-Qaeda chief Ayman al-Zawahiri, who killed nearly 3,000 Americans in 2011? Or that Russia is attacking groups that have political or tactical alliance with al-Qaeda in Syria? Wouldn’t that make them like the Taliban in Afghanistan? Is the US wrong to bomb the latter, on the grounds that they were only allied with al-Qaeda?

And how can the same news hour report positively on the killing by American bombing of al-Qaeda’s al-Nasr and slam the Russians for bombing . . . al-Qaeda?

This isn’t news reporting. This is government propaganda.