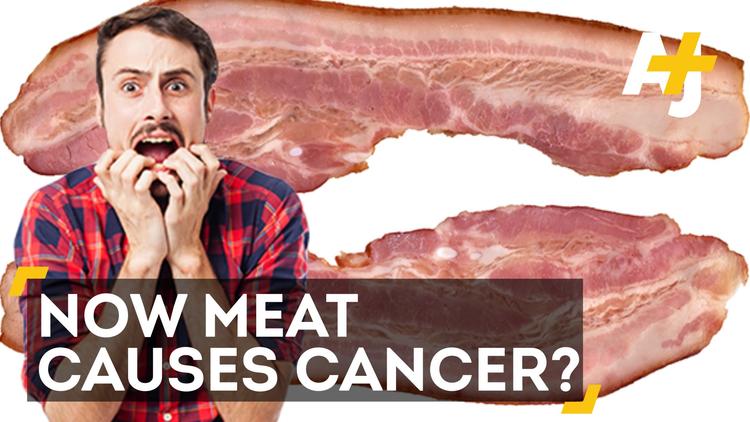 Processed meats have been placed in the same health risk category as smoking and asbestos by the cancer research body of the World Health Organization (WHO) on Monday.

Products that have been salted, cured, or otherwise processed to enhance flavor are “carcinogenic to humans,” the Paris-based International Agency for Research on Cancer (IARC) found in its report, published in the Lancet Oncology. That puts processed meat in the Group 1 carcinogenic category alongside substances like tobacco, alcohol, and plutonium. And non-processed fresh meats like beef, pork, and lamb, among others, are “probably carcinogenic to humans,” the agency said.

Each 50-gram portion of processed meat eaten daily—including bacon, sausages, and ham, as well as canned meat and meat-based sauces—increases the risk of colorectal cancer by 18 percent, according to the IARC’s report, Carcinogenicity of Consumption of Red and Processed Meat. The report was crafted by 22 international health experts for the IARC Monograph Program, which evaluates environmental causes of cancer in humans.

“For an individual, the risk of developing colorectal cancer because of their consumption of processed meat remains small, but this risk increases with the amount of meat consumed,” said Dr. Kurt Straif, head of the IARC Monograph Program. “In view of the large number of people who consume processed meat, the global impact on cancer incidence is of public health importance.”

The IARC’s findings (pdf) come just months after the top U.S. nutritional panel, the Dietary Guidelines Advisory Committee, reported that Americans must reduce their meat intake and switch to sustainable, plant-based diets to curb greenhouse gas emissions and stave off the rise of preventable chronic diseases like diabetes and certain types of cancer.

President Barack Obama responded to that report, released in February, by vowing to consider the environment in its 2015 Dietary Guidelines for Americans (DGA), due later this year. But heavy lobbying by the meat industry in the interceding months led the Obama administration to rescind its promise—a move that climate and public health advocates called “disappointing” and “politically motivated.”

Meat consumption is increasing in low- and middle-income countries, the IARC stated on Monday (pdf). Citing the Global Burden of Disease Project, an independent research organization, the IARC reported that about 34,000 deaths per year can be attributed to diets with a heavy processed meat intake.

AJ+: “Red Meat & Bacon As Carcinogenic As Cigarettes And Plutonium”