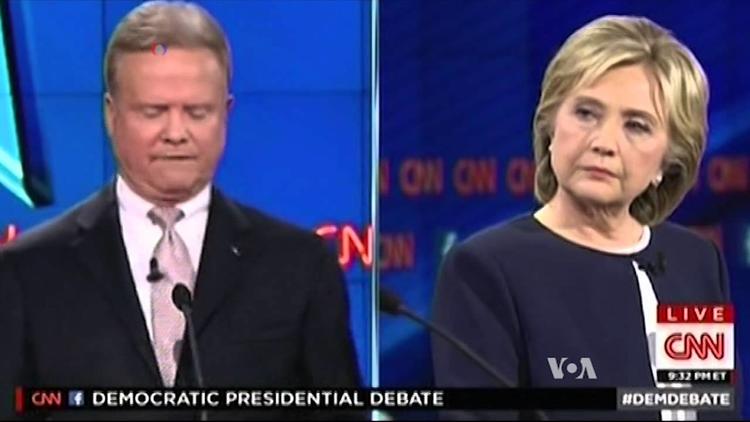 Foreign policy came up a bit in the Democratic Party debate.

One form it took was a series of clashes over Hillary Clinton’s 2002 vote to authorize the Bush Iraq War. Lincoln Chafee, then a Republican senator, opposed that vote and was the only Republican senator to do so. He said he had done his homework and had concluded that there was no real evidence that the Saddam Hussein regime had unconventional weapons. He slammed Sec. Clinton for poor judgment in that vote. Bernie Sanders had also opposed the Iraq War, but did not seem as eager to make it an issue of character and judgment as Chafee.

Sec. Clinton did not have much to say in her defense, having already admitted years ago that it had been a mistake. My guess is that public passions on Iraq have died down since the issue fed into her defeat in 2008, and that it wouldn’t be the issue that sunk her with the Democratic primary voters this time around.

Sec. Clinton when asked what enemies she was proud to have made, mentioned among them “Iran.” Since she supported the nuclear deal, it is not clear why she brought this up, except to please the Israel lobbies and her billionaire Israeli-American backer, Haim Saban. She once threatened Iran with being nuked (not a strong argument to that country for nonproliferation), and seems to have a “thing” about that country or at least to want her constituents to think she does.

Then Russia in Syria came up. Sec. Clinton said that she’d had some success dealing with Dmitry Medvedov, Russia’s current prime minister, when he was president. She then added,

There’s no doubt that when Putin came back in and said he was going to be President, that did change the relationship. We have to stand up to his bullying, and specifically in Syria, it is important — and I applaud the administration because they are engaged in talks right now with the Russians to make it clear that they’ve got to be part of the solution to try to end that bloody conflict.

And, to — provide safe zones so that people are not going to have to be flooding out of Syria at the rate they are. And, I think it’s important too that the United States make it very clear to Putin that it’s not acceptable for him to be in Syria creating more chaos, bombing people on behalf of Assad, and we can’t do that if we don’t take more of a leadership position, which is what I’m advocating.

There really is no substance in this set of remarks. It is not clear what it would mean to “stand up to” Putin’s “bullying.” President Obama has already made it clear that he isn’t going to try to interfere in Russia’s Syria intervention. So aside from rebuking Mr. Putin, it is not clear what else Sec. Clinton is proposing.

The second point is to “engage in talks” with Moscow to insist that it be “part of the solution” in Syria. Again, these phrases have no real practical meaning.

Then she said that safe zones should be provided for internally displaced Syrians. But as many military analysts have pointed out, these “safe zones” would attract rebels who would use them as bases from which to attack the regime, inviting regime attacks. They would only remain safe zones if some military force guarded their perimeters. But which military force would undertake that task? She admitted that no one is talking about putting US troops in Syria.

So there can’t actually be any safe zones.

She wants to take “more of a leadership position” but aside from posturing made no indication of what that would be. I don’t think Vladimir Putin responds to rebukes.

In the past, she wanted to arm the Syrian rebels, which the CIA is now doing via the Saudis, though some of those arms are clearly going to Salafi allies of al-Qaeda in Syria. It is not clear if she still stands behind this policy or is aware of the importance of al-Qaeda in western Syria or has any idea of what to do about it.

She came back later to say:

“You know, I — I agree completely. We don’t want American troops on the ground in Syria. I never said that. What I said was we had to put together a coalition — in fact, something that I worked on before I left the State Department — to do, and yes, that it should include Arabs, people in the region.

Because what I worry about is what will happen with ISIS gaining more territory, having more reach, and, frankly, posing a threat to our friends and neighbors in the region and far beyond.”

The 2011-2012 coalition on the ground, the Free Syrian Army, to which Sec. Clinton refers here, has long since collapsed, and a Pentagon attempt to revive it just crashed and burned. So I’m not sure why Sen. Clinton thinks this is still a policy option. Many FSA units joined Daesh/ ISIL. Others have been defeated by the Army of Conquest, a hard line Salafi group spearheaded by al-Qaeda in Syria.

If Sec. Clinton wants to ally with allies of al-Qaeda, we should know that.

Then the Syria question went to Sen. Bernie Sanders, who said this:

I’m the former chairman of the Senate Veterans Committee, and in that capacity I learned a very powerful lesson about the cost of war, and I will do everything that I can to make sure that the United States does not get involved in another quagmire like we did in Iraq, the worst foreign policy blunder in the history of this country. We should be putting together a coalition of Arab countries who should be leading the effort. We should be supportive, but I do not support American ground troops in Syria.

COOPER: On this issue of foreign policy, I want to go to…

CLINTON: …Well, nobody does. Nobody does, Senator Sanders. ”

Actually Lindsey Graham and John McCain do seem to want to.

Sen. Sanders is correct that Syria is extremely complex. As far as I can understand from his response, his policy toward Syria would be completely hands off.

But if he is saying that he is just against US troops in Syria, then Sec. Clinton is correct that this position is shared among all the Democratic candidates. In any case, Sanders did not actually lay out a policy toward Syria, just denounced the straw man of US troops going in there, which is not a serious proposal. Even Putin doesn’t want to send in infantry battalions (he is putting in a few marines to guard a military airport).

Later Sanders came back to slam the idea of a US-backed ‘no fly zone’ in Syria.

SANDERS: Let me just respond to something the secretary said. First of all, she is talking about, as I understand it, a no-fly zone in Syria, which I think is a very dangerous situation. Could lead to real problems.

He seemed to dismiss Bashar al-Assad as a real threat to the US of any sort, implying that there was no reason to attempt regime change. Then he spoke of President Obama’s dilemma:

“SANDERS: I think the president is trying very hard to thread a tough needle here, and that is to support those people who are against Assad, against ISIS, without getting us on the ground there, and that’s the direction I believe we should have (inaudible).”

So Sanders, like Clinton, seems to support Obama’s support for the so-called “moderate” rebels in Syria.

But as far as I can see, what I would call moderates– people who believe in a rule of law, rights for religious minorities and women, and democratic elections, no longer hold any significant territory in Syria. The two big rebel blocs are Daesh/ ISIL and the Army of Conquest, which is spearheaded by al-Qaeda and comprises hard line Salafis. I am disappointed with Obama’s pretense that there is a big group of ‘moderates’ with which the US can effectively ally, and would be sorry to see Clinton and Sanders adopt this frankly dishonest discourse.

One problem with Sanders’ apparent isolationism on this issue is that polling shows that the US public is deeply alarmed by Daesh (ISIS, ISIL). So it isn’t clear that a policy of not doing anything about the latter is politically viable. President Obama’s response to this quagmire waiting to happen is some fairly pro forma bombing raids that have a containment effect but little more. Sanders had supported those bombing raids as far as Iraq goes; not sure what he thinks of bombing Raqqa.

So the long and the short of it is that neither of the two leading candidates in the polls made any concrete or practical proposals for policy toward Syria. I think that is fine. I myself don’t see a lot of policy options in Syria. It is just that I think they owe it to voters to be more clear if that is what they are saying.

I was also disappointed that no reporter brought up the central conundrum for the US in Syria today, which is whether to support a coalition of which al-Qaeda forms a central part against the al-Assad regime. As far as I can tell, that is what President Obama is doing behind the scenes, via Saudi Arabia and Turkey. Sec. Clinton seems to have said she approves of Obama’s policies, so maybe she is all right with this approach. I’m not sure Sanders understands that this is what is going on; he also seemed sympathetic to the current Obama approach.

But because the CNN reporters framed Syria mainly with regard to Russia, or in some vague way, and did not go into such details as al-Qaeda being an major part of the rebel opposition, we didn’t get to hear where the candidates stand on it.