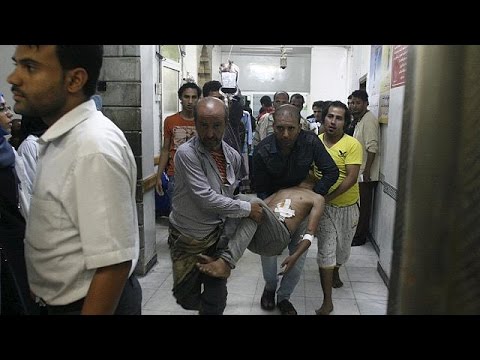 (Sanaa) – The airstrikes by a Saudi-led coalition on a hospital in northern Yemen supported by Doctors Without Borders (Medecins Sans Frontiers, MSF) on October 26, 2015, was in apparent violation of the laws of war. The attack with a half-dozen bombs destroyed Haydan Hospital, the only medical facility in the town of Haydan in the northern governorate of Saada, about 30 kilometers from the Saudi border. Two patients were injured during the evacuation of the hospital.

The MSF Yemen country director, Hassan Boucenine, told Human Rights Watch that the first strike hit the left wing of the building at about 10:30 p.m. After the first explosion, all of the patients and staff members in the hospital – there were at least 12 at the time – fled the building. Aircraft then dropped about five more bombs on the hospital, including two that did not explode and are still in the building.

“The bombing of a hospital is shocking amid increasing reports in Yemen of civilian deaths from coalition airstrikes,” said Joe Stork, deputy Middle East director. “Bombing a hospital sends a message that all medical facilities, health workers, and patients are at grave risk.”

Boucenine said that, as is standard practice to avoid becoming a target, MSF had first supplied the health center’s coordinates to the coalition about six months ago and reconfirmed them at least once a month since then. The hospital had the MSF logo and name painted on its roof.

Haydan Hospital receives support, including funding to cover staff salaries and medical supplies, from MSF, Boucenine said. It is the only medical facility within an 80-kilometer radius, and usually receives about 150 emergency cases a week. Since May 2015 the facility has treated about 3,400 wounded. The facility is now closed.

A Yemeni Health Ministry official told MSF that the attack completely destroyed the emergency room, outpatient and inpatient departments, lab, and maternity ward, and severely damaged the windows and walls of the building. The only departments that were undamaged were the x-ray department and the medical staff room.

Brig. Gen. Ahmed al-Assiri, the coalition military spokesman, told Reuters that “coalition jets had been in action over Saada governorate” but had not hit the hospital.

Since the beginning of the Saudi-led coalition air campaign on March 26, Human Rights Watch has documented more than two dozen airstrikes that appeared to be in violation of the laws of war. Human Rights Watch has not been able to ascertain that Saudi Arabia or other coalition members are investigating a single airstrike. In some instances the coalition has denied that the attacks Human Rights Watch documented were unlawful, but has not provided information to support those claims. The coalition should open an impartial, thorough, and transparent investigation into the bombing of Haydan Hospital to establish the circumstances of the attack, and make its results public. Anyone responsible for committing a war crime should be fairly prosecuted.

International humanitarian law, or the laws of war, applies to all sides in the fighting in Yemen. Deliberate or indiscriminate attacks against civilians and civilian structures are prohibited. The laws of war require that the parties to a conflict take constant care during military operations to spare the civilian population and to “take all feasible precautions” to avoid or minimize the incidental loss of civilian life and damage to civilian objects.

Hospitals and other medical facilities are civilian objects that have special protections under the laws of war. They only lose their protection from attack if they are being used, outside their humanitarian function, to commit “acts harmful to the enemy.” Even if military forces use a hospital to store weapons or deploy able-bodied combatants, the attacking force must issue a warning to cease this misuse, setting a reasonable time limit for it to end, and attacking only after such a warning has gone unheeded.

The United Nations Security Council should remind all parties to the conflict in Yemen, including coalition members, that anyone responsible for “planning, directing, or committing acts that violate applicable international human rights law or international humanitarian law, or acts that constitute human rights abuses” is potentially subject to travel bans and asset freezes under resolution 2140. The resolution, passed in February 2014, established a sanctions committee with a mandate to sanction individuals found to be engaging in or providing support for acts that threaten the peace, security, or stability of Yemen.

The coalition has carried out many strikes near Haydan Hospital since the beginning of the war, Boucenine said. He added that the hospital is in a village of mostly clay huts in which there was no fixed military target in the vicinity. There have been no allegations that Houthi forces are in the area or that the hospital was being used for military purposes.

The Saudi-led coalition, which includes the United Arab Emirates, Bahrain, Egypt, Jordan, Kuwait, Morocco, Qatar, and Sudan, has conducted an aerial campaign since March 26, 2015, throughout Yemen against Houthi forces, also known as Ansar Allah, who have controlled much of Yemen since late 2014.

The United States has said that it is providing the coalition with logistics and intelligence support. The United Kingdom has said that it is “providing technical support, precision-guided weapons and exchanging information with the Saudi Arabian armed forces through pre-existing arrangements.” Providing direct support to military operations, such as information on targets and refueling aircraft, could make the US and the UK parties to the armed conflict, and bound to apply the laws of war, including the obligation to investigate alleged violations.

The Houthis and other forces have also been responsible for indiscriminate attacks and other laws-of-war violations, Human Rights Watch said. Houthi and allied forces and opposition militias have engaged in military operations around Aden, Taizz, and other areas that have repeatedly put civilians and civilian structures such as hospitals at unnecessary risk.

“Again and again, we see coalition airstrikes that smack of violations of the laws of war, but we see no investigation into possible violations,” Stork said.