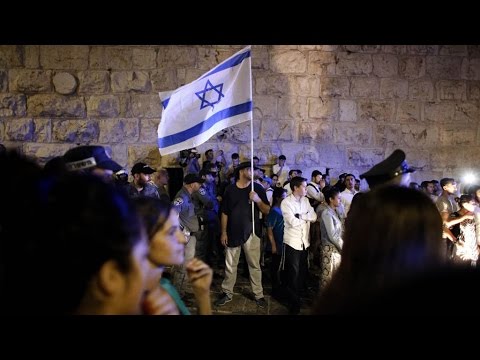 BETHLEHEM (Ma’an) — At least 499 Palestinians have been injured in clashes with Israeli soldiers and settlers across the occupied Palestinian Territory since Saturday, the Palestinian Red Crescent said on Monday.

Spokesperson Errab Foqoha told Ma’an that at least 41 Palestinians had been shot with live rounds, while 143 were injured by rubber-coated steel bullets.

She said that some 297 Palestinians had suffered excessive tear gas inhalation, while another 18 were injured when they were physically assaulted.

Israeli forces have also killed two Palestinians, including a 13-year-old boy, in fierce clashes that have swept across the occupied West Bank and East Jerusalem since Friday.

The Palestinian Red Cross on Sunday declared a state of emergency across the occupied Palestinian territory, and said it was putting all its staff, teams and volunteers on standby.

It decried Israeli “violations” of humanitarian law, and called on the international community to take the “necessary steps” to make Israel comply with international law.

Tensions had been steadily mounting in recent weeks due to Israeli restrictions on Palestinians seeking to enter the Al-Aqsa Mosque compound in East Jerusalem.

However, it was violent Israeli reprisals that were carried out in the wake of two separate attacks that killed four Israelis last week, that prompted the latest clashes.

There have been warnings in Israeli media of a “third intifada,” with Israeli daily Haaretz writing: “Perhaps it will take just one more death, on either side, for all hell to break loose in a cycle of vicious retribution.”

However, the newspaper also noted that “the extent of current violence doesn’t come close to that which took place in 1987 and 2000, when the previous two intifadas broke out.”

On Sunday, the PLO warned that attacks by both Israeli soldiers and settlers indicated “the Israeli government is deliberately creating a situation of violence and instability that threatens to spiral out of control.”