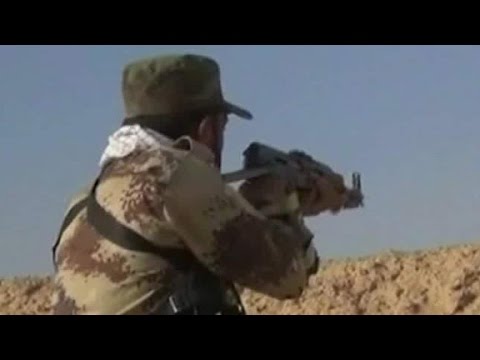 Alarabiya television is reporting 16 new casualties in Syria since October 9 among Iranian fighters there. There are thought to be some 1,500 Iranian military personnel in Syria, though some of these are actually Afghans. Several of those Iranian personnel killed during the past 2 years have been high-ranking officers of the Iranian revolutionary Guards Corps.

AFP Arabic is saying that Russian airstrikes have forced “a large number” of Daesh (ISIS, ISIL) fighters and their families, especially foreigners, to flee Syria for Western Iraq.

On Monday, the deputy commander of the Iranian Revolutionary Guards Corps, Brig. Gen. Husayn Salami, gave a wide-ranging interview on the Vision of the Islamic Republic of Iran Network 2, a transcript of which was translated by BBC Monitoring. I have often complained at this blog that the US press follows the government line too much, and seldom lets us hear voices branded “enemy” voices. For that matter we almost never see English translations of speeches even by American allies such as French President Francois Hollande. So I thought it is worthwhile sharing some of what Salami said, so we can see what the Iranian hardliners are thinking about Syria. I personally think the Iranian backing for the Baath regime of Bashar al-Assad is shameful, but we should try to understand it nevertheless.

Here are some excerpted highlights, especially Salami’s own words, as translated by BBC:

Salami said that Syria was the “focal point of strategic efforts made by an international coalition” to implement a “destructive political scheme in the Islamic world” [he means the USA, Western Europe, and Saudi Arabia]. He alleged that the US wanted to overthrow the Syrian government so as to put into practice its “political and security goals” in Lebanon and elsewhere.

He maintained that despite these destructive activities, the Syrian regime is “regaining its political status”. He denounced US strategy in Syria as a “counteroffensive to Islamic Awakening revolutions in the region” [e.g. in countries like Egypt and Tunisia; but this is bizarre; the US backs Tunisia and Egypt, and it is Iran that is supporting counter-revolution in Syria -JC.]

He outlined the “two fronts” he believed involved in the country’s struggles. On the one side was “the Islamic Revolution and the Resistance front” [i.e. the al-Assad dictatorship], and the other side being “Global Hegemony” [i.e. the US and its allies].

“Our role from an operational perspective in Syria has four levels. First of all, on a strategic level, we support the Syrian government, nation and army politically and psychologically. As advisors, we transfer our war experiences to top commanders in the Syrian army. Actually, we are helping them modernise and rebuild the structure of the Syrian army . . .”

“On a strategic level, the Syrian army needs supplementary defence, that is the participation of the people on the ground, i.e. popular mobilization. Thanks to our valuable experience in this field…we implemented this concept in a structural way in Syria’s defence system.”

“When it comes to the operational level, we are helping brigade commanders for example…People who engage in physical confrontation with the enemies on the field…This is why a number of our commanders are there and are helping in planning and devising operational strategies in order to gain victory over the enemies.”

[He said Iran was also acting at a tactical level and a technical level (i.e. logistics, supply, etc.)]

The interviewer then asked about increasing Iranian casualties in Syria:

“When we see that the Syrian system is at the frontline of the fight against takfiri [extremist] terrorism…naturally, we cannot leave them alone. Because if did, we would have to fight in other places, which would be detrimental to us and to other Islamic nations.”

Salami: “There was a need for increased training… The new popular forces that joined needed new training. The Syrian army was busy on the field and could not provide training. They needed help for that…Therefore, our presence increased, in terms of quantity and even quality . . . However, in order to provide good advice, our men naturally need to visit the field…We need to get to know the realities of the field. Our philosophy is that our judgement cannot be accurate until we see the field from close-by.” He said that the number of “martyrs is not so high” even if it is greater than in the past.

He said that owing to Hizbullah and Iranian support, the Syrian government is building a new army with forces from Iraq, Afghanistan, Lebanon and Pakistan

Salami: “Air power will have an impact. The vast ground operations of the Syrian army which in certain cases are conducted alongside the Russian air force on the northern front…they are resulting in tactical developments and valuable operations. God willing, in the next few days, these tactical operations on the field will result in a strategic change, just like we were able to shift the balance on the ground until now.

‘He said that the Syrian army is “acting powerfully even in place where the Russian air force is not present” because of the “rejuvenation of the army, popular forces and of great motivation.” ‘

He said that the Russians had come into Syria because otherwise they would have to fight the extremists at home.

He said Iraq was just as important to Iran as Syria, but that Iran was letting the Iraqi armed forces determine the pace there.

He said, “Iraq and Syria are now the points of confrontation between regional and international powers”. . .

Asked about the IRGC’s capabilities against potential threats, Salami said that Iran needed a “strong and reliable guarantee of its defence and deterrent power against enemies on an international level . . . We cannot stand up to world powers with slogans and feelings. We need to turn these feelings, wishes and ideals into an effective reality on the ground.”

Meanwhile, in an interview with the Mehr News Agency, Iran’s speaker of Parliament, Ali Larijani, on Monday attacked Saudi Arabia’s activities in the Middle East, accusing it of “angry behavior” and “failed” policies, according to BBC monitoring:

Likewise the Saudi war on Yemen “failed to bring puppets to the power, but it has wreaked havoc on Yemen’s infrastructure and [development] plans. . .”

Accusing Riyadh of not being “progressive” he said, “A country cannot have influence merely by spending money . . . The Saudis should take lessons from the past and not create rift among Muslims, so the non-Muslims and Zionists do not benefit…”