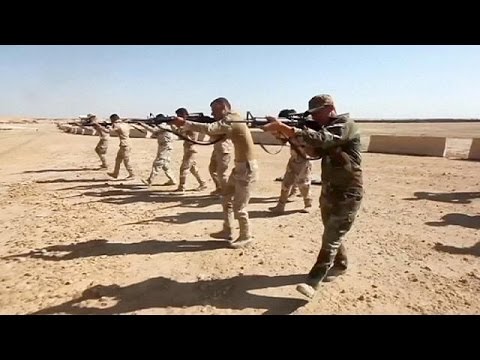 The White House’s announcement on Friday that the US will keep “less than 50” special ops troops at an HQ of the Kurdish YPG in northeast Syria for the purposes of training and strategic counseling raised concerns in some quarters that Russia might inadvertently bomb US troops.

Map of airstrikes on Syria since 30 Sept. Russia bombing a lot but not ISIS, US/Coalition hardly present. pic.twitter.com/kl4o7BLbJc

So that’s not likely to happen, since the US troops will be deep in Syrian Kurdish territory in the northeast of the country. That is upper right in purple on the above map embedded from Twitter. The US hopes to convince the leftist Kurdish militia, the YPG, which is allied with a smaller force of anti-fundmentalist Sunni Arab tribesmen, to take on ISIL directly and expel it from its capital, Raqqa, and indeed from Syria entirely.

The Kurdish northeast is one theater of the Syrian civil war, where the Kurds and their Arab allies have been directly fighting Daesh (ISIS, ISIL). The US was attracted by their success, even if they are post-Marxists.

Russia is mainly fighting in a wholly different theater, in the northwest, above Hama and east of Latakia. One of its goals is to take back that part of Idlib Province that has fallen to the Army of Conquest, in which at least two al-Qaeda-linked guerrilla groups play a big role.

If you imposed Syria on a US map, you could say that Obama and the Kurds are fighting ISIL in Maine, and Russia is giving air support to the Baath army against al-Qaeda and allied groups in Oregon. (Admittedly, Syria is geographically small compared to the US, and is probably only about 300 miles wide, so Oregon and Maine are ten times closer to one another).

Russia also supports the leftist Kurds against ISIL, so in that theater Moscow is on the same page with Washington.

The conflict these US actions generate is with Turkey, a NATO ally of the US which lies just north of Syria. Turkey is deeply afraid of the Syrian Kurds’ YPG militia, which Ankara sees as a branch of the radical PKK (Kurdistan Workers Party) guerrilla group with which the Turkish government has been fighting since the 1970s, considering it a separatist terrorist group.

The Syrian Kurds’ YPG has been so effective against ISIL that US Secretary of Defense Ash Carter is clearly in love with them and wants to support them with a couple of special ops platoons and better air support.

But on Friday, Turkish Prime Minister Ahmet Davutoglu said that Turkey had bombed the Kurdish YPG fighters twice. He said that they had tried to move west of Kobane in a quest to unite the three Kurdish enclaves of northern Syria along the Turkish border, which, Davutoglu said, would not be allowed.

It is possible that the public announcement that US troops would embed with the YPG was in part intended to warn Turkey against further bombing of latter.

What is really odd is that the US intends to use Incirlik Air Force Base in Turkey to support the YPG and its Arab allies in their fight against Daesh in Raqqa. How did Washington get Ankara to agree to that?

The US troops will be substantially east of Kobane, but in any case the only external power involved in Syria that might inadvertently bomb US troops is Turkey, not Russia.

Euronews: ” First US special forces to de deployed in Syria”