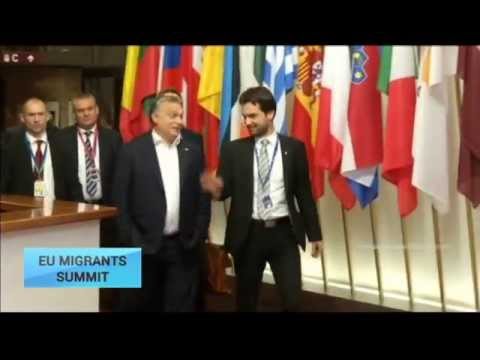 Hungarian Prime Minister Viktor Orban not only continued to defend his anti-immigrant bigotry but went on to say that Islam has never been part of Europe.

Mr. Orban not only is increasing the misery of largely Muslim refugees, but now he has erased 1300 years of European culture and politics, committing a sort of cliocide or mass killing of history.

The European “continent” is a little bit of an invented construct, but in any case it has been powerfully shaped by peoples who “came to us,” as Orban said of the Muslims. The Indo-European speaking peoples appear to have begun coming in from Syria and Turkey around 9,000 years ago. Hungarian as a language is probably Siberian from beyond the Urals, and its older forms show heavy Persian and Turkic influences. People in what is now Hungary did not speak Hungarian until well after people in southern Spain were speaking Arabic. Orban is clinging to a European nativism that has less historical grounding than that of European Arabs.

There isn’t a good way to exclude Spain or the Balkans from Europe. No history of either region could omit a heavy Muslim heritage. While it is true that Islam “came into” these areas from elsewhere, how is that different from everything else in Europe?

So too did the (Indo-European) Spanish language and the Slavic languages come into Europe from elsewhere. So too did Christianity, which invaded from the Middle East and was rejected until Constantine (and by many long after that). The indigenous European language in Spain was Basque. The indigenous religion was the worship of earth deities like Mari and Sugaar. The Celts perhaps brought a form of Druidism. Later on, many Spanish coastal cities such as Barcelona were founded by Phoenicians from Lebanon and they worshiped Baal. Christianity was a minor affair until after 313 AD / CE, and it is by no means clear that a majority of Spaniards were Christian in 711 when the Muslims began taking over the Iberian Peninsula. Only from 1492 was Islam largely liquidated in Spain, though large numbers of secret Muslims continued to live in Andalusia for perhaps centuries thereafter.

So Christianity had maybe a 400-year lead on Islam in western Europe, and Europeans belonged to neither of them in the heyday of the Roman Empire, the supposed crucible of classical Europe.

Sicily was an Arab Muslim Emirate 831–1072, with profound impacts on southern Italy. They remained a majority on the island until the mid-1200s.

The Ottoman Empire and Islam were central to the history of the Balkans and eastern Europe from the 1200s forward. While it is often thought that the Ottomans only had the Balkans, at some points their sway was much wider than that.

The Ottomans did not simply preside over much of eastern Europe. People converted to Islam, largely voluntarily, or immigrated from Anatolia. European communities such as the Bosnians and Albanians have been Muslim for centuries. Maybe their Islam is a few centuries younger than the Christianity of Hungarians, but both religions came to that region from the Middle East long after the fall of the Roman Empire.

Muslim technology and culture had an impact. In the medieval period, Avicenna (Ibn Sina) and Averroes (Ibn Rushd) had an enormous influence on the Catholic scholastic thinkers. Avicenna’s medical work, the Qanun or Canon, was still taught at Leipzig in the early 1700s. The Muslim observatory at Maragheh in Iran produced astronomical observations that influenced Copernicus.

Ottoman policy deeply influenced the history and culture of eastern Europe, including that of Orban himself. The Ottomans favored Protestantism and especially Calvinism, playing an important role in protecting them in Hungary and Transylvania. That’s right. The 11.6% of Hungarians who today say they are Calvinists, including Orban himself, are there in some important part because Sultans like Suleyman the Magnificent and Selim II gave their ancestors a refuge in their dominions. Had Hungary been ruled by Catholics then, Protestantism would have likely been virtually wiped out, as it was in Catholic Spain, or, indeed, in the thin strip of Catholic Austrian-ruled western Hungary itself.

That’s right, Viktor Orban’s religious heritage was shaped and made possible by the relatively tolerant Muslim policy in Ottoman Hungary.

French jurist and thinker Jean Bodin (1530–1596) wrote of rulers like Suleyman the Magnificent:

“The great emperor of the Turks does with as great devotion as any prince in the world honour and observe the religion by him received from his ancestors, and yet detests he not the strange religions of others; but on the contrary permits every man to live according to his conscience: yes, and that more is, near unto his palace at Pera, suffers four diverse religions viz. that of the Jews, that of the Christians, that of the Grecians, and that of the Mahometans [Muslims].”

In other words, Bodin’s characterization of the Muslim Ottoman rulers who then were Hungary’s monarchs shows them to have been far superior to today’s Orban, who does not even seem to know that his ancestors benefited from living under their scepter.