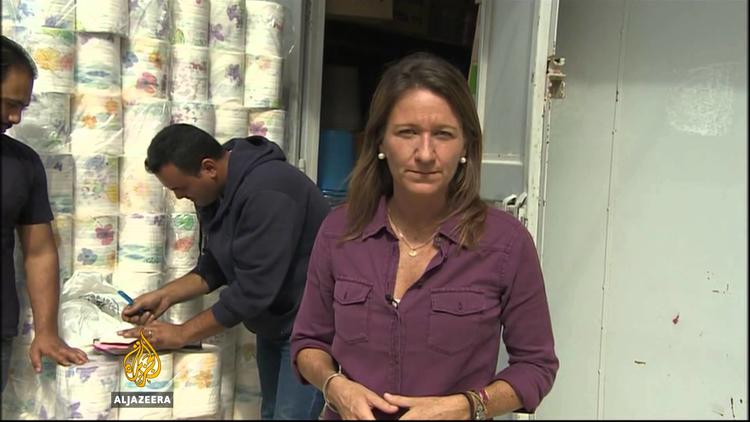 There are varying explanations for the uptick in violence in Israel-Palestine over the past few days, but one explanation that appears to have caught on with the Israeli government and much Western media, according to Duke University cultural anthropologist Rebecca Stein, is incitement through social media. As she notes, the word occupation is nowhere to be found in this new narrative.

I had a series of conversations with Stein over the past few days about this as well as her research into Israeli “digital militarism” and how it applies to the current conflict. Here are excerpts from our discussions held by phone and via email.

“What we are seeing here is a combination of the radical Islam and the Internet. Osama Bin Laden meets Mark Zuckerberg. The incitement in the social networks is moving the murders.” – Israeli PM Benjamin Netanyahu, speaking to his Likud faction on October 19.”

QUESTION: Many have pointed the finger at social media as a locus of the incitement. Is social media indeed to blame?

Stein: The narrative is facile and deeply misleading. To understand the root causes of the current violence one has to consider the effects of 48 years of military occupation and the increasing desperation of the Palestinian population — desperation that stems from both discontent with Palestinian leadership after two decades of a failed Oslo process and the desperation born of living under decades of repressive military rule.

In Israel today, there’s a wholesale failure to address these structural conditions – that is, save the work of activists on the besieged left. Both Israeli government officials and media pundits point to “incitement” as the root of the current violence – a charge led by Netanyahu and directed both at Abbas (Palestinian president) and Palestinian social media. In his last two addresses to the Knesset, he used the word incitement some 14 times. The word “occupation,” however, was not mentioned. Last week, the occupation was also missing from most Western media accounts of the current tensions. This was quite a remarkable disappearing act, though that may now be changing.

STEIN: There’s no doubt that Palestinian social media has become more militarized, and to a remarkable degree. But, as many Palestinian commentators have noted, we should not confuse the instrument with the cause. The same mistake was made in the immediate aftermath of the 2011 Arab revolts, when many spoke of a “Facebook revolution.” Similar explanations are being offered today. Some journalists are calling the Palestinian violence a “Facebook intifada” or a “Smartphone intifada.”

The media ecology of this Intifada is, without a doubt, unprecedented. As we know, this is a moment when most Israelis and increasing numbers of Palestinians are equipped with smartphone cameras. The amateur videos of the violence of the last week – both the Palestinian stabbings of Israelis and killings of Palestinians by Israeli security services — are going viral on Israeli and Palestinian social networks. Often, the same incident was filmed by multiple cameras and can be seen on Facebook from many different angles. Israeli commentators on the left are speaking of the emerging phenomenon of the political “snuff film” – films that Israelis are now routinely consuming and that are becoming integrated into the everyday fabric of Israeli social media culture.

The contrast with the first and second Intifada is striking, as many commentators have noted. There was really only one example of viral footage from the first uprising, and that was the 1987 beating of Palestinians by Israeli security forces. This grainy and silent footage, shot by professional CBS cameramen at a distance and only available for screening on television news, was considered the most impactful moving image of the first uprising. Indeed, this footage was credited with generating some of the sharpest international condemnation of Israel during the course of the uprising – video so damning as to have become the focus of debate in the Israeli parliament in weeks hence. The contrast with the current moment – in which virality has become the basic grammar of the media sphere, and is virtually required to mark an event as significant – could not be sharper.

QUESTION: You’ve noted that the language of occupation is missing from most Israeli accounts of the latest violence, whether on social or traditional media. Is this a new phenomenon?

STEIN: In Israeli mainstream media, and in popular Israeli imaginations, the occupation has been invisible for quite some time. Over the course of the last two decades, the Israeli public has increasingly turned their eyes away from the occupation, refusing to contend with it. Sometimes, this takes the form of an outright denial that military occupation persists. Today, for example, most Israelis will simply deny that Gaza is still occupied. Most Israelis also refuse to acknowledge the scale of Palestinian suffering in the occupied territories. Even images of Palestinian victims of Israeli military or settler violence are becoming less frequent on the evening news or the national daily newspapers. And when they appear in the media, they are often regarded suspiciously, as if their very appearance is the result of Palestinian political maneuvering. Some Israeli journalists even take issue with the very words “occupation” or “settlement” as they are considered misnomers.

In our recent book, Digital Militarism: Israel’s Occupation in the Social Media Age (with Adi Kuntsman, Stanford University Press, 2015) Adi Kuntsman and I describe this phenomenon as the operation of a kind of ‘public secret.’ The term refers to a social agreement, however implicit, to un-know that which you already know: namely, that the Israeli occupation is alive and well. As we write in our book, this public secret is a kind of social contract that works to contain the effects of Israeli state violence.

QUESTION: We’ve seen how the language of “incitement” has been used as an explainer for the recent killings by the Palestinians in Israeli social media and in the Israeli press. But isn’t there also “incitement” in Israeli social media for violent action? Over the weekend an innocent Eritrean migrant — mistaken for an attacker by Israeli security and shot — was physically attacked by Israeli bystanders. Israeli Prime Minister Netanyahu did, though, condemn the attack by the bystanders, offering condolences to the migrant’s family and telling members of the Likud Party that Israel is a “law abiding” country, adding, “No one should take the law into their own hands.”

STEIN: Amidst the pervasive narrative of Palestinian incitement on social media, there’s very little media attention to the massive growth in right-wing extremism on Israeli social networks. This phenomenon has grown quite markedly since the Gaza incursion of 2014, and more so the last two weeks, when we’ve seen a massive increase in anti-Arab sentiment on Israeli social networks. The Israeli left is also the object of popular vitriol. Those Israeli activists or concerned citizens who criticize Israeli policy, or remind the public about the structural violence of occupation, are also attacked – both on and off-line.

The Israeli state has also been an active player on social media in this period, including recent efforts to link Palestinian attacks to ISIS violence.

As I’ve discussed elsewhere, the Israeli state prides itself on its social media literacy and its ability to speak the vernacular language of the digital street.

One of the pillars of Israeli right-wing discourse on social media is the charge that Palestinians lie about Israeli violence. We saw this narrative at work in the aftermath of last week’s stabbing attacks by two Palestinian youths. One of the assailants was killed by the Israeli security services and one was injured. Abbas was roundly attacked by Israeli politicians following his erroneous statements that both youth had been killed. In fact, the younger of the two was being treated for his injuries in an Israeli hospital. Whether the claim was a deliberate falsehood or merely an error, we just don’t know. But what followed was a very familiar Israeli chorus: ‘here they go again, lying again about Israeli violence.’ In Israeli political and media discourse, this is a very old claim – rooted in the notion of what some Israeli pundits call ‘Pallywood.” (ie, the Palestinian Hollywood).

‘Pallywood’ is the notion that Palestinians routinely perform victimization for the camera and that most of the images of Israeli military violence are actually Palestinian fabrications of some kind. The narrative was initially developed to manage the killing of Mohammed Al Dura in 2000. In the subsequent two decades, the claim proliferated – used to counteract precisely the proliferation of Palestinian-generated images of violence wrought by the Israeli security services; images made possible by smartphone cameras and social media. In this age of viral death, the Pallywood charge is considered a particularly important political weapon for those on the Israeli extreme right.

STEIN: All players in the occupation context right now understand the political importance of social media. And all are actively employing social media as part of their political toolkits — from the Israeli military to the Jewish settler population, from Palestinian human rights workers to Palestinian militants. The language of a Facebook or Smartphone Intifada is not only erroneous but outdated, as it presumes we should be surprised by the presence of social media in the political theater. But, in fact, this is the new normal.

For Israelis, the viral and real-time violence of the current moment seems to make the killing more intimate and bring it closer to home. But herein lies the paradox of the current moment where Israelis are concerned. Even as new digital technologies make the violence more proximate and immediate, and even as it seems as if everything can be seen – and from multiple angles — the military occupation is increasingly receding from Israeli view.

Stein is the Nicholas J. & Theresa M. Leonardy Associate Professor of Anthropology at Duke University. She is the author of Itineraries in Conflict: Israelis, Palestinians, and the Political Lives of Tourism (Duke, 2008); and the co-editor of Palestine, Israel, and the Politics of Popular Culture (Duke, 2005) and The Struggle for Sovereignty: Palestine and Israel, 1993-2005 (Stanford, 2006). Digital Militarism: Israel’s Occupation in the Social Media Age (Stanford, 2015), co-authored with Adi Kuntsman, is her latest book. She is also core faculty with the Duke Islamic Studies Center. Stein is currently continuing her research on the ways that new communication technologies are meditating the everyday Israeli relationship to its military occupation,with a focus on the role of new photographic technologies and viral image networks within this political context.

AJ+: “Beating of Palestinian by Israeli soldiers caught on video”