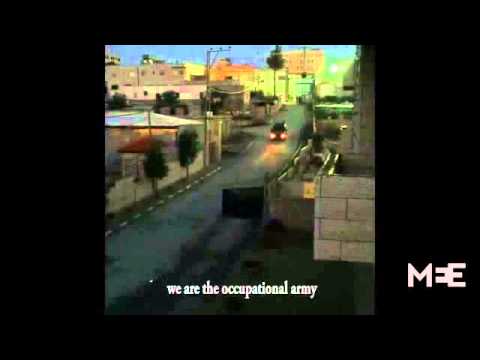 On October 29, Israeli military forces issued a disturbing message to residents of Aida refugee camp in Bethlehem, telling them that unless they stopped throwing stones “we will gas you until you die.”

Israeli military forces raided the camp and fired tear gas and flash grenades indiscriminately at people’s windows, balconies, and down the narrow streets, allegedly in response to Palestinian youths throwing stones at the Israeli separation wall that borders the community.

During the raid, an Israeli soldier in a military vehicle addressed theprotestersand residents of the camp through a loudspeaker in Arabic. The disturbingincidentwas caught on film.

“Inhabitants of Aida, we are the Israeli occupation forces, if you throw stones we will hit you with gas until you die. The children, the youth, and the old people, all of you – we won’t spare any of you”.

During the assault of theprotesters,Qassan Abu Aker, 25, was arrested. The speakerphone announcement continued, “We have arrested one of you, he’s with us now. We took him from his home, and we will kill him while you’re watching as long as you throw stones.”

The chilling message concluded: “We will blind your eyes with gas until you die, your homes, your families, brothers, sons, everyone”.

The use of force was so extreme that children from Aida’s two communitycentersand residents of nearby houses had to be evacuated to another part of the camp, and at least one youth was taken to hospital with respiratory problems.

The clashes are part of a spate of violence that has unfolded across Israel and the occupied Palestinian territory over the past month, in which at least 64 Palestinians and 9 Israelis have been killed.

Alongside the disconcerting language used to inspire terroramongthe residents — the majority of whom weren’t involved in the stone throwing — the film provides evidence of a member of the Israeli army admitting to the potentially lethal application of tear gas.

Last week, on Oct. 21, Hashem al-Azzeh, 54, died in Hebron due to excessive tear gas inhalation used by Israeli forces to subdueprotesters, and two days earlier an elderly woman in the Batan el-Hawa area of Silwan, East Jerusalem, died from the effects of tear gas fired during clashes.

“In this statement, we see — among a range of potential criminal offences — a public threat to kill Palestinian civilians, and to execute a prisoner,”Simon Reynolds, Legal Advocacy Coordinator at the BADIL Resource Center for Palestinian Residency and Refugee Rights, told Ma’an.

“Though such threats are appalling, they are not necessarily surprising. In light of the mounting civilian death toll among Palestinians, such threats merely add words to the deed.

“What we are seeing is an apparent policy of lawlessness in which Israeli forces can wield deadly force with virtual impunity. Especially troubling is that this is a policy that seems to have, at the very minimum, the tacit acceptance of the highest levels of government.”

“Indiscriminate or deliberate firing on observers and demonstrators who pose no imminent threat violates the international standards that bind Israeli security forces,”Kenneth Roth, executive director of Humans Rights Watch said on Oct. 11, after a HRW research assistant was shot and injured whileobservinga demonstration near Ramallah.

“There is mounting evidence that, as tensions have risen dramatically, in some cases Israeli forces appear to have ripped up the rulebook and resorted to extreme and unlawful measures,”Philip Luther, Director of the Middle East and North Africa Programme at Amnesty International said.

“Intentional lethal force should only be used when absolutely necessary to protect life,” he added. “Instead we are increasingly seeing Israeli forces recklessly flouting international standards by shooting to kill in situations where it is completely unjustified.”

In February last year, Amnesty released a report entitled ‘Trigger-happy’, which found that Israeli forces display a “callous disregard” for human life, with near total impunity for the killing of Palestinian civilians in cases examined since 2011.

Megan Hanna is a freelance photographer and journalist based in Palestine.