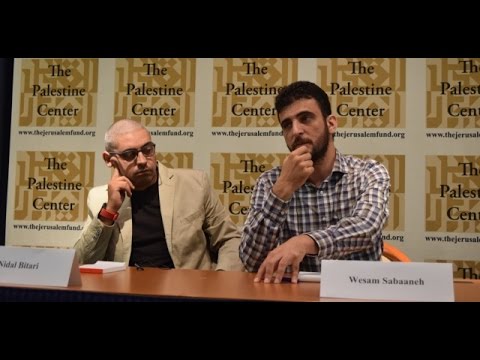 Similarly to their Syrian counterparts, Palestinians in Syria have been severely affected by the ongoing war. Syrian towns and villages, as well as Palestinian refugee camps, have been subject to repeated attacks and prolonged sieges by troops loyal to the Assad regime and by Syrian rebels.

Palestinian refugee camps, such as Ein el Tal, Dera‘a, al-Husseyniyeh, Sbeineh, Khan El Sheih, and Yarmouk, have suffered significant shelling, destruction, and the massive displacement of their populations as a result of the ongoing conflict. Khan al-Shieh, a Palestinian refugee camp located in the Western Ghouta area of Damascus, experienced massive shelling and destruction and has been cut off from Damascus by a government-imposed siege since June 2015.

Yarmouk is in the third year of a siege that, according to Amnesty International, “has been particularly prolonged, has had the harshest impact [on civilians], and has caused the largest number of deaths from starvation.” And yet, at the end of July 2015, the office of the UN Secretary General made the surprising decision to remove Yarmouk from the list of besieged areas in Syria, based on the advice of the UN Organization for the Coordination of Humanitarian Affairs (UNOCHA), which argued that humanitarian aid had reached Yarmouk civilians who had crossed into the surrounding areas of Yalda, Babilla, and Beit Sahem. This decision is puzzling, to say the least, given that the situation on the ground is consistent with UNOCHA’s own definition of a besieged place.

Indeed, no aid has been allowed into Yarmouk for months, and the United Nations Relief and Works Agency for Palestine Refugees (UNRWA) has not been able to distribute food aid to Yalda, Babilla and Beit Saham since access to the area was suspended on June 8, although it has recently been able to provide some health services. Regular interruptions in water and food supplies continue to affect Yarmouk, Yalda, Babilla and Beit Saham; and while movement between Yalda and Yarmouk is possible, going from one area to the other remains a dangerous undertaking and individuals attempting to cross between the two areas do so at the whim of the government forces and other armed groups operating in the area. It must also be noted that Yarmouk’s surrounding rebel-held areas are themselves encircled by Syrian regime troops, preventing Palestinians from Yarmouk from moving beyond those areas.

The known Palestinian casualties include 2,663 killed since the beginning of the war in Syria, while 753 Palestinians are being detained and 300 were missing as of February 2015. The majority of detainees are in Syrian government prisons, but others were arrested by armed groups fighting the Assad regime. More than 50 percent of Syria’s pre-war Palestinian population are internally displaced and at least 15 percent have fled across Syria’s borders. The majority of Palestinian refugees who fled Syria are in neighboring Middle Eastern countries. As will be discussed below, many of them do not have a legal status and are denied basic social services. They also have restricted freedom of movement and live in constant fear of arrest and forced return to Syria.

In January 2013, the Jordanian government announced a non-entry policy for Palestinian refugees. Since then, those Palestinians who had been able to cross into Jordan (usually relying on forged documents or smugglers) have lived in fear of being arrested and deported back to Syria. Furthermore, Palestinians who fled to Jordan cannot legally live in the refugee camps established for Syrians, but at the same time, cannot legally work to earn money to rent housing outside of camps. The one exception is Cyber City, which is more of a detention center than a refugee camp, and where Jordanian authorities have been transferring Palestinians who are in the country clandestinely since April 2012. Palestinians are confined to Cyber City unless they decide to return to Syria.

In Egypt, the government does not allow Palestinian refugees to register with the office of the United Nations High Commissioner for Refugees (UNHCR). At the same time, Egypt falls outside of the area of operation of the UNRWA. Consequently, there is currently no UN agency responsible for the protection and assistance of Palestinian refugees in Egypt. Additionally, it has become all but impossible for Palestinians from Syria to get visas to Egypt. Because Palestinians (unlike other refugees in Egypt) cannot register with UNHCR, they cannot get residency permits, receive food vouchers, medical assistance, or any other services provided by UNHCR. Palestinians can currently apply for a one-month visa to travel to Egypt, but they also need to get clearance from Egyptian security services, a clearance that is rarely granted. Palestinians fleeing Syria for Egypt have been subjected to arbitrary arrest, prolonged detention or deportation to a third country, and collective expulsion by Egyptian authorities.

The Turkish government’s behavior toward refugees on its soil is reportedly characterized by an open door policy; by the principle of non-refoulement (no forced return to the country of origin); and by unlimited duration of stay in Turkey. However, the Turkish commitment to implementation of this policy is undermined by reports of Turkish border guards pushing back or shooting refugees from Syria trying to cross the Turkish border, and of Palestinian refugees being assaulted by border guards while attempting to cross into Turkey.

The situation of Palestinians from Syria who are already inside Turkey is also far from ideal: Because Turkey is not part of UNRWA’s area of operations, Palestinians in Turkey do not have access to the agency’s assistance. Normally, these Palestinians would fall under UNHCR’s mandate. However, UNHCR services, which are distributed through the Turkish government, are not reaching Palestinian refugees, whose legal status in Turkey remains unclear. Part of the problem is that the Turkish government does not allow UNHCR to perform refugee status determination on its soil.

Given the harsh realities affecting Palestinian refugees in Syria and in neighboring countries, an increasing number are opting to continue on to Europe. Since it is impossible for Palestinians to get a visa to Europe from one of the Middle Eastern host countries, their only option is to go to Europe clandestinely. These clandestine journeys sometimes require those who take them to sacrifice their life savings and are filled with uncertainty and danger: The danger of being abandoned by smugglers before reaching their destination; of being cheated out of their money by smugglers without making it to Europe; of being shot at, arrested or detained by the authorities at points of departure; of being arrested, detained and even tortured along the way or upon arrival by European authorities; or of drowning during the crossing of the Mediterranean.

A Separate and Unequal Legal Status

Palestinian refugees maintain a separate legal status from other categories of refugees. This separate status is enforced through an exclusion clause in article 1(D) of the 1951 UN Convention Relating to the Status of Refugees that states that the convention does not apply to persons who are already being assisted by another UN organ or agency. At the time of the signing of the 1951 convention, Palestinian refugees were already receiving services from UNRWA and the UN Conciliation Commission for Palestine and were thus excluded from UNHCR’s mandate. However, if interpreted correctly, article 1 (D) also means that Palestinians who are located outside of UNRWA’s normal areas of operation or who are unable to access UNRWA assistance immediately fall under the mandate of UNHCR.

It is worth recalling that the exclusion of Palestinian refugees from UNHCR’s mandate was pushed by Arab states, who feared that absorbing Palestinians with other categories of refugees would harm the right of return as a primary solution for Palestinians who were expelled or fled from their homes in 1948. However, as has been noted in Badil’s publication Al-Majdal, this exclusion has also contributed to the “construction of a separate and unique category of ‘Palestine’ refugees and therewith created an environment in which discriminatory policies can flourish”. Indeed, it is clear from the examples above that Palestinians fleeing the conflict have seen their mobility and access to international protection curtailed in part because of their Palestinian identity and separate legal status.

He ended his explanation by saying that “Our Palestinian Brothers have the right to return to their country of origin. They should stay in Syria until the end of the crisis”. Similarly, the Lebanese government has generally justified its denial of basic rights (such as the right to work or to own property) to Palestinians on its soil as a form of support for the Palestinian right of return that is predicated on the non-integration of Palestinians into Lebanese society. The current hardships faced by Palestinians from Syria who are in Lebanon or those trying to reach Lebanon cannot be divorced from Lebanon’s pre-existing policies toward Palestinians on its soil.

Even with their exclusion from the 1951 Convention, Palestinian refugees are entitled to the protection of other legal instruments. Uniform and consistent application of the Protocol relating to the Treatment of Palestinians in Arab States, adopted at Casablanca on 11 September 1965 by Arab countries would alleviate some of the obstacles and hardships that Palestinians from Syria are facing in the neighboring countries to which they fled.

Furthermore, the duty to protect refugees is enshrined in a broader human rights framework that includes instruments such as the Convention Against Torture and other Cruel, Inhuman, or Degrading Punishment, the Convention on the Rights of the Child, and the International Covenant on Civil and Political Rights. It is also worth noting that the principle of non-refoulement is considered a rule of customary international law. As such it is binding on all States, regardless of their accession to the 1951 Convention.
Even when new host countries for Palestinian refugees from Syria are not signatories to the 1951 Convention, or have reservations about applying the Convention to Palestinians, the rights of Palestinian refugees, particularly non-refoulement, should be implemented under international human rights law.

Policy recommendations for protecting Palestinian refugees in Syria as well as the overview of this piece were omitted for brevity. The full report can be viewed on Al-Shabaka’s website.

Mai Abu Moghli, Nael Bitarie, and Nell Gabiam authored this policy brief for Al-Shabaka, an independent non-profit organization whose mission is to educate and foster public debate on Palestinian human rights and self-determination within the framework of international law.

The Jerusalem Fund and Palestine Center: “The Palestinians in Syria before and after the Syrian Crisis”