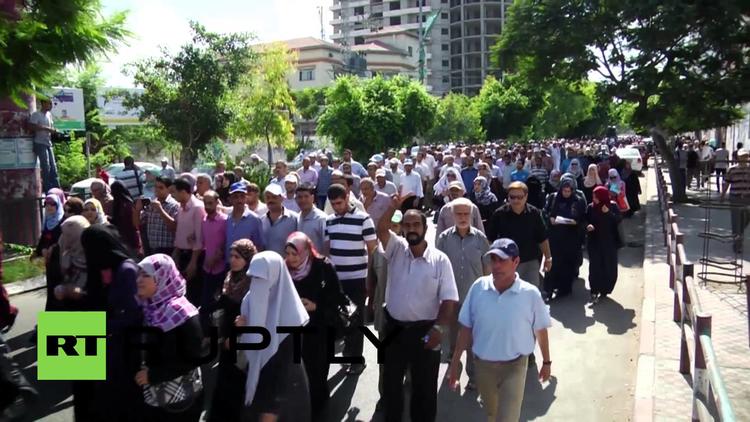 GAZA (Ma’an) — Around 70 percent of workers in Gaza live in poverty, the director of the Gaza General Federation of Trade Unions, Sami al-Amsi, said on Thursday.

Al-Amsi, at a press conference, warned that Gaza would face a “catastrophe” that will effect the majority of the coastal enclave’s population if the government does not form a clear plan to ease their suffering.

Al-Amsi said the Gaza Strip is suffering from the “worst economic crisis in decades,” and called for the opening of border crossings, while stressing the importance of the reconstruction process, which would decrease unemployment by providing jobs to thousands.

He called on the Palestinian unity government to take responsibility for the Gaza Strip, noting that since its formation last year, temporary employment programs have been canceled and workers have only been provided “unfulfilled promises.”

In May, the International Monetary Fund (IMF) reported thatreconstruction since Israel’s 2014 Gaza offensive has been significantly lower than expected, while the World Bank reported that the strip was facing a “dangerous fiscal crisis.”

Over 2,200 Palestinians were killed in the offensive, which caused severe damage to housing and infrastructure.

Unemployment in Gaza increased in 2014 “to reach 44 percent — probably the highest in the world,” the World Bank reported.

“Gaza’s unemployment and poverty figures are very troubling and the economic outlook is worrying,” the World Bank quoted Palestinian territories director Steen Lau Jorgensen as saying in a statement.

The UN has repeatedly warned of further conflict in the area if the reconstruction process continues at such slow pace, emphasizing that Gaza’s humanitarian crisis is worsened by Israel’s continued blockade on the strip.

Israel severely limits the amount of building materials allowed into Gaza as part of its blockade, which is supported in the south by Egypt.

Critics of the blockade have called for it to be fully lifted to allow reconstruction, warning that an ongoing humanitarian crisis could fuel further conflict.

Ruptly from last month: State of Palestine: 13,000 UNRWA workers march through Gaza while on strike