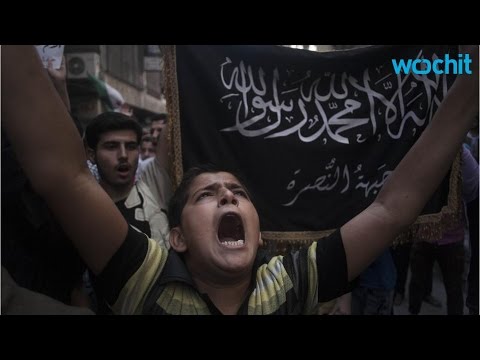 Both the [so-called] Islamic State (IS) group and Al-Qaeda’s Syrian affiliate, the Al-Nusra Front, this week called for attacks against Russia, as Russian air strikes in Syria continue — though not against IS targets.

IS broke two weeks of silence on the Russian air strikes in Syria on October 13 with an audio message calling for “jihad” against both Russia and the United States.

The 40-minute long speech by IS spokesman Abu Mohammed al-Adnani calls on “Islamic youth everywhere” to “ignite jihad” — holy war — against “the Russians and the Americans.”

“Russia will be defeated,” Adnani said.

Adnani’s message appears to be the first official announcement from IS that refers to Russia since the Russian air campaign began on September 30.

Even IS’s de facto official Russian-language propaganda outlet, Furat Media, has kept quiet about the Russian air campaign, although individual Russian-speaking IS militants have spoken out on social media, mostly to warn Russia against a “second Afghanistan.”

Indeed, since the Russian strikes began, IS has made advances against Syrian rebels in northern Aleppo Province. On October 14, IS continued to battle the Liwa Suqour al-Jabal rebel group — which has been bombed by Russian jets — in rural northern Aleppo and around the towns of Ahras and Tel Jabin.

IS gains in northern Aleppo could help the group threaten or cut off rebel supply lines leading into the city, a fear that comes amid reports that the Syrian Army, Hezbollah, and Iranian forces are preparing for a ground offensive against rebels in the Aleppo area.

Russian-language social-media accounts linked to the Al-Nusra Front have criticized IS for attacking rebel groups at the same time that Russia is raiding them.

“When the Americans bombed IS, Nusra did not attack and defended itself from IS, and now IS is using the Russian strikes against Muslims to attack the mujahedin,” the JMA Sham account run by North Caucasian Nusra militants, wrote on Facebook on October 11. (The account has since been deleted for violating Facebook’s terms of service.)

So why did IS make its call for “jihad” against Russia at all, and why now?

Is is no coincidence that Adnani made his threats against Russia a day after his rival, leader of the Al-Nusra Front Abu Mohammad al-Jolani, called on militants in Russia’s restive North Caucasus to attack Russian civilians and soldiers in response to Moscow’s air strikes.

There has not been an attack in Moscow since January 2011, when a suicide bomber killed 37 people in the Domodedovo International Airport’s international arrivals terminal.

But Russian authorities said on October 12 they had foiled a major terrorist attack in the capital, with the Federal Security Service (FSB) claiming that some of those involved — all Russian citizens — had “been through combat training in IS camps in Syria.”

The Russian media reported on October 13 that a Moscow court had remanded three suspects — Mokhmad Mezhidov, Elman Ashaev, and Aslan Baysultanov — in custody until December.

The ultimate goal of the planned attacks was to make the Russian government “end the participation of its armed forces in operations against IS in Syria,” the investigators were quoted as saying.

The reports also said the suspected organizer of the attack was a militant from Kabardino-Balkaria whom police have sought for over a decade — suggesting that this individual is unlikely to have been in Syria. Such a militant would presumably have been on an FSB wanted list, meaning that if he had fought or trained in Syria, he would have found it extremely difficult to return to Russia without alerting the FSB.

One of the three suspects, Baysultanov, had also been in Syria before plotting the attack, according to the FSB.

However, the FSB did not say that Baysultanov had fought alongside IS in Syria.