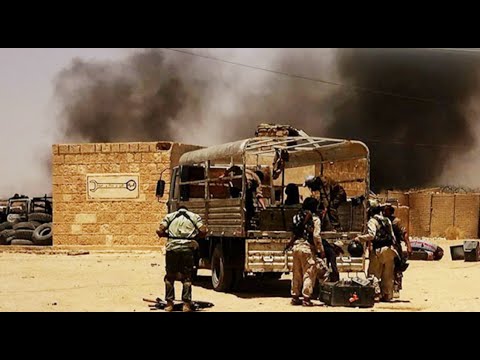 Iraqi Prime Minister Haydar al-Abadi is alleged to be under “enormous pressure” from Shiite militiamen and hardliners to seek Russian airstrikes on Daesh (ISIS, ISIL) targets. On Oct. 1, he had announced that such Russian intervention in his country would be welcome.

On Wednesday, the largest bloc in parliament, the Shiite Da’wa Party from which al-Abadi springs, sent a letter to the Prime Minister asking for Russian intervention.

He has established a joint intelligence center in Baghdad where reports are shared among Iraq, Iran, Russia and Syria.

But this week the new chairman of the Joint Chiefs of Staff, Marine Gen. Joseph Dunford, visited Iraq and said he got assurances from PM al-Abadi that Russia would not fly missions against Daesh on Iraqi soil.

He said that there had been “angst” in the Pentagon when al-Abadi mentioned this possibility.

The United States, he said, “can’t have a relationship right now with Russia in the context of Iraq.” Dunford told the reporters accompanying him to Iraq, “I said it would make it very difficult for us to be able to provide the kind of support that you need if the Russians were here conducting operations as well. We can’t conduct operations if the Russians were operating in Iraq right now.”

Since many countries are flying missions against Daesh in Iraq, including Britain, France, Australia, Jordan, Morocco, Belgium, Denmark and the Netherlands, it is a little hard to understand why Russia could not also do so without fear of friendly fire. Is the US in Iraq unwilling to share with Moscow the “identify friend or foe” codes that would keep Russian planes safe from such an attack?

In any case, the Iraqi press and parliament think that Gen. Dunford is being far too categorical in the way he describes Baghdad’s pledge. The Shiite militias, such as the Badr Corps and Asa’ib Ahl al-Haqq, intend to go on lobbying for Russian intervention. And, Parliament will take up the matter later this month.

My guess is that the Obama administration hasn’t wanted to roll back Daesh quite yet, precisely because it would be the Badr Corps and similar hard line pro-Iran Shiite militias that would conduct the attack on Mosul. And that configuration would enrage the Sunni Iraqis further. The US is reaching out to Sunni tribal chieftains and wants to delay the taking of Mosul until there are enough such Sunnis and they can be positioned as the leading edge of the attack.

In contrast, the Shiite militias want to go, now.

The US desire to keep Russia out is likely in part a declaration of an old 19th-century style “Sphere of Influence.” Spheres of influence are exclusive. It was one such sphere that drew Britain into WW I. London proclaimed that Belgium was in its sphere of influence. When the German army invaded France through Belgium, that brought Britain into the war. But why?

And this anecdote suggests why the US may be unwise to try to claim Iraq as a sphere of influence in this way.