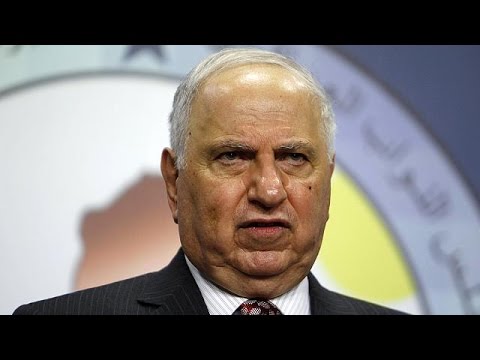 Clarence Darrow, the great trial lawyer and orator, said, “I’ve never killed anyone, but I frequently get satisfaction reading the obituary notices.”

I don’t get any satisfaction from this obituary. In the first Star Wars film (later retitled Episode IV), the Death Star destroys the entire planet of Alderaan, and Obi Wan Kenobi says, “I felt a great disturbance in the Force, as if millions of voices suddenly cried out in terror, and were suddenly silenced. I fear something terrible has happened.” That is how I feel about the Iraq War and what happened to Iraq. I guess that makes Chalabi a minion of Grand Moff Tarkin. But it is the deaths of the hundreds of thousands that I mourn.

It is, however, an occasion to reflect on what Chalabi did, to see if we can learn from it.

This was a man who gave Judith Miller of the New York Times loads of false information about Iraq’s alleged nuclear weapons program (it did not exist and Chalabi knew it didn’t). She ruined her career by acting as his stenographer. He just made a lot of shit up in order to provoke a US invasion. But, in 2002-3 the Times under Bill Keller was perfectly willing to be used as a tool to get up this war, and its poorly sourced and poorly fact-checked front page sensationalism fanned the flames. It alleged that Iraq had bought centrifuges from India that could be used for nuclear enrichment. Dr. Mohammed Elbaradei, the then head of the International Atomic Energy Agency, looked at the specifications of those centrifuges and concluded that they were way too fragile of that purpose. They were part of some Baath official’s money-laundering and never had anything to do with anything nuclear. If Elbaradei could conclude that almost immediately, the Times could have asked an engineer. Instead, they appear to have asked people like Chalabi.

In 2002-2003 I was all over the NPR affiliates warning the public that Saddam Hussein was not connected to al-Qaeda and that there was no good evidence for his having unconventional weapons or even programs, and that anyway mustard gas is not a weapon of mass destruction. About the building war, I quoted Han Solo from Star Wars (when they were trapped in the trash compactor): “I have a bad feeling about this.”

Chalabi was from an old and fairly well known Shiite merchant family (they had been Sunnis, as the name– it is Ottoman– indicates, but converted, like a lot of Iraqis, in the mid-19th century). His immediate family was close to the British-installed monarchy and had to flee a popular revolution in 1958 that made Iraq a Republic. He grew up an expatriate. He seems to have felt that the old elite actually owned Iraq and he wanted it back.

The hawks in the US Congress voted the Iraqi National Congress, which he headed in London, tens of millions of dollars a year to overthrow the Iraqi government in the 1990s. The State Department and the CIA were opposed. They could never get any receipts from him or information about how he spent the money. His Gucci revolution” or attempt to take on Saddam Hussein from Kurdistan in 1995 with a few hundred Kurdish and Shiite rebels was easily crushed and resulted in the deaths of 100 good men. He had been in the field impeccably tailored.

Although Chalabi’s false propaganda was very useful to George W. Bush, Dick Cheney, Paul Wolfowitz, Douglas Feith, John Bolton and other warmongers, Chalabi was a minor player in the US invasion, occupation and destruction of Iraq as a functioning country. He helped, but his help was eagerly sought and welcomed. It was the Bush-Cheney White House that launched the aggressive war. They had other secret agents and whack jobs feeding them false information, which they lapped up. They downed the steaming crocks he served up and asked for more.

Chalabi was a banker whose banks in Beirut and Jordan had a habit of suddenly going under. He was investigated by the Jordanian and Swiss governments on charges of embezzling $30 million, and Jordan convicted him. Nevertheless, the Neoconservative coterie in the US, who came to power in 2001, wanted to trust him with a whole oil state.

I was told by an eyewitness that the first US viceroy in Iraq, Jay Garner, was impatient with the speechifying by politicians after the fall of Saddam. After one conference he said, “I don’t know why we had to go through all that rigamarole– we’re just going to put Chalabi in in six months anyway.” Apparently the first Rumsfeld/ Neocon plan was to make Chalabi a Karzai figure, sort of an American puppet with a facade of having been voted in by locals. What exactly he promised the Neoconservatives in return for this anointment has never been revealed.

Chalabi came back to Iraq with the US military. He was asked, after his lies had become apparent, whether he had any regrets. “No!” he said. “We are in Baghdad.”

I was told that Colin Powell found out about the Neocon plot and managed to thwart it by sending in Paul “Jerry” Bremer, one of whose charges was to marginalize Chalabi.

Chalabi was a force behind the “Debaathification Commission,” which fired some 100,000 Sunni Iraqis in places like Mosul and Ramadi from their jobs and militated against a continuing public role for them. He was also among the Shiite politicians who coerced Viceroy Bremer into abolishing the Iraqi army, on the grounds that it was full of Baathists– threatening to withdraw their support from the weak American “Coalition Provisional Authority” if he did not comply. Chalabi and his hard line Shiite colleagues moved their own people into the jobs from which the Sunnis were fired. As late as 2010 they were disqualifying Sunni members of parliament from politics.

In short, Chalabi’s Shiite sectarianism and vindictiveness toward Sunni former Baathists contributed mightily to the creation of the Sunni backlash that led to ISIL and the break-up (as we speak) of Iraq.

He allied with Shiite militia leader Muqtada al-Sadr, not because he was particularly pious, but as a matter of convenience.

Chalabi once ran for parliament but couldn’t get the 40,000 votes needed to be seated. He was not popular and could never have headed the country. He was, however, a slick operator and managed to get appointed to important position (heading Iraq’s energy commission e.g.). Charges of graft dogged him.

Ironically, I think he profoundly loved Iraq. I don’t begrudge him his hatred for the Saddam Hussein regime, which in spring of 1991 committed a virtual genocide against the Shiites, and had earlier, in 1988, killed 5,000 Kurdish civilians with sarin gas. But the war he helped manufacture had no UN Security Council authorization and was illegal and aggressive. Moreover, far from the South African model of reconciliation, he pursued vicious revenge. The war he helped get up did not leave his beloved Iraq intact or healthy. It left 4,491 US troops dead, along with hundreds more contractors (many of them ex-military), and 10,000 gravely wounded (30,000 wounded badly enough to go to hospital). How many Iraqis died is controversial. I doubt it is less than 500,000 if you count all excess deaths, including from breakdowns in water purification & etc.

Chalabi was an accessory to one of the great crimes of the twenty-first century, the launching of an aggressive war with no casus belli and the ruination through incompetence and sectarianism of a great country.

Persons full of overweening ambition and dedicated to the pursuit of narrow self-interest can often destroy the very prize that they so eagerly sought, crushing it to death in a satanic embrace.