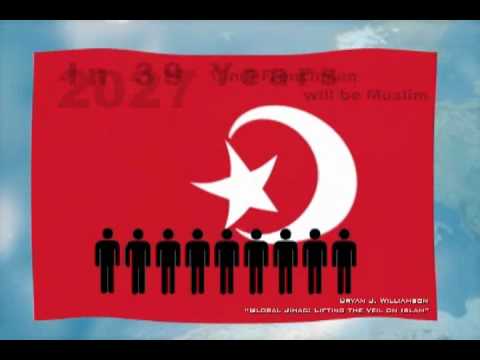 In the wake of the Syrian refugee crisis, which has forced more than four million people to flee that country’s civil war, fears over the geopolitical fallout have gripped some quarters of the American public. Amid intense conversations about how to deal with the throngs of stranded people seeking shelter and safety in the West, right-wing bloggers have used the occasion as an opportunity to warn about a “flood” of Muslims that would inundate the United States. Casting the European experience as one of “invasion,” they suggest that refugees arriving to America’s shores would find in their tragedy an opportunity to establish the equivalent of “Eurabia.”

American Thinker, a daily online magazine that features right-of-center commentary on a variety of political issues, took aim at the Obama administration’s 2016 Syrian refugee resettlement increase, arguing in September of 2015 that allowing more Syrian refugees would lead to a significant uptick in the number of ISIS supporters in the United States. In an article the following month, one writer listed thirteen reasons that refugees should not be admitted. Among them were accusations of support for terrorism, “inbreeding,” the spread of “disease,” and reliance on public handouts.

“President Obama wants to flood this country with ‘Syrian refugees,’ the writer put it. “As most AT [American Thinker] readers know, we should not admit a single one.”

From the blogosphere to the mainstream

That type of rhetoric has become common on anti-Muslim blogs and websites, and demonstrates the degree to which flashpoints in the Middle East, as well as domestic politics, serve as springboards for advancing fear of Islam and Muslims.

At World Net Daily, blogger Pamela Geller wrote that the photograph of three-year-old Syrian Aylan Kurdi, whose body washed ashore on a Turkish beach after a failed attempt to reach Greece, was “emotional manipulation” designed to divert attention away from an “invasion” of Syrians into Europe. In another post, she called for an end to the resettlement program in the United States, linking it directly to incidences of violence.

“Obama has been importing hundreds of thousands of Muslims under the Refugee Resettlement Program. Despite the spike in jihad plots and attacks in the U.S. and the genocide of non-Muslims under Shariah, Obama remains unmoved,” she wrote.

In the Conservative Review, David Horowitz penned a piece titled “Are we Walking in the Footsteps of Eurabia?” In it, he said: “As we ominously watch the developments across the pond, every American must ask: is this the sort of lifestyle we want to bring to our country?”

But this type of rhetoric also finds a home on television networks and in the mouths of presidential candidates. Appearing on “Hannity” on Fox News, Donald Trump said that the immigration of Syrians to the United States would be like a “Trojan horse.”

“This could be one of the great military coups of all time if they send them to our country — young, strong people — and they turn out to be ISIS. Now, probably that won’t happen. But some of them definitely, in my opinion, will be ISIS,” Trump said.

Other bloggers, media commentators, and politicians in both the U.S. and Europe have sown fears an “ISIS invasion,” or argued that terrorists are posing as refugees to enter Western countries and wreak havoc.

Not a “wave,” hardly a trickle

Despite warnings about a “flood” of Syrian refugees to the United States, the hard data shows a less frightful picture.

The New York Times reported last month that, to date, the United States has accepted only a small fraction of the four million Syrian refugees, taking in 1,854 since the conflict began four years ago. With an average of 14 people per location, they’ve settled in some 130 cities and towns across the country, making up just two percent of the 70,000 refugees admitted to the U.S. last year, the three largest groups of which came from Myanmar, Iraq, and Somalia.

In 2016, the Obama administration plans to resettle just 10,000 Syrian refugees in the United States. That number pales in comparison to the 92,000 admitted by Germany this year and represents a minute fraction of a percent of the total U.S. population.

As for concerns of refugee violence, the evidence is scarce. “The refugees themselves, fleeing war and extremism, are not strong supporters of the most violent groups: if they were, they would have stayed in Iraq or Syria,” writes Georgetown University professor Daniel Byman.

Speaking to the Los Angeles Times, King’s College professor Reinoud Leenders echos this view: “They are running away from violence, they do not engage in armed activities; that’s the very reason why they leave.”

Both Byman and Leenders also note that other than occasionally calling on Muslims in the West to attack local targets, ISIS typically encourages its followers to come to Iraq and Syria to fight local enemies, but doesn’t actively send them out to other places. “The Islamic State might call for attacks in the West,” Byman says, “but it has focused its own money, fighters, and suicide bombers on defeating its enemies in the Middle East.”

Fears of terrorist sleeper cells among refugee groups in Europe and the U.S. completely ignore the reason for Syrians’ exodus (violence) and misunderstand the goals of a group like ISIS.

The blanketed association of Syrians and ISIS members also overlooks the simple reality that Muslims in Syria and Iraq comprise the majority of ISIS’s victims, and today, lead efforts to root out the group. Beyond that, there is little empirical evidence that indicates that Syrian refugees to Europe or the United States have engaged in violence upon their arrival. Even Frontex, the group that manages EU borders and has previously warned that militants could be infiltrating boats headed for Europe, acknowledges that there is no hard evidence to support those claims.

Ironically, it is the Syrian refugees themselves that have been subjected to attacks in their new communities in Europe. Upon their arrival in Europe, refugees were met with force from law enforcement (and even journalists). Last week, German police reported three separate assaults on Syrian asylum seekers. Two of the attacks involved gangs of more than 20 assailants wielding baseball bats. Earlier in October, a German refugee center housing migrants was set ablaze in a crime that mirrored an earlier suspected arson in August at a planned shelter in Nauen, a town near Berlin.

Maintaining “our” way of life

As journalist Doug Saunders points to in his aptly titled book, The Myth of the Muslim Tide, these bouts of paranoia over the supposedly nefarious influence of Muslim immigration — whether forced or voluntary — are products of the false belief that the world is divided into fixed and irreconcilable civilizations. Those who promote and buy into this rhetoric about Syrian refugees seem less concerned about the practicality of particular policies, but rather want to maintain an environment that keeps “us” away from “them.”

This reaction was manifested in a recent protest in Idaho, where a militia group called the Three Percenters was rallying against bringing in Syrian refugees. When the group’s spokesman shouted through the bullhorn, “Now, refugees coming from Islamic hotbeds of terrorism, don’t you think that poses a threat to Idaho communities?” those gathered responded “YEAH!!!”

This fear mongering about the Muslim immigrant “other” is nothing new. For years, commentators on both sides of the Atlantic have warned of the transformation of Western societies into “Eurabia” and “Islamerica.” Videos with sinister music decry what they see as threats posed by increasing “Muslim demographics.”

But these claims don’t square with the facts, and they only fuel fervent reactions — like the one in Idaho — that betray American values. As Saunders writes, “the larger threat comes not from these immigrants [in this case refugees] themselves, but from our response to them.”

Via The Bridge Initiative
—-