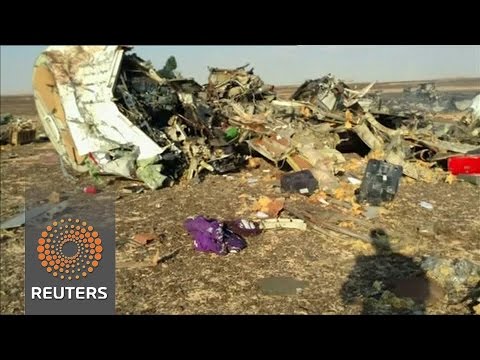 A [so-called] Islamic State [group] (IS) affiliate in Egypt’s Sinai Peninsula has claimed that it downed a Russian charter plane that crashed in a mountainous area of the Sinai Peninsula on October 31.

The Airbus A321 — carrying 214 Russian and three Ukrainian passengers, and seven crew — lost contact with air-traffic control 23 minutes after it took off from the Sharm al-Sheikh resort in the Red Sea.

The Russian Embassy in Egypt said in a Facebook post that all the passengers and crew on board the flight had died.

The IS affiliate, Wilayat Sinai, made its claim of responsibility for the crash via social media, including Twitter and Telegram.

“The fighters of the Islamic State were able to down a Russian plane over Sinai province that was carrying over 220 Russian crusaders. They were all killed, thanks be to God,” its statement read.

IS supporters on Twitter quickly began spreading the claim under two Arabic hashtags: “Russian plane” and “Islamic State has downed a Russian plane.”

The statement did not indicate how the militants allegedly downed the plane, although some IS supporters on Twitter claimed that IS’s Sinai affiliate possessed Igla surface-to-air missiles. Israeli officials have also claimed that Wilayat Sinai has released footage showing its militants apparently firing an Igla (SA-18) weapon.

Russian Transport Minister Maksim Sokolov said the claim that IS was involved in the crash of the Airbus A321 was “not credible.”

“Various media outlets have put out mixed information saying that the Russian passenger liner flying from Sharm El-Sheikh to St. Petersburg was reportedly shot down by antiaircraft missiles fired by terrorists,” Sokolov said. “This information cannot be considered credible.”

Sokolov added that Egyptian experts working at the crash site had not uncovered information “that would confirm these allegations.”

Since then, the group has carried out a number of attacks against security forces in the Sinai, including a large-scale and complex ground assault against as many as 21 Egyptian military and police positions near the town of Sheikh Zuweid on July 1.

The group claimed it used a variety of heavy and light weapons, including guided missiles and air defense weapons.

Israel intelligence estimates that Wilayat Sinai has between 500 and 1,000 members. The group has released videos showing its militants firing man-portable air-defense systems (MANPADS).