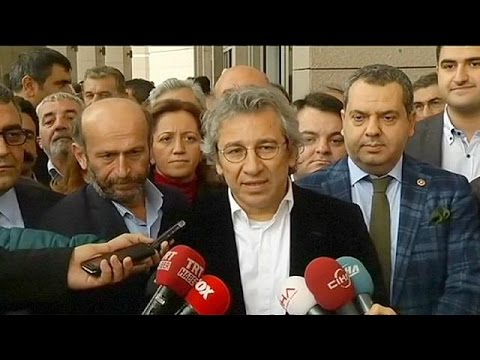 Turkey has jailed two very prominent journalists for publishing video last May of a January, 2014, Turkish intelligence convoy of weapons to Syrian militants. When I say prominent, I mean prominent. They are Can Dundar, editor-in-chief of the Cumhuriyet newspaper, and Ankara bureau chief Erdem Gul. Cumhuriyet (“Republic”) was founded in 1924 and is center-left in its orientation. So this would be like the FBI carting off Dean Baquet of the New York Times for reporting on CIA shipments of T.O.W. missiles to Salafi rebels in Syria. The journalists are charged with espionage and belonging (!) to a terrorist organization– charges fantastic on the face of it.

Meanwhile, the Syrian army is charging that Turkey has vastly increased arms shipments to rebels in Syria since last week’s shootdown of a Russian fighter jet, and is receiving smuggled gasoline and antiquities in payment.

The Turkish government has now also arrested several senior generals who, acting on a tip, were the ones who in January 2014 ordered the search of trucks allegedly carrying arms to rebels in Syria– on which Cumhuriyet reported. Huriryet writes: “Istanbul Deputy Chief Prosecutor İrfan Fidan interrogated Ankara Gendarmerie Regional Commander Maj. Gen. İbrahim Aydın, Brig. Gen. Hamza Celepoğlu and Ret. Col. Burhanettin Cihangiroğlu on Nov. 28 and sent them to court appealing for their arrest on Nov. 29.”

“On Jan. 19, 2014, a convoy of trucks on their way to cross into Syira was stopped by gendarmerie forces upon suspicion that they were carrying military material to rebel groups fighting against the Bashar al-Assad regime. The incident turned into a big news story when the gendarmerie forces detained the intelligence officers and confiscated the trucks.

President Erdogan, who was prime minister at the time, reacted harshly over the case, accusing sympathizers of US-based Islamic scholar Fethullah Gulen in the judiciary and the security forces of undermining the government. He said the Gulen movement was responsible for the halting of the trucks, as well as the Dec. 17-25, 2013 corruption cases that he claimed had tried to bring down the government . . .

The government says the case of the halted trucks is evidence of the Gulenists’ “anti-national” behaviour, as it claims that the trucks were carrying assistance to Turkmens fighting in Syria against both al-Assad and the Islamic State of Iraq and the Levant (ISIL). When Dundar and Erdem published their story as fresh evidence in the case, despite courts ruling to restrict media coverage of the incident upon the government’s request, they made President Erdogan furious. Prosecutors soon opened cases against them.”

So this case has to do with the 2013-2014 campaign of the secretive religious-Right Gulen faction within the Turkish government to bring then-PM Tayyip Erdogan (now president) into disrepute. Gulenists had made damning recordings and collected documents when they were still partners with Erdogan and a constituent group inside the Justice and Development Party (AKP). Erdogan weathered the charges against him in the eyes of the public, and his party just won enough seats to rule without seeking a coalition with any other party.

That Turkey and the Gulf oil states have been supporting hard line fundamentalist Salafi groups in Syria such as the Army of Conquest (an al-Qaeda-led coalition) is an open secret. That Daesh (ISIL, ISIS) has been smuggling gasoline and kerosene from the refineries it captured, in part to Turkey, is another open secret.

So why is the AKP government waging a war on the press and its own generals to cover up this activity?

My guess is that Erdogan is having prosecutors send a signal to journalists and military men that acting on or revealing further Gulenist leaks will not be permitted. Perhaps he fears that the Gulen movement has more dirt on him than it has already brought out and just wants to forestall its becoming public. He may also be attempting to put all activities of the MiT (the Turkish CIA) out of bounds for the press and the Turkish military.

But the focus on that January, 2014, military shipment is also suspicious. Erdogan claimed that it was humanitarian aid going to the Syrian Turkmen in the north of Syria. But the inspection of the gendarmerie and the video released by Cumhuriyet demonstrate that the trucks were carrying weaponry. Cumhuriyet reported that the cargo comprised a thousand mortar shells, 50,000 bullets for machine guns and 30,000 heavy artillery shells. — Is the problem that it wasn’t going to Turkmen at all but to some group so radical that Erdogan would be embarrassed if it were known he was supplying it?

While Turkey is roiled by a war on journalists (the editor-in-chief of the conservative Muslim newspaper Zaman, which allegedly has ties to the Gulen movement, has just also been arrested, for insulting Erdogan), the arms flowing through the country are allowing the Salafi fighters to withstand the Russia air campaign south and east of Aleppo.

In a headache for President Obama, his Syrian Democratic Forces (a coalition of Kurdish, Sunni Arab and Christian militias) have been kicked out of some villages south of Aleppo by another set of American clients, the Falcons of the Mountain (Suqur al-Jabal), who are hard line religionists and hate the Kurds as secular leftists allied with christians. Al-Qaeda in Syria is also taking territory in the Aleppo area, opportunistically benefiting from Russian and regime attacks on Daesh there.

Turkey supports the Turkmen and the Army of Conquest despite the membership of al-Qaeda in the latter, against the Kurdish YPG. Russia is said to be helping the Kurds.