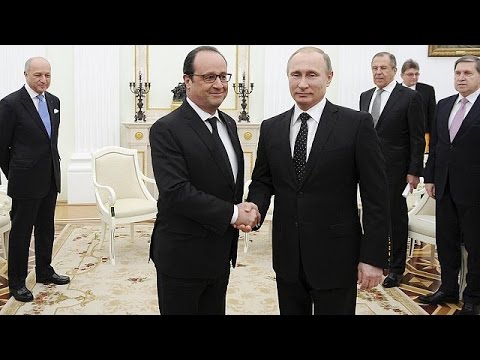 French President Francois Hollande met Thursday with his Russian counterpart Vladimir Putin in Moscow, in his marathon search for a “Grand and Unique Coalition” against Daesh (ISIL, ISIS) in Syria. One of the sticking points between France and the US on the one side and Russia on the other is the fate of Syrian president Bashar al-Assad and his Baath regime.

At the same time, French Foreign Minister Laurent Fabius gave an RTL radio interview Thursday in which he said that in order to fight Daesh,

“There are two series of measures: aerial bombardment . . . and ground troops, which cannot be our own, but rather must be the forces of the Free Syrian Army (opposition), the Sunni Arab forces, and –whiy not?– the forces of the regime.”

This position is 180 degrees from the one France had adopted in 2011 and held to until the 11/13 Paris terrorist attacks by Daesh.

‘In declaring before Congress that the struggle against IS [Daesh] is now the priority for French action, the chief of state backed away from the position of Paris that had considered, until now, that no campaign against the jihadists could be conceived unless there was a clear vision of removing Bashar al-Assad. “French movement on this issue has consisted of revising its priorities so as not to have them pose an obstacle to rapprochement with Russia,” observes Camille Grand, director of the Foundation for Strategic Researdh.’

If so, Fabius went way farther toward mollifying Putin than did Hollande, who continued to insist that al-Assad has no future in Syria. Moreover, contrary to what Grand said above, France had done nothing against the radical vigilantes (“jihadists”) in Syria at all until September, but rather was sending in arms and money to help hard line Salafi groups overthrow the Baath government, likely in close coordination with Saudi Arabia and other Gulf allies.

That is, Fabius and to a lesser extent Hollande are revealing a 180 degree pivot away from prioritizing overthrowing al-Assad to prioritizing instead overthrowing Daesh in al-Raqqa province, their Syrian power base.

At the press conference in Moscow, Putin replied to Hollande’s overtures by agreeing that there should be a grand coalition against terrorism, but said he wanted it placed under the aegis of the United Nations. He said he was ready to cooperate with President Obama’s anti-Daesh coalition in Syria but that incidents such as the Turkish government’s shoot-down of a Russia fighter jet are “totally unacceptable.” He said that Russian participation would depend on that incident not being repeated, since, he remarked, Russia doesn’t really need to partner with anyone, whether with a state or a coalition.

Putin argued that the Syrian regime is the ideal partner to have in a fight against Daesh. Hollande could not agree.

Putin did say, however, that he could envisage cooperating with non-Daesh groups. Capital writes that he ended this way:

“With regard to the attacks in Paris and Saint-Denis on 13 November, as well as the destruction of a Russian Airbus over Sinai on 31 October, he [Putin] spoke of a “common tragedy.” “We are united in our will to find and punish those who committed [these attacks],” he said.

Le Monde cautions, however, that Hollande hasn’t really had much luck in forging his grand coalition. President Obama is suspicious of Russia’s strategy of shoring up al-Assad first, against al-Qaeda-led coalitions of rebels and against Free Syria Army units (supported by the CIA), before taking on Daesh in a serious way.