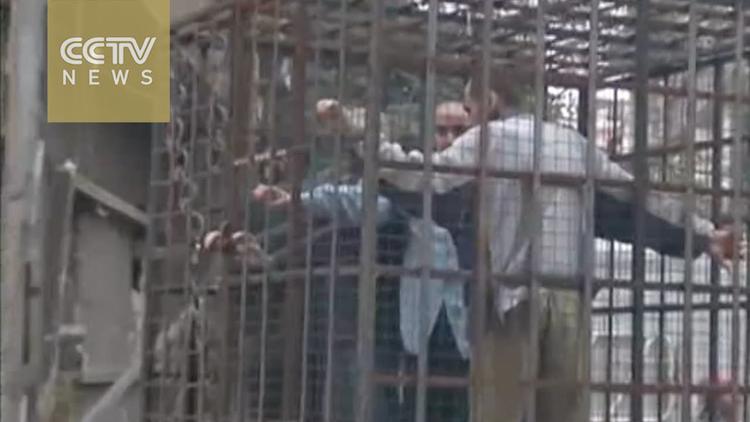 (New York) – Syrian armed groups are endangering civilians, including women, and detaining soldiers by placing them in metal cages throughout Eastern Ghouta. The armed groups say they are doing that to deter indiscriminate government attacks on the area.

The use of detained soldiers and civilians in this manner illegally puts them at grave risk of harm, Human Rights Watch said. The practice constitutes hostage-taking and an outrage against their personal dignity, which are both war crimes.

“Nothing can justify caging people and intentionally putting them in harm’s way, even if the purpose is to stop indiscriminate government attacks,” said Nadim Houry, deputy Middle East director. “Ending Syria’s downward spiral requires international backers of armed groups as well as the government to make protecting civilians a top priority.”

A video posted on November 1, 2015, by the Shaam News Network, a local opposition outlet, shows trucks transporting cages, each containing between four to eight men or women.

The accompanying text states, “Rebels in Ghouta have distributed 100 cages, with each cage containing approximately seven people and the plan is afoot to produce 1,000 cages to distribute in Eastern Ghouta … in different parts of Douma city particularly in public places and markets that have been attacked in the past by the regime and Russian air-force.” The footage includes interviews with a detained colonel and two Alawite women being held in metal cages.

The largest armed group in Eastern Ghoutta is Jaysh al-Islam, headed by Zahran Alloush. While the group has not claimed responsibility for this decision, the Syrian Observatory for Human Rights accused Jaysh al-Islam of responsibility for the action. In the course of fighting between armed groups and government forces in the nearby `Adra al-`Omalia in December 2013, Jabhat al-Nusra and Jaysh al-Islam abducted hundreds of civilians, mostly Alawites, according to the United Nations Commission of Inquiry on Syria. The hostages, many of them women and children, are being held in unidentified locations in Eastern Ghouta. The concern is that they are among those in these cages.

Syrian government forces have repeatedly attacked residential areas and popular markets in Eastern Ghouta, where an estimated 150,000 civilians still live. On October 30, government attacks on a marketplace in Douma, the largest town in Eastern Ghouta, killed at least 70 people and wounded 550, according to Doctors Without Borders (MSF). On August 16, government air attacks on Douma’s popular markets and residential areas killed at least 112 people, whom witnesses and first responders said were overwhelmingly civilian. The consequences of these attacks has been made worse by the siege government forces have imposed on Eastern Ghouta, limiting access to food, clean water, and medical care.

The Shaam video includes interviews with local residents who justify the use of the cages by arguing that this may deter further attacks. “Your women are our women,” a teenage boy standing near one of the cages is filmed as saying. “If you want to kill my mother, you will kill them too.”

On October 30, the day of the government attacks on Douma that killed a reported 70 people, key regional and international actors on Syria met in Vienna to discuss the conflict. They issued a nine-point statement agreeing on some issues but failing to agree on immediate measures to stop indiscriminate attacks.

In situations of armed conflict in which international humanitarian law applies, hostage-taking is considered a war crime. This is defined as detaining people, and then threatening them to compel a third party to carry out or abstain from specific acts as an explicit or implicit condition for the hostages’ release or safety.

“Human shielding” is also prohibited in international law. The Geneva Conventions and the statute of the International Criminal Court couch the prohibition against using human shields in terms of using the presence of civilians or other protected people, such as detained fighters, to make certain points, areas, or military forces immune from military operations. State practice establishes this rule as a norm of customary international law, applicable in both international and non-international armed conflicts.

This is the second reported instance in Syria of placing detainees in cages to use them to attempt to deter attacks. On September 13, a Facebook page used to spread local news from Fu`a and Kefraya, two Shia towns in Idlib besieged by Jaysh al-Fateh, a coalition of opposition armed groups including Ahrar al-Sham and Jabhat al-Nusra, posted images of a cage that they claimed contained detained Jaysh al-Fateh combatants that had been placed on top of a building in the besieged communities by fighters defending the towns. Their stated aim was reportedly to deter indiscriminate shelling by Jaysh al-Fateh.

“Syrians get no protection from mere statements at international conferences,” Houry said. “The path forward for international and regional players should include concrete measures to force the warring parties to release thousands of unlawfully detained people and to stop indiscriminate attacks.”