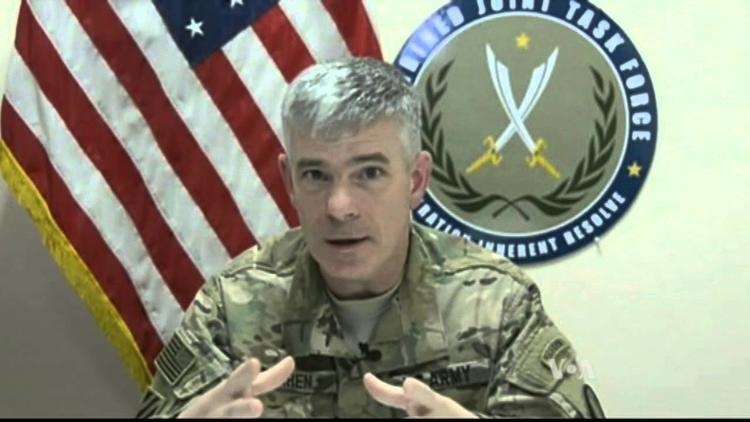 Iraqi fighters in Anbar are waiting to push the Islamic State group out of cities like Ramadi. But they wonder when it will happen, if ever. Many believe that politics are why this particular victory must take so long.

The tribal fighters of the central Iraqi province of Anbar are disappointed with the international coalition fighting the extremist group known as the Islamic State [group].

“The US planes could determine the fate of our city,” one of them, Qassim al-Ithawi, who is fighting in the Humera area south of the city of Ramadi, says. “They determined the battle of Sinjar by shelling Islamic State positions intensively and allowing the Iraqi Kurdish military to enter the city. This meant that Sinjar was liberated in just two days. US planes could help us just as quickly – but they don’t seem to have made that decision. We don’t understand why they are waiting to liberate our city,” adds al-Ithawi, who has not been paid but who says he will keep fighting using the gun his brother, murdered by the Islamic State, gave him, until the end.

It’s been almost two months since the battle to get Ramadi back from the [so-called] Islamic State, or IS, group began. The extremists control most of the province of Anbar and occupy six larger cities – Rawa, Heet, Al Qaem, Al Rutba and Anah – as well as 12 towns. The Iraqi government can only claim to control one larger city, Haditha, and three towns: Amiriyat Al Fallujah, Khan al-Baghdadi and Habbaniyah. If Ramadi – the capital of the province – can be freed, it could facilitate the liberation of other cities in Anbar.

The biggest problem facing Ramadi isn’t military, it is political: Who will run the city after the IS fighters are expelled?

“It should really just be a matter of a few days,” Faleh al-Issawi, deputy head of Anbar’s provincial council, told NIQASH. “Ramadi should be free soon because the Iraqi army has reached the centre of the city. However improvised explosive devices and car bombs are delaying further advances. And there are still some families left in Ramadi that the IS fighters are using as human shields.”

But one of the biggest problems facing Ramadi isn’t military, it is political: Who will run the city after the IS fighters are expelled? Who will manage security? Who can? And who will ensure there are no reprisals and prevent the kind of lawless chaos that happened after several other Iraqi cities were liberated recently?

Many locals, and plenty of tribal fighters too, believe that because there are no good answers to these questions, that efforts to free Ramadi of the IS group are being delayed.

One of the parties with a lot to lose if Ramadi ends up in an anarchic state is actually the US, which has hundreds of advisers and soldiers stationed in military bases near the city, at Habbaniyah, south of the city, and at the Ain al-Asad military base to the west.

Asked by email whether the US had fears about the future of Anbar, a US military adviser, who could not be identified because he was not authorized to talk on the subject, wrote back saying that, “yes, we have some concerns – because the tribes of Ramadi are divided and so are its politicians. The police force disintegrated after the fall of the city,” he continued, “and we are helping with this and training and arming a new police force. Additionally while the army is making headway in Ramadi, there are also a lot of [volunteer] Shiite Muslim militias nearby and residents are afraid they will enter Ramadi.”

In the recent past, the Shiite Muslim militias, composed mostly of volunteers, have been controversial; they’ve been accused of retaliatory acts, including murder, arson and kidnapping, against a Sunni Muslim population they believe allied itself with the IS group. Around 70 kilometres away from Ramadi there is a large number of Shiite Muslim militias fighting to liberate Anbar’s other large city, Fallujah.

The security crisis has split Anbar’s tribes in half. Many have already started fighting one another.

And the US military adviser is also right about the precarious nature of the relationships Anbar’s tribes currently have. Most of the province is split into tribal groups and the security crisis has seen them split roughly in half. Some support the Iraqi government and its efforts to remove the IS group. They have formed the so-called Anbar Tribal Council Against Terrorism. The other half of the province’s tribes have said they won’t take any sides in this fight. And of course, there are also a number of tribes who have pledged allegiance to the IS group, often in secret.

The fighting that has been going on in Anbar for months now – problems in this Sunni-Muslim-majority area started well before the IS group took over Mosul in June last year – have seen hundreds killed as tribes fight one another.

The lack of any rule of law means that some tribes fight and kill their enemies without opposition or observation. And there is reasonable concern that, should the IS group be expelled, there will be even more tribal fighting as the tribes allied with the government carry out reprisals on those who were not. Similar things happened in the province of Salahaddin after the IS group was forced out there, when local Sunni tribes allied with Shiite volunteer militias, took revenge, looting and burning homes of other Sunni tribes there, but pretending to be members of the Islamic State while doing so.

Over the past few days, officials at the US embassy in Baghdad have been holding a series of meetings with members of Anbar’s provincial council inside Baghdad’s Green Zone. The meetings have been focussed on how to support the tribal fighters in Anbar after the IS group is vanquished. According to Anbar’s governor, Suhaib al-Rawi, the last of these meetings took place on November 11.

Secret meetings are being held to try and warm up the relationship between Anbar’s tribes and the Iraqi government.

One of the goals of these meetings, brokered by US and European officials as well as local Arabs, is to find a way for the Iraqi government to form an alliance, or at least reach an understanding, with the tribes in Anbar who say they are neutral, refusing to support pro-government forces and refusing to swear allegiance to the IS group. These tribes – including the Albu Assaf, al-Jaber, al-Marri and al-Jumaili tribes – have formed a number of armed militias with the General Military Council for Iraqi Revolutionaries, the Mujahideen Army and the Brigades of the 20th-Revolution among them. And if they don’t somehow start agreeing with the Iraqi government, conflicts in Anbar could continue for years. Up until now though, insiders suggest that there have been no real breakthroughs at these closed door meetings.

It seems everyone is desperately casting around for solutions to Anbar’s various problems. One of the plans that should have worked was the formation of Iraq’s National Guard. This scheme, which was close to being agreed upon by the Iraqi government, would have seen different areas form their own security forces to look after their own affairs. So basically, in Sunni areas, Sunni officials would have been in charge of security, rather than having a Shiite-heavy military oversee them. Although potentially divisive, it was seen as a way to appease groups like Anbar’s tribes – who have no faith in the Iraqi government – and prevent them from joining the IS group, which preys upon Iraq’s social, political and cultural divisions. However after the Iraqi Cabinet approved the National Guard plan and submitted it to the Iraqi parliament, it was voted down by those who felt that a National Guard would empower their enemies too much.

The Iraqi government’s inability to pass that legislation and pull through on promises has seen relations between Anbar’s tribes and Baghdad cool. It has also seen Anbar’s tribes turning more to the US for support and, once again, there has been talk about reforming the Awakening movement in Anbar. The Awakening Movement was a home grown initiative dating back to 2006, which saw tribal groups with a Sunni Muslim background halting their fight against the US military and instead taking up arms against Sunni Muslim extremists, particularly Al Qaeda, in Iraq. They were also being paid by the US military.

And now, as provincial council member al-Issawi pointed out, there are thousands of tribal fighters waiting, who had volunteered for the National Guard and who were being trained to fight. They should get salaries and official recognition, he argues.

Still, as council member al-Issawi points out, there were 20,000 police men in Anbar before the IS group arrived; the new recruits number only a thousand.

Ahmed al-Shukaifi is a field commander in charge of hundreds in the Haditha area, west of Ramadi. He told NIQASH that often the tribal militias are fighting in a random, uncoordinated way and that they’ve decided to remedy this. “We agreed to form a united tribal leadership in coordination with the US forces,” al-Shukaifi explained to NIQASH. “We will also negotiate with the government about the security situation in Anbar. I think this is an excellent idea that allows the fighters to have a say in what’s going on.”

Iraqi Prime Minister Haider al-Abadi has joined in the effort by describing the tribal forces as members of the Popular Mobilisation Units too – this is the name given to the Shiite Muslim volunteer militias fighting the IS group. The one dud note here is that Rashid Falih, a Shiite Muslim general from southern Iraq, is also the overall head of these Sunni Muslim militias; Falih supervises operations in Anbar but is unpopular with Sunnis here because he was in charge when Ramadi fell to the IS group.