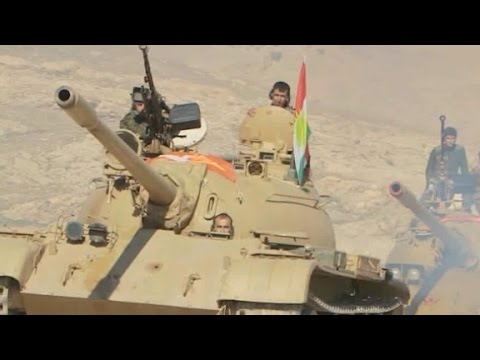 Al-Arabiya reports that the Security Council in Iraqi Kurdistan has announced that their paramilitary, the Peshmerga have taken 150 square kilometers of the city of Sinjar from Daesh (ISIL, ISIS) and has the entire city surrounded. Some sources say that 70% of the city has fallen to them.

The Peshmerga say that they have set up security checkpoints along the route that connects Daesh-dominated Mosul in north Iraq to the Daesh capita of Raqqa in Syria.

The US military announced that they had given the Peshmerga air support and had killed dozens of the Daesh extremists.

The Kurds said that they intended to take the city of Sinjar, which has a large Kurdish population, and establish a safety zone around it that would protect it from Daesh artillery fire.

On Wednesday night, some 7500 Peshmerga troops converged on Sinjar in a convoy along with Yazidi fighters from nearby Mt. Sinjar (liberated from Daesh rule by the Peshmerga last winter). The pan-Arab daily al-Hayat [“Life”] reports that a third force, Syrian Kurds of the far left YPG or People’s Protection Units also are taking part in the campaign. There is a dispute whether there is participation by Yazidi members of the PKK or Kurdistan Workers Party that is fighting an insurgency in Turkey. The Peshmerga commander denies this allegation. The US and Turkey consider the PKK to be a terrorist organization.

Al-Hayat also reveals that there have been clashes between the Peshmerga and the Turkmen militia at nearby Tuz Khurmato.

Altogether, some 20,000 Peshmerga troops are expected to participate in this campaign. The Iraqi army is sitting it out, a datum for which I have seen no explanation.

Daesh has some 600 fighters in the town of Sinjar, having brought reinforcements in the last few months as the Kurdish campaign was delayed for several months, in part by disagreements between the Peshmerga from the Kurdistan Regional Government and Yazidi fighters from Mt. Sinjar, as well as by poor visibility for the US Air force.

The campaign is being personally supervised by Massoud Barzani, the president of the KRG, who has been accused of having authoritarian tendencies (his term as president has actually ended but no new elections have been held.)

CNN: ” Kurdish forces fight to take back Sinjar from ISIS”