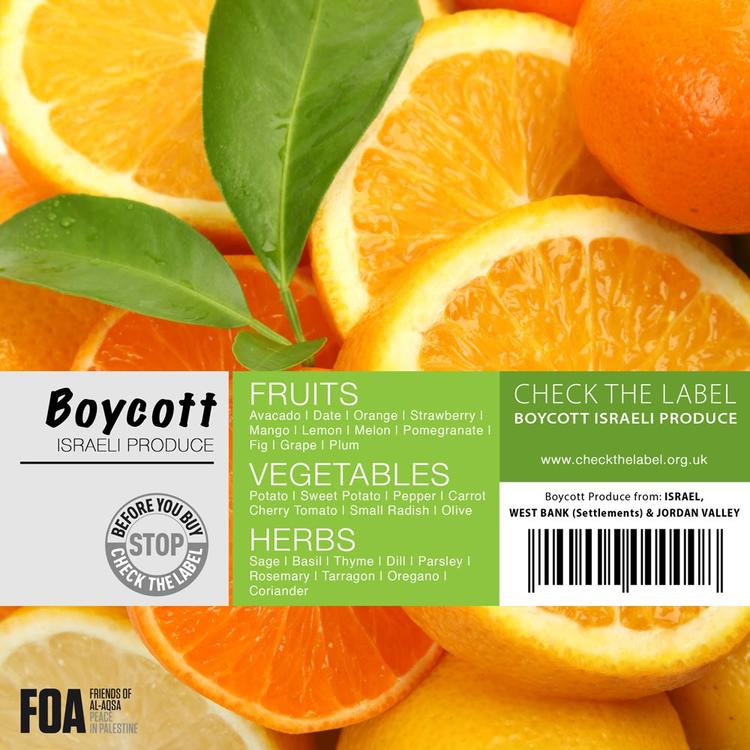 The European Union will probably issue a ruling today that goods produced in the Occupied Palestinian West Bank by Israeli squatters must be so labeled. Such labeling is already carried out in some European countries, but this ruling would extend the practice to all 28 EU members.

It is illegal in international law for an Occupying power to flood its own citizens into Occupied territory, so ipso facto what squatters produce is the fruit of a crime of expropriation and illegal in character.

The EU, however, will not declare the products to be illicit, it will simply indicate the point of origin and let consumers decide.

The initial economic impact of this move will be slight. According to the Yahoo article linked above, the squatter economy, based on stealing Palestinian land and resources and suppressing Palestinian economic activity, comes to $200 – $300 million a year, and about a third of it goes to the EU, i.e. $70 – $100 million a year. Europeans are likely to cut back such buying by 50% for a loss of up to $50 million. That seems minor given Israeli trade with Europe is $30 bn. a year. But it is actually a big deal.

First of all, a loss of 1/6 to 1/4 of trade would put a damper of squatter commerce.

But the principle the EU is establishing is more important. That is, there is a difference between commercial enterprises in Israel proper and those in the Occupied territories.

But many Israeli companies have a subsidiary in the West Bank. How do you separate out legitimate and illegitimate companies if this is true?

Sodastream got caught up in this conundrum when it had a factory in the West Bank (I think it has since gotten out).

I wrote last winter regarding the Sodastream controversy:

“The European Union has decided to use its economic clout to push back against the clear Israeli determination to annex the whole West Bank while keeping its indigenous Palestinian population stateless and without the rights of citizenship.

That is, the growing international movement to divest, boycott and sanction the squatter institutions on the Palestinian West Bank is unlikely only to affect the latter over time. There is increasing danger of Israel proper being subjected to boycott because it is so tightly intertwined with the settlers.”

Then there was the kerfuffle over Orange Telecom’s desire to avoid having its brand used in the West Bank. While Orange backed down in the face of an onslaught by Israeli PM Binyamin Netanyahu and Israeli-American billionaire Haim Saban, the issue is not going away. I wrote about that controversy,

“The issue is not boycotting Israel proper. Richard would have had no problem with doing business with a Tel Aviv firm that had no West Bank presence. The issue is profiting from a vast project of illegal theft of an occupied people’s property. But the controversy signals something I predicted: As mainstream Israeli companies become more and more intertwined with West Bank settler investments and partners, all Israeli businesses risk getting caught up in BDS (the campaign to boycott, sanction and divest from Israeli firms implicated in the settlements). A similar dilemma hurt the Sodastream company, which suffered economic reversals after it advertised at this year’s Superbowl, drawing attention to itself. Many American consumers were disturbed to discover that one of the company’s factories was in the West Bank (it has since been closed), and they launched a boycott campaign against it.

Since the French foreign ministry (like those of the UK, the Netherlands and other European countries) has advised the country’s corporations not to partner with Israeli firms doing business in Israeli squatter settlements on the Palestinian West Bank, critics had argued that Orange is contravening French policy.

The reason for the foreign ministry warning is that European firms making money from the illegal Israeli squatter settlements on the Palestinian West Bank could theoretically be sued in European courts under the Rome Statute and under a 2004 finding of the International Court of Justice that the squatter settlements contravene international law. Orange’s Richard is eager to avoid such a lawsuit now that Partner has dragged the company’s brand into the settlement controversy.”

If the EU distinction between squatter products and Israeli ones gains traction in international law and practice, Israeli companies can’t be held harmless unless they disinvest. What the EU is doing could well enlist Israeli entrepreneurs themselves in a sort of BDS of the squatter enterprises. And that is what the far right wing Likud government fears most of all.

PressTV: “Israel struggles to convince EU not to label its products”