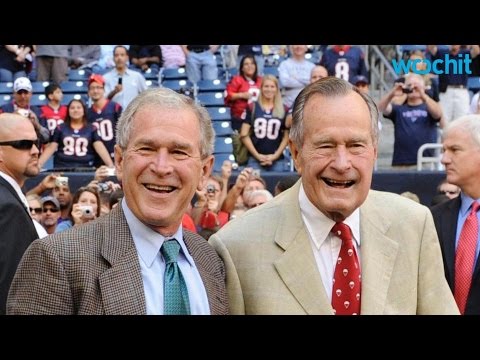 In interviews given for a new biography, George H. W. Bush, 91 lets loose against Dick Cheney and Donald Rumsfeld, whom he clearly blames for many of the failures of the presidency his son, George W. Bush. But if you attend carefully to what he said, it is clear that he actually was slamming the Neoconservative cabal that Cheney and Rumsfeld brought to Washington with them. He said:

“I don’t know, he just became very hardline and very different from the Dick Cheney I knew and worked with . . . The reaction [to 9/11], what to do about the Middle East. Just iron-ass. His seeming knuckling under to the real hard-charging guys who want to fight about everything, use force to get our way in the Middle East.”

Who were the “hard-charging guys” who were constant war-mongers, to whom Cheney “knuckled under?”

They are mainly Neoconservatives, a group of old Cold Warriors, many of whom had been Democrats, who were dismayed by the Democratic Party’s turn left in the 1970s and the rise of a New Left within it that was critical of Israel. They therefore threw in with Ronald Reagan and then W. Most were Jewish Americans, though R. James Woolsey (former CIA director) and John Bolton were Neoconservatives as well (Woolsey said he was the only Episcopalian of the lot).

Richard Perle, who was appointed to the Pentagon oversight board.

Paul Wolfowitz, who had wanted to invade Baghdad at the conclusion of the Gulf War in 1991, but who was slapped down by Bush Sr., then Secretary of Defense Dick Cheney, and Secretary of State James Baker.

Cheney and Rumsfeld brought Wolfowitz, who was obsessed with Iraq and alleged in sprng, 2001, that “Iraqi terrorism” was more of a menace than Usama Bin Laden’s al-Qaeda, to Washington in January 2001 as Deputy Secretary of Defense.

Douglas Feith, then the no. 3 man at the Pentagon, the biggest imperialist since Cecil B. Rhodes, opposed the Oslo Peace Accords and his former law partner was a spokesman for Israeli squatters on Palestinian land in the West Bank. (I’ve been criticized for saying that Feith, Beitar and a Likudnik, had no place high in the US government, as though that were racial bigotry. Having suffered for decades with the idiotic calumny that criticizing Israeli government policy is a form of racism, must we now descend into a moral cesspool where criticizing the crypto-fascist Betar & Likud Party is labeled racism? Is it also racist to say that a supporter of Milosevic shouldn’t have had high office in the US?)

Feith in turn organized a black cell inside the Pentagon, the Office of Strategic Plans, which cherry-picked intelligence in support of an attack on Iraq.

John Bolton, an ill-tempered attorney with no foreign policy experience, who was made undersecretary of state for arms control with the portfolio for “weapons of mass destruction” and was later ambassador to the UN was also from Neocon circles.

George H. W. Bush went on to criticize his son for allowing Cheney to create “kind of his own state department”.

What did Bush Sr. mean by that?

I wrote an expose of Cheney’s policy shop for Salon in 2005.

The ‘hard-charging” warmongers on Cheney’s staff, who outmaneuvered Colin Powell’s State Department, included Cheney’s chief of staff, a Wolfowitz protege, Irv “Scooter” Libby, John Hannah of the Washington Institute for Near East Policy (a stridently pro-Israel thinktank) and David Wurmser (co-author of the infamous “Clean Break” policy paper for Binyamin Netanyahu about how to invade Iraq and reshape the Middle East).

Not coincidentally, Wolfowitz, Bolton and some of these other figures have been tapped by Jeb Bush to run his foreign policy, which must drive poor George Herbert Walker up the wall. You wonder whether he isn’t speaking out like this in part to warn Jeb publicly about the Neocons’ sticky fingers when it comes to policy-making.

We knew that Bush Sr. felt this way, and I at least tended to take Brent Scowcraft’s pronouncements as a proxy for the old man’s views. Scowcroft, Bush Sr.’s national security adviser, wrote an op-ed in August, 2002, attepting to forestall the building Iraq War. He gave a similar interview about Dick Cheney, who, he said, had changed and whom he did not recognized anymore.

I don’t actually think Cheney “knuckled under” to the Neoconservative warmongers. And I don’t think his determination to make war on Iraq was post-9/11. I think as of the late 1990s Cheney wanted to open Iraq’s oil fields to exploitation and get sanctions taken off that country, and he found it impossible to convince Congress to do that. So he decided only regime change could open Iraq to bids by the medium and smaller US oil companies, who were suffering because of the inability of geologists to discover new big fields. Regime change would be a hard argument to make, so he reached out to the Neoconservatives as allies, even though before he was CEO of Halliburton (1995-2000) he had been known instead as an Arabist. So I’d say he partnered with the Neoconservatives to get his way.

Tragically, Cheney did not anticipate two developments that would have made a war on Iraq unnecessary. One was hydraulic fracturing, which puts more oil on the market despite the failure to find new big accessible oil fields. The other is the growing awareness of the dangers of climate change from burning fossil fuels like petroleum and the turn in research and development to producing ever cheaper and more efficient solar panels and wind turbines and batteries. I drive a Volt and have solar panels on my roof, and don’t need Iraq’s oil or want it.

Bush Sr. also criticized W. for his “axis of evil speech” (grouping North Korea and Iraq with Iran– an Iran that had held candlelight vigils for the US after 9/11 and whose president, Khatami, spoke warmly of the American people in New York in September of that year). This is another slam of Neocons, since that diction was the work of Canadian pundit David Frum.

Bush Sr. was also critical of Secretary of Defense Donald Rumsfeld, mainly for showboating and talking big. He didn’t go into details, but anyone who lived through it knows what he is talking about. “Democracy is messy,” he responded to the outbreak of looting and the breakdown in order in Iraq after he overthrew the government there. “Stuff happens.” “How many vases could they have?”, he responded to clips of looters stealing vases from shops. “Henny Penny the sky is falling,” he mocked people who worried that he was allowing Iraq to fall into disarray. He denied there was a guerrilla war. He later denied the 2006 civil war between Sunnis and Shiites. Criticized for not providing armored vehicles to our troops facing roadside bombs, he opined “You go to war with the army you have.” The manufacturers said they could easily up-armor the jeeps.

One thing you take away from these remarks by George H. W. Bush is that he is nowadays basically a Democrat.