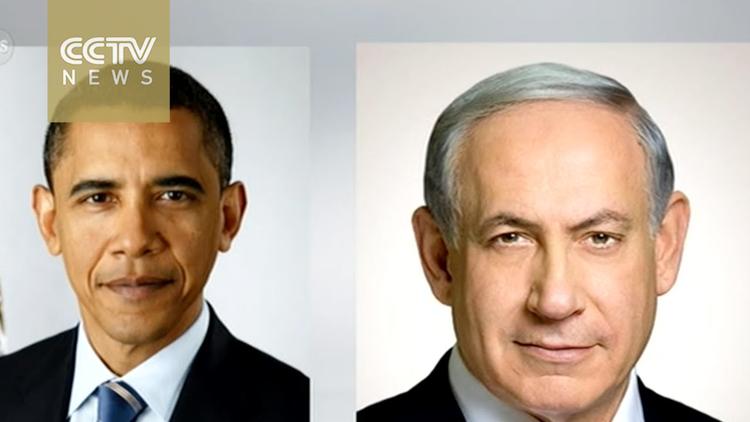 Far right Israeli Prime Minister Binyamin Netanyahu is arriving in Washington, D.C., Monday, and will apparently ask the US to almost double its $3 bn. a year in aid to $5 bn.

Netanyahu has been a constant thorn in the US side and has done absolutely nothing for his supposed ally despite all the crises in the Middle East. The theory that Israel is a strategic asset for America in the region has never been more obviously bankrupt than now. If the major US policy goal is defeat of ISIL, Iran is the best US partner.

Obama launched two attempts to kickstart peace talks between Israel and Palestine, the first spearheaded by George Mitchell and the second by Secretary of State John Kerry. Netanyahu torpedoed them both. He stepped back from a settlement freeze right in the middle of the first round of talks in 2010. He and his cabinet went out of their way to humiliate Kerry during the last round. Netanyahu is very attached to all the Palestinian territory he has stolen and he does not intend to give any of it back (he has pledged no Palestinian state). But the Palestine officials can’t be seen to sign away the future of Palestinian children entirely, and so they had no proposal from the Israeli side that they could take back to their public.

Then there was Netanyahu’s long and viciously fought campaign to undermine Obama’s Iran negotiations, and, indeed, to countermand the president of the United States on US foreign policy. This was the most astonishing interference by another country in American politics since Britain launched the War of 1812 and burned down the White House.

Obama has very little to say about the money given by the US Congress to Israel, since budget is a legislative prerogative. So there is actually little he could do to get Netanyahu to stop acting like a bull in a China shop. In the old days of the 1950s, when the US had loaned a lot of money to allies like France and Israel, President Eisenhower simply threatened to call in the loans if they did not behave (he did not approve of their aggressive war on Egypt in 1956 and made them withdraw). But the US is no longer a creditor nation.

Obama faces another restraint, of domestic politics. Jewish Americans are unusually public-spirited and give a lot more to political campaigns than other Americans, and as head of the Democratic Party, Obama does not want to chase these mega-donors, who generally deeply support Israel, into the arms of the Republican Party. These things are no longer transparent, but one suspects that Hillary Clinton is deeply dependent for campaign funds on Israeli-American billionaire Haim Saban.

But there is one simple thing that Obama could do, and it would set a very useful precedent. He could stop vetoing all UN Security Council resolutions condemning Israel’s violations of international law in Gaza and the West Bank. Just let the resolution through, and let the UNSC set sanctions if it likes.

Most Jewish Americans don’t like the colonial project of stealing the Palestinian West Bank and throwing its residents out of their homes. Those who vote for the Democratic Party and give money to it won’t abandon the party over a non-veto of Netanyahu’s crimes.

By simply informing Netanyahu of how it is going to be, and following through with instructions to US ambassador to the UN Samantha Power, Obama can make the point that the US president is not helpless and can’t be humiliated the way Netanyahu has humiliated Obama without a cost. Even better, Obama could just let the world community sanction Netanyahu for his violation of the basic human rights of Palestinians under Israeli military rule. These sanctions would then give even the expansionist and grasping Netanyahu cabinet reason to rethink its West Bank and Gaza policies.

Obama has failed at diplomacy, largely because the president no longer has any real leverage over the Israeli right wing.

Israel under Netanyahu needs some tough love from friends, since it is behaving in a highly self-destructive manner that also harms the US. Obama has nothing to lose by applying this tough love now, and this step would give him a legacy in Mideast peacemaking.

CCTV: “Netanyahu heads to US to push for military aid package”