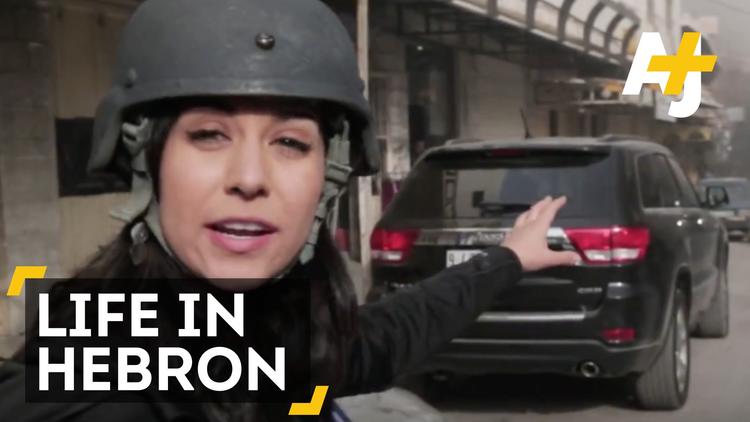 BETHLEHEM (Ma’an) — Israel’s response to an upsurge in violence since the beginning of October has seen unprecedented closures of Hebron’s Old City, with residents living in a constant state of fear amid killings by the Israeli army and attacks from Jewish settlers.

Hebron, the largest city in the occupied [Palestinian] West Bank, has borne the brunt of violence in recent weeks, with at least one third of the more than 70 Palestinians killed by Israel’s army residents of the district, nine of whom were shot dead in the Old City over the past week. 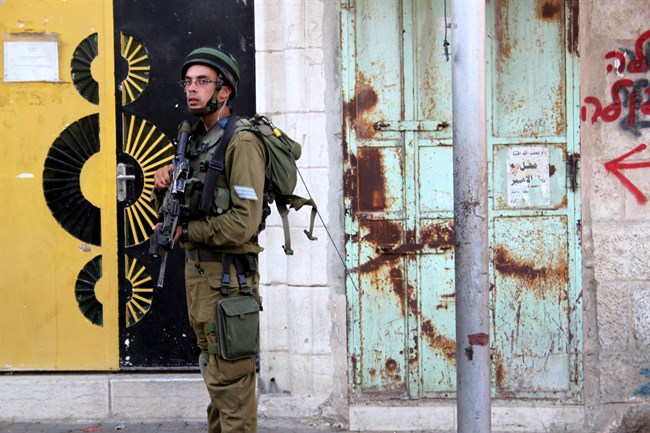 An Israeli soldier pictured in the Old City of Hebron during a settler tour.(Charlie Hoyle/File)

The city is no stranger to restrictions and violence, with over 800 Jewish settlers protected by more than double that amount of Israeli soldiers all intermingled among 30,000 Palestinian residents.

Nearly all of the killings since Oct. 26 have taken place at one of the 18 military checkpoints dotting the Old City, strategically positioned to protect Jewish settlers who have taken over the heart of Hebron.

“Life has stopped in the Old City,” Issa Amro, a human rights activist with Youth Against Settlements, told Ma’an.

“In Hebron, checkpoints are located outside people’s homes so no-one visits each other anymore. Everyone is afraid that their sons and daughters will be shot dead.”

The new restrictions in the Old City — located in the H2 area under full Israeli military rule — are an extension of an already strict matrix of control in the center of Hebron, an economic powerhouse which accounts for a third of the West Bank’s GDP.

Since 2000, around 1,829 shops have closed in the Old City, according to the UN Office for the Coordination of Humanitarian Affairs (OCHA), with 77 percent of residents living below the poverty line.

Last week, all remaining stores were ordered shut by Israeli authorities and Palestinian men aged 15-25 were prohibited from passing through checkpoints unless they were residents, with the area declared a closed military zone.

“Many Palestinians told us they were nervous about passing through Israeli checkpoints in the Old City,” Jacob Burns, a research and campaign assistant with Amnesty International, told Ma’an following a reporting visit in the area.

“This can only have increased as more Palestinians have been killed over the last week in circumstances that are disputed or where the use of lethal force was entirely unjustified.”

On Oct. 26, Saad al-Atrash, 19, was shot dead by Israeli forces near a checkpoint outside the Ibrahimi Mosque in one of many such cases.

A witness told Amnesty International that she saw Israeli soldiers bring a knife and place it in the dying man’s hand following the shooting.

Other eyewitnesses told the human rights group that he was shot six or seven times as he reached into his pocket to retrieve his identity card.

He was then left to bleed for around 40 minutes, with soldiers failing to provide him medical treatment, witnesses said.

A person must pose an “imminent threat” to life in order to make the use of intentional force legitimate, Burns explained, with the possession of a knife not legitimate grounds alone to be killed.

Three days after al-Atrash was killed, another Palestinian identified as Mahdi al-Muhtasib, 23, was shot dead near the Ibrahimi Mosque.

Video footage shows an Israeli soldier shooting the 23-year-old as he lies on the ground clearly injured and incapacitated, after having already been shot.

“Based on videos and other evidence that has emerged, we think the killing of Mahdi al-Muhtasib on 29 October should be investigated as an extra-judicial execution,” Burns said.

“Palestinians I spoke to in Hebron were really scared. There is a sense amongst them that Israeli forces have adopted a ‘shoot to kill’ policy.”

That feeling has been widespread since Hadeel al-Hashlamoun, 18, was shot dead on Sept. 22.

Amnesty said at the time that her killing appeared to be an extra-judicial execution, and a subsequent internal inquiry by Israel found her death could have been avoided.

“With so many of the killings over the past month resembling the circumstances of Hadeel’s killing, however, it’s not enough to investigate after the fact – Israel’s forces must immediately change the way they operate to prevent further needless and unlawful killings.”

Parallel to a surge in killings in Hebron’s Old City, the month of October has also seen a dramatic rise in the incidence of settler violence, with Palestinians held hostage between checkpoints, Israeli soldiers, and Jewish extremists.

He said settlers, who are heavily armed, often point their guns at Palestinians to scare them.

“They also lie to soldiers, saying ‘He has a knife! He has a knife!’. People are afraid and they don’t sleep. They are in a jail without protection or safety.”

Amid a spate of unlawful killings by Israeli soldiers, false claims of Palestinians carrying weapons can serve as death sentences.

Settlers, however, have also been directly involved in the killing of Palestinians, often under the protection of Israeli military forces.

“An Israeli civilian, presumably a settler, shot and killed Fadel al-Qawasmeh while he was walking to work along al-Shuhada Street in the Old City on 17 October,” Burns, from Amnesty International, told Ma’an.

“Witnesses told us that a settler followed him up the street after a soldier turned him back towards an Israeli checkpoint, insulted him, and then shot him in the back.”

Amnesty said that later that day, masked Israeli security personnel in civilian clothes raided a house from which residents had witnessed the killing and deleted photos and videos they had taken on their phones.

Settlers have attacked and harassed the residents of the property several times since, according to Amnesty International.

The group has also documented several serious incidences of settler violence since al-Qawasmeh’s killing, including a 13-year-old Palestinian injured in the chest by a Molotov cocktail hurled by settlers the night of Oct. 17.

A cousin who attempted to help him was then hit by a large rock thrown by settlers from Kiryat Arba.

Witnesses said Israeli military forces were present but failed to intervene, with an ambulance unable to reach the child due to the ongoing attack.

The Temporary International Presence (TIPH) in Hebron, a civilian observer mission established in 1997 by Israel and the PA, said it has witnessed an escalation of violence in the city in October, and has increased its patrolling of hot-spots.

A press and information officer with the group told Ma’an that TIPH is concerned about an increasing number of attacks in the Old City, calling on security forces to take all measures to prevent the loss of lives.

Amro, who works and lives in Hebron, says that Palestinians feel like they have no protection in an environment that is growing increasingly more violent each day.

“It was bad before, but the new order is shoot to kill, and then confirm the killing. They shoot then ask questions,” he said.

“In the past, soldiers targeted people in the resistance, now there is the feeling among people that they will kill anyone.” 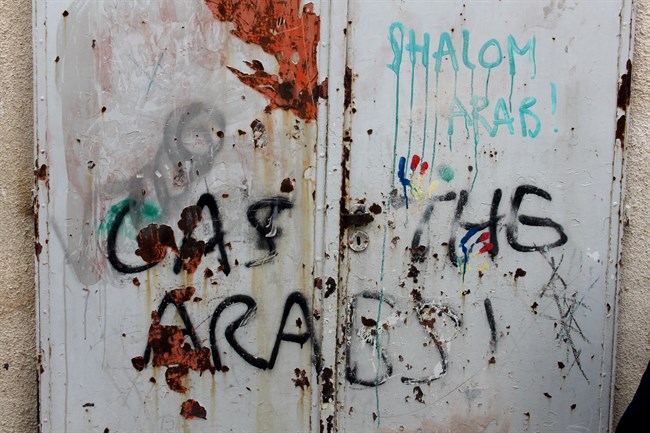 Graffiti sprayed by Jewish extremists in the H2 area of Hebron.(Charlie Hoyle/File)