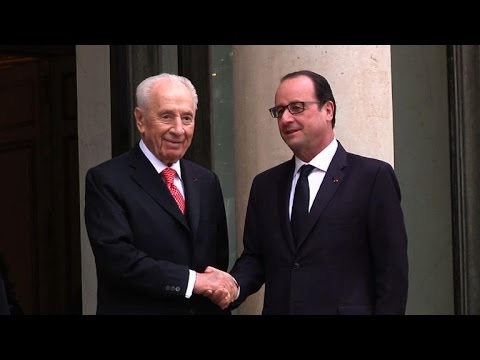 Former Israeli president Shimon Peres, 92, gave an interview with the Associated Press Monday in which he spoke bluntly about the mistakes of prime minister Binyamin Netanyahu, without naming him.

Of the Greater Israel project of the country’s right wing, which aims at annexing the Palestinian West Bank while keeping the people there stateless, he said,

“Better to have a Jewish state on part of the land than have the whole land without the Jewish state,” he said. “Israel should implement the two-state solution for her own sake because if we should lose our majority, and today we are almost equal, we cannot remain a Jewish state or a democratic state . . . That’s the main issue, and to my regret they (the government) do the opposite.”

That is, Peres thinks that the Likud Party and its partners are living in a fool’s paradise if they believe they can annex the whole of Palestinian territory without getting the Palestinians as Israeli citizens eventually. And then, Peres says, no more Israel as a Jewish state.

Netanyahu is willing to live by the sword more or less permanently in order to accomplish his annexation of the Palestinian West Bank. Peres thinks this approach foolish and dangerous.

“The alternative to two states is a continued war and nobody can maintain a war forever. If you say we should live on our sword don’t forget that there are other swords as well . . .

Peres called bullshit on Netanyahu’s constant refrain that he is ready for peace talks, noting that he never has actually concluded any peace agreements. It is all talk, he said.

“A politician and a government should be judged by one way only, on the record of what you do or did, not on what you say . . .”

Peres remains convinced that assassinated Israeli labor leader Yitzhak Rabin, killed by an Israeli rightwinger, would have made peace with the Palestinians and that his killing was a turning point in Israel’s history.

This is Juan speaking: I went to visit the tomb of Yitzhak Rabin the last time I was in Tel Aviv. I was disappointed that it seemed small and hard to find. He seemed to me to deserve something grander. Maybe what’s left of the Israeli left wing can do something about this.

The big difference between Peres and Netanyahu is that Peres is a realistic Zionist. He has his eyes open about the likely consequences of the annexation of the Palestinian West Bank. The world is turning against Israel because no one likes Apartheid practices or creeping ethnic cleansing. That Israel can usurp the land without absorbing the people seems a remote possibility to Peres.

Another point of realism is that Peres understands that the Arabs and other pro-Palestinian powers won’t be weak and supine forever. Already the Gulf states are building highly sophisticated militaries. Turkey, which under President Tayyip Erdogan is pro-Palestinian, is a member of NATO and has actually had Israel disinvited from some NATO activities. Israel’s nuclear arsenal of several hundred bombs forestalls any conventional invasion. But we increasingly live in an era of micro-wars, in the fight against which Israel has proved vulnerable.

Netanyahu thinks he can fight a forever war, and that he can grab up the Palestinian West Bank while successfully excluding the Palestinians from the rights of citizenship in a state.

Peres is sure he cannot do either.