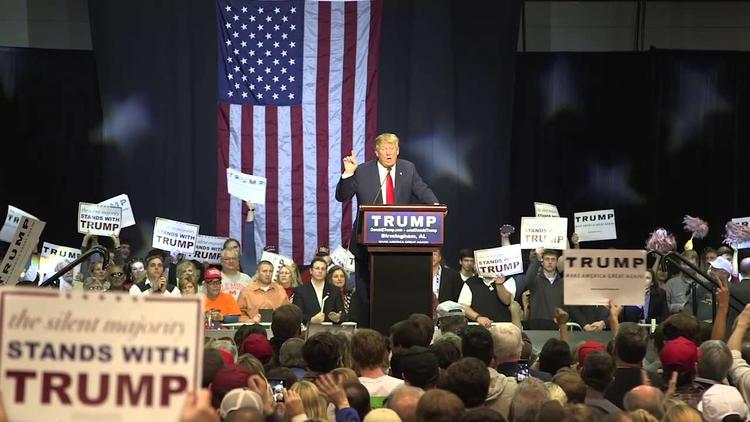 As Donald Trump supporters beat a ‘Black Lives Matter’ protester at his rally in Birmingham, Ala., Trump himself reminded us of the dark days when a paranoid J. Edgar Hoover had the FBI monitor the Rev. Martin Luther King and black Churches of the Southern Christian Leadership Conference.

Trump said in Birmingham, “I want surveillance of certain mosques . . . We’ve had it before, we’ll have it again. … We have a situation where ISIS has raised its ugly head again and we have to chop off that head like they’re chopping off heads.” He also said he would send Syrian refugees back to Syria if he were elected. Many Syrian refugees have fled because they would be killed in their homeland.

The African-American protester was beaten, kicked and pulled down, with 8 or 9 people on top of him, as he was called a “monkey” and the N-word. You wonder if they were wearing brown shirts. The Trump campaign later said it did not condone the behavior, but we haven’t heard Trump himself publicly denounce it. During the altercation, Trump said from the podium, “Yeah, you can get him out. Yeah, get him out. Get him the hell out of here.”

Trump’s desire to spy on American congregations recalls Cointelpro and other domestic surveillance programs of the 1960s that led to massive abuses and in some ways led to Watergate under Nixon.

The ACLU noted that the FBI looked into King in the late 1950s and:

“The FBI formally opened another investigation of Dr. King and the SCLC in late 1962 under an FBI pro gram called COMINFIL that permitted investigation of legitimate noncommunist organizations suspected by the FBI of having been infiltrated by communists. The charge was ludicrous. Dr. King repeatedly criticized Marxist philosophy in his writing and speech es and all evidence indicated the Communist Party had little, if any, influence on Dr. King or the SCLC.”

Since Rev. King and the SCLC advocated nonviolence, there were no actual legal grounds for an FBI investigation of them. They had broken no federal law.

The FBI also tried to stop Rev. King from meeting the Pope, and pressured church leaderships to make sure he received no donations for his work from their congregations. It tried to prevent him publishing in a national magazine, a clear violation of the First Amendment. And, of course, field officers unconstitutionally bugged his bedroom without any warrant.

On another occasion, according to the ACLU says documents show that the FBI spied on a Roman Catholic group:

In an earlier time, during the 1940s, the Federal government not only spied on but actually illegally interned Japanese Buddhist priests.

Trump’s proposals resemble those of other historical figures in other places. It should be remembered that after 1938 in Mussolini’s Italy, as C. Fonio writes,

“Following the racial laws, the Ovra specifically focused on spiritual matters. Surveillance through personal biographical files on Jews, but also on Pentecostals and Jehovah’s Witnesses, became common practice and special inspectorates carried out ‘religious persecutions’ (Franzinelli 1999, 370). Pentecostals were considered anti–fascists and rebels and thus ‘subversives’ like the communists (1999, 366). The prefects solicited the Carabinieri to record all the Jews who either lived or passed through their provinces. In particular they collected detailed information on jobs, incomes, behaviors and attitudes towards the regime (Franzinelli 2001, 141). Institutional top–down surveillance was greatly facilitated by ordinary citizens who denounced Jews thanks also to a harsh campaign of propaganda in the press which, however, is not enough to explain why Italians informed the State about Jews who violated the law.”

Trump’s campaign has not only a lot of 1958 Alabama about it, it has a lot of Rome 1938 about it. It is a blot on the countenance of the American Republic.

Al.com: “Watch Donald Trump speak at a rally in Birmingham”