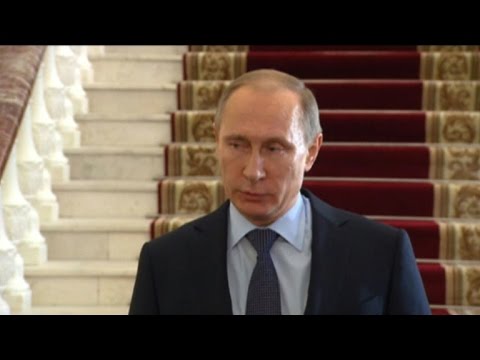 Russian President Vladimir Putin on Wednesday explained his rationale for asking Russian tourists to leave Turkey, and it is ominous. He anticipates that there may be further “incidents” between Turkey and Russia over Syria policy, and that Moscow may be constrained to “respond.” In that case, Putin does not want large numbers of Russian tourists in Turkey lest they become hostages.

At the same time, Russia refused to back off its bombing campaign in support of the Syrian Arab Army in northern Latakia province. It flew 12 bombing missions up there, in the same area near the Turkish border where the plane was shot down on Tuesday. The air missions were in support of infantry fighting al-Qaeda in Syria and Turkmen militias in the Kurd Mountain and Turkmen Mountain regions of northern Latakia.

Putin’s remarks were of a somewhat different tenor than those of his foreign minister, Sergei Lavrov, who said that Russia has no intention of going to war with Turkey over the downing of an Su-24 fighter jet, continues to seek good relations with Turkey, and was not being vindictive in instituting a tourism ban. On the other hand, the foreign ministry site does say he dressed down his Turkish counterpart.

“Question: Yesterday, the Foreign Ministry gave the recommendation that Russian tourists should not travel to Turkey. What is your view on this recommendation, given that hundreds of Russians are holidaying in Turkey?

President of Russia Vladimir Putin: We don’t have much choice. After such a tragic event as the downing of our plane and death of our pilot, we have no choice but to take such measures. The Foreign Ministry is right to warn our citizens about the dangers.

You see, the problem goes beyond the tragedy that happened yesterday. It is a much deeper problem. We see, and not only we, but people all around the world see that Turkey’s current government has been following a domestic policy of quite conscious Islamicisation throughout the country for a number of years now.

Islam is one of the world’s great religions and it is one of Russia’s traditional religions. We support Islam and will continue to do so. But the problem here is one of support for more radical currents, which creates an unfavourable environment that is not so evident at first glance.

After what happened yesterday, we cannot rule out the possibility of other incidents. If such incidents happen, we will have to respond one way or another. Our citizens in Turkey could face substantial risks, of course, and the Foreign Ministry has a duty to say this.”

Putin stressed that the Russian government “supports Islam” and that the faith is one of Russia’s ‘traditional religions.’ But, he said, the Turkish government is supporting a radical strain of the religion.

The ruling Justice and Development Party (AKP) of president Tayyip Erdogan is not in fact a movement of radical Islam, and it has promoted relatively few policies that could be characterized as specifically Islamic. In the last decade, it functioned as a center-right party that had a strong religious constituency and promoted pluralism. In the past three years, however, Erdogan has acted more and more dictatorially and has deployed a strident religious rhetoric. He has been accused by his enemies of supporting fundamentalist and even radical Muslim movements abroad. It is hard to judge the accuracy of these charges, which involve covert operations inherently designed to be opaque to the public.

In any case, Putin’s answer to the question about ceasing Russian tourism in Turkey is disconcerting. It seems clear that he thinks it entirely possible that there will be more hostilities, and that the next time he may reply more forcefully, in which case he doesn’t want a lot of Russian citizens sunbathing on the beach at Antalya.

Putin said that both pilots of the downed jet had been recovered, contrary to initial reports. He said he intends to install S-300 anti-aircraft batteries a the Russian base in Latakia Province in a bid to avoid a repeat of the shoot-down of the Russian plane. But note that this step implies that it might be Turkish planes that are shot down if they enter Syrian airspace (which apparently they do all the time).

The foreign ministry site makes Lavrov sound more forceful than did his news releases, as well:

“Lavrov expressed indignation at Turkey’s unfriendly actions. It was stressed that, by shooting down the Russian aircraft that was out on a mission as part of the antiterrorist operation of the Russian Aerospace Forces and had not breached the boundaries of Turkey’s airspace, the Turkish leadership in effect took the side of ISIS. By all appearances, the action was premeditated and planned in advance, and moreover it pursued quite clear objectives. In this connection, the minister recalled Turkey’s participation in ISIS’ illegal trade in oil, which goes though the area where the aircraft was brought down, as well as the terrorist infrastructure deployed there, arms and ammunition depots and control centres. Lavrov particularly noted that this step would have serious consequences for Russian-Turkish relations and would not go unanswered.”

AFP: “Putin backs advice for Russians not to travel to Turkey”