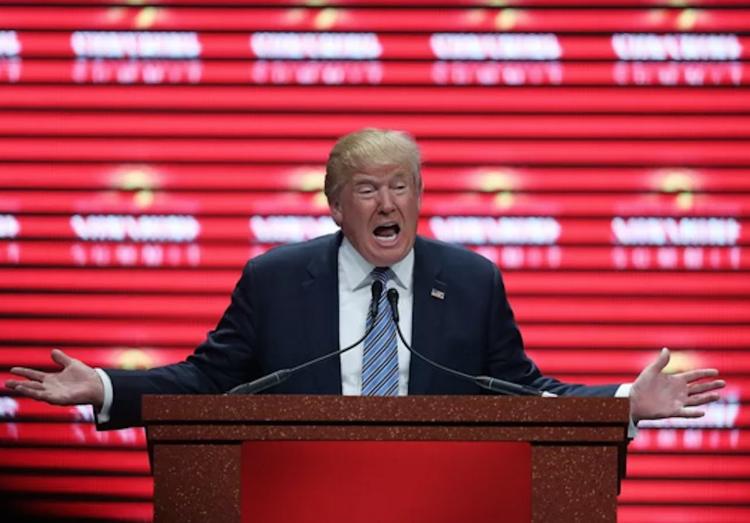 GOP presidential hopeful Donald Trump, having said earlier that he might seek to close down mosques if he were president, on Thursday went further and said he would implement a registration and tracking database for Muslim-Americans.

Rabbi Jack Moline of the Interfaith Alliance pointed out that the Nazis made Jews register. When a reporter asked Trump how his plan for Americans of Muslim heritage differed from the National Socialist policy of registering Jews, he replied “You tell me.”

Trump is gradually providing us with the material for a 21st-century version of Pastor Martin Niemöller’s post-war cautionary poem that would go like this:

First they came for the undocumented, and I did not speak out— Because I was not a undocumented.

Then they came for the Muslims, and I did not speak out— Because I was not a Muslims.

Then they came for me—and there was no one left to speak for me.

Trump’s increasingly erratic pronouncements are part of a steady escalation of frightening rhetoric in the Republican presidential campaign.

The first thing that comes to the mind of Constitution-honoring Americans is that we don’t have to worry about Trump’s broadsides because even if by some weird fluke he became president, half the measures he proposes would be ruled unconstitutional by the courts.

You can’t for instance, actually close a mosque by presidential executive order, since Americans have a first amendment right to worship as they please.

Making a particular religious minority register with the Federal government while not requiring it of members of other religions also violates the first amendment.

So we don’t have to worry, right?

Let’s say that Hillary Clinton self-destructed in some fashion next summer and that Trump wins the November 2016 presidential election.

And let’s say that in spring of 2017, a major terrorist attack takes place in a major American city.

Terrorism makes judges cautious. No one wants to be blamed for a ruling that that might allow the next attack. It also can make them bitter and vindictive.

And that is it, Since the GOP has the House, sewn up via state gerrymandering, probably for several election cycles to come, it will presumably legislate to please a GOP president.

If judges (or Supreme Court Justices) allow themselves to be bullied by the hysteria gripping the country, then game over. Muslims would be down at the post office registering.

We can also legitimately worry about the potentially sinister role of a Trump-appointed FISA court in the face of abrogation of civil liberties.

After all, the Feds were allowed to intern Japanese-Americans, which was also completely unconstitutional.

The second thing to say is that Trump has already gone after Mexican-Americans and Muslims, and is unlikely to stop there. Whatever syndrome his mind is suffering from involves both paranoia and narcissism. If he fixes on college teachers next, or journalists, or other groups, he’d already have the Muslim precedent and could just use an executive order to target those other groups. If the courts are sufficiently wimpish, then getting a court to strike down the Trump executive order will be difficult and time- and money- consuming. In the meantime, Trump could have his way unilaterally for a long time.

We already have the situation where Barack Obama allowed the National Security Agency to spy on all our metadata without a warrant. That metadata includes cellphone pings that show your location. It isn’t just the Muslims that the national security state wants to track.