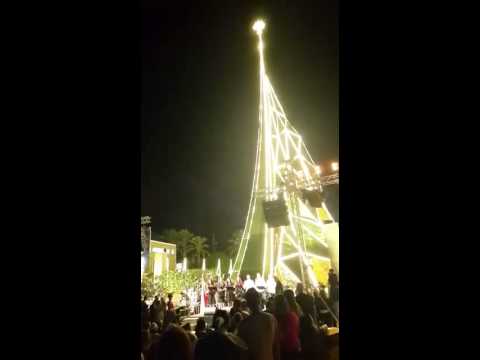 Whether Christmas is joyous sad or nervous-making for Christians in the Middle East this year depends very much on the country in which they live. It should be noted that many of them follow Eastern traditions such that Christmas is not celebrated on December 25. The Coptic Christians of Egypt will hold their celebrations on January 7. Those in the Sudan seem to have opted for January 8.

Omar Ibrahim at Huffington Arabic argues that in Lebanon, Christmas this year has taken on a political dimension. It was once celebrated inside homes and publicly in Christian areas like Jounieh. But this year trees and creches and lights have been erected even in neighborhoods that are predominantly Muslim. Ibrahim thinks this generalization of Christmas as a Lebanese holiday is in part economic, since retailers hope everyone, and not just Christians, will get gifts or go out to eat. (If so, it would be functioning for non-Christians as it does for Buddhists and Shintoists in Japan). But Ibrahim says his interviewees on the street also gave him the impression that the Lebanese Christians are signalling with this very public nationwide Christmas that they are there to stay and are not going anywhere. This stubborn digging in of heels has to do with the ethnic cleansing of Christians by Daesh (ISIL, ISIS) in cities like Mosul, in Iraq. Lebanese Christians refuse to be victims.

The rise of Daesh has contributed in some ways to Lebanese solidarity. Lebanese Shiites despise Sunni radicalism. So do Christians and middle class Sunni Muslims. To the extent that many Lebanese Sunnis nevertheless want to see Bashar al-Assad overthrown, they are the odd man out and likely form a minority of the Lebanese. The Christians (who aren’t pro-al-Assad, just anti-Sunni radicalism) are with the majority for once.

In those parts of Syria where something approximating a normal life is possible (e.g. much of Damascus), Christmas is being celebrated publicly, and, as in Lebanon, often non-Christians are joining in.

For non-Salafi, mainstream Muslims who commemorate the Prophet Muhammad’s birthday, it is perhaps important that this year it falls on Christmas. There are lots of photos on the Web of such joint celebrations.

Among the 1.4 million Syrian refugees in Lebanon, probably only a few hundred or a few thousand are Christians. It isn’t a nice Christmas for them.

The some 5 percent of the 22 million Syrians who are Christian, or roughly 1.1 million, are having a gloomy holiday season. Al-Qaeda and Daesh are the biggest and most powerful opposition groups, and would commit genocide against the Christians if they could. The regime of Bashar al-Assad, which willy nilly is a sort of refuge for minorities, is a sordid police state that routinely tortures political prisoners and drops barrel bombs on kindergartens. It isn’t a pretty picture.

The Palestinian Christians in places like Bethlehem are suffering because of Israeli and settler crackdowns on Palestinian civil society, as Jewish-Palestinian violence has spiked this summer and fall. Also, the tourist trade is enormously reduced this year, hurting Christian retailers. Bethlehem has anyway been harmed by being surrounded on three sides by the Apartheid wall, which took away land owned by Palestinians.

In Iraq, it is dark days, as Christians have been ethnically cleansed from Mosul and have been attacked in Daesh territory.

In Jordan, where Christians are about 10% of the 6 million people, or 600,000, there is nervousness about having Daesh next door.

Egyptian Coptic Christians have some good news on the political front. When the dust cleared in the recent parliamentary elections, it turned out that there were 36 Coptic Christians in that body, the highest number ever. There are 596 seats. That is about 6%, which is likely also the percentage of Christians in the Egyptian population (estimates range from that to 10%). Of these Christian MPs, 24 were elected on party lists. But 12 were elected as independents, at large. Analysts point at that whereas a list can bring along a minority (the party lists decided in what order seats are filled), those who were elected as independents were elected mainly by Muslims, and were chosen by voters regardless of religion because they were felt to be the best person to represent that district.

Christians had been very concerned about their fate under the Muslim Brotherhood government of deposed president Mohammed Morsi. In fall of 2012, Christian delegates to the constituent assembly drafting a new constitution resigned because Morsi was marginalizing them.

This is not to say that Copts are in any way satisfied with creeping authoritarianism. Many prominent Coptic web sites run news with critical analysis of this tendency. Like any minority, they want an end to discriminatory practices.

On the other hand, the Coptic church has been riven with controversy over the visit of Coptic Pope Tawadros II to Jerusalem to attend the funeral of a deceased cleric. It was the first visit of a Pope to the Occupied Territories under Israeli rule since they were seized in 1967. Some Coptic intellectuals worried that the high-profile visit put Christians even further in the cross hairs of Muslim radicals.

Still, Copts in Egypt, despite the challenge of being a minority in a largely Sunni Muslim country of 84 million, are numerous and do have some influence. It is not clear how many they are (they claim 16 million but that seems to me unlikely; it is probably between 5 and 8 million.

Although there have been allegations of substantial outmigration of Coptic Christians from Egypt since 2011, there isn’t actually any good evidence of it.

I have a friendly disagreement with Charles Sennott at Globalpost, who sees Christianity dwindling and disappearing in the Middle East.

I don’t deny that in some countries the proportion of Christians has shrunk, and in some countries (Iraq) Sennott is just right about dwindling. But if you count absolute numbers over the last 150 years, there are way more Christians in the region than ever before. I wrote,

The argument for decline is usually made from Lebanon, where Christians were a bare majority in 1931, but are now something like 22%. But Lebanon’s population was about 800,000 in 1931, so Christians were 408,000. Lebanon’s population is now 5 million, and Christians inside the country are about 1.1 million. So with all the vast Christian Lebanese emigration abroad, to Brazil, Argentina, Chile, the United States, Mexico, etc. (with perhaps 6 million Lebanese-descended people in the New World), there are still twice as many Christians in Lebanon in absolute terms now as there were in 1931. And although it is consequential politically that Lebanese Christians are now less than a third of the adult electorate, they are hardly powerless. They dominate the presidency, the officer corps, and the business world, and they are split between allying with the Sunni Muslims and allying with the Shiites, which gives them influence as a swing vote.”

One of the things you have to remember about Egyptian Christians is that there are still a lot of rural ones who have big families, in Upper Egypt. Unlike the situation of the Eastern Orthodox in Lebanon, who are largely urban and so have smaller families, and have seen Shiite clans become much bigger, in Egypt the rural Christians are likely holding their own with regard to population growth.

It is way too soon to write off Middle Eastern Christians as a vital force in society.