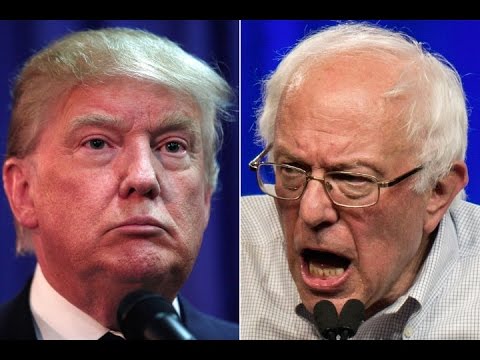 ABC World News has given one minute to Bernie Sanders this year (actually, it is just 20 seconds). It has given 81 minutes to Donald Trump.

Bernie is taking on corporations, and it is the corporations that are reporting on him, or rather blacking him out.

Trump is a corporation, and is a true American fascist. Moreover, his rhetorical bomb-throwing attracts eyeballs, which lets Disney Corp. charge more money for commercials aired during ABC World News.

Bernie in polling consistently defeats all the GOP candidates in a one on one contest. So why isn’t he the newsworthy one?

What better for corporate news. You pretend there isn’t a candidate in the race addressing growing economic inequality or the woes of the working class. You put all the spotlight on someone who insults and even incites against Mexican-Americans, African-Americans and Muslim-Americans. It is a tried and true tactic of the American business class to keep the workers and middle class divided by playing up minor ethnic issues.

The end result, however, is fire-bombing of mosques and attacks on minorities and other white hood phenomena familiar from past epochs of American history.

Write ABC News and tell them we want them to be more socially and politically even-handed and responsible. Tell them they are polluting our airwaves with hate and ignoring the healing messages, all for a profit off the people’s airwaves.

Having the news be a profit center, having it be in the Entertainment division, and giving limited American airwaves away to corporations who use it so recklessly is against everything the Founding Fathers stood for.

We need a people’s Federal Communications Commission, to push back against this naked attempt to divide us and demagogue us and keep us down. A handful of multi-billion-dollar conglomerates owns all major media news outlets. They will reply that the cybersphere has allowed diversity, but the airwaves dominate the cybersphere conversation, and anyway you can’t compare the influence of a blogger to that of ABC News.

The delivery of corporate news depends on public accommodations; they owe the public more than this.

We need to restore the principle of fairness in the reporting of political news. Because the lapsing of that principle is taking this country down the road of the brownshirts. It should be remembered that in Europe as well, a coalition of corporations, fascist political parties and churches took the continent into a far-right death spiral.

If needs be, we need a constitutional amendment.

Obviously, we have to start by taking back control of the drawing of political districts from the political parties, as California and Ohio have done, and make it a neutral matter. We’ve been gerrymandered into a permanent far-right majority in Congress.

When that naked power-grab is reversed, then we can legislate three or four key measures that would reverse the dominance of a left-liberal American majority by a handful of hateful billionaires and some surburban hangers-on.

We’ve been had, folks.