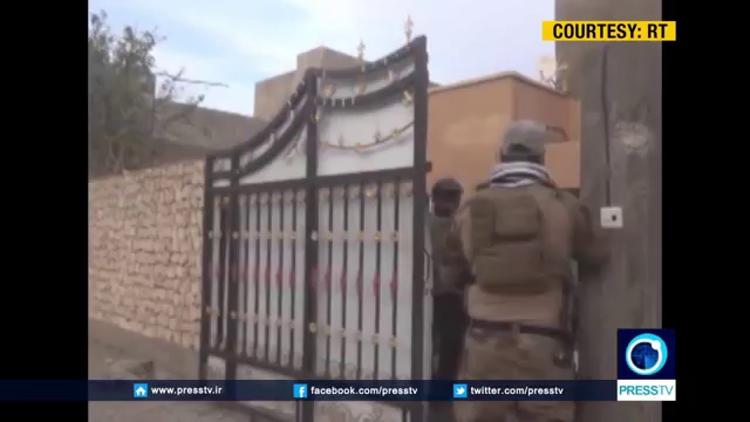 Given the large number of vehement pronouncements by US presidential candidates about the dire threat from Daesh (ISIS, ISIL), and attacks on President Obama for not doing more, you would think that the American public would be hanging on every word about any progress against the radical organization. Ted Cruz is even talking about using nuclear weapons in this fight!

And yet the slow, grinding, but increasingly successful struggle of the Iraqi government and its allies against Daesh in the major city of Ramadi has been curiously slighted on US television news.

Ramadi fell to Daesh last spring, soon after the Iraqi government took Tikrit, a large Sunni city north of Baghdad with a population before 2014 of some 500,000, away from the radicals. Ramadi is capital of largely Sunni Arabi al-Anbar province. Most people in Ramadi have by now fled the city, leaving behind perhaps some 15,000 trapped there by 1,000 Daesh fighters. The Iraqi military and its Shiite militia allies surrounded Ramadi and have largely cut Daesh off from resupply of arms and ammunition.

It is unacceptable to Iraqi Shiites, the majority, for Daesh to control Ramadi because of its proximity to the Shiite shrine city of Karbala.

But it is being reported that the lead in Ramadi is being taken by US-trained regular Iraqi troops supported by both Shiite militias and some Sunni clansmen.

The Tikrit campaign had been a military success but a political failure, since it was mainly spearheaded by Shiite militias, who committed reprisals once they took that city. Most of Tikrit’s population appears to have fled, and it is still something of a ghost town. The retaking of Ramadi can’t look like that of Tikrit if it is to be a political as well as military success.

The Iraqi government announced Tuesday that the entirety of al-Ta’mim district in the southwest has been captured, after Daesh was softened up by artillery barrages and aerial bombardment. The Iraqi military says it has entered the city center and has captured the city’s Operations Command center.

The spokesman for the army said that the campaign would likely take another two weeks or so to completely liberate the city. Such projections should be taken with a grain of salt, since this campaign began in the middle of last summer and is only now showing substantial progress. But that the government will win in Ramadi over time seems assured. The US military had said at the beginning of December that this campaign would stretch on for months, and the US seems to have been surprised at the Iraqi military breakthrough.

On Wednesday, Daesh fighters attempted to counter-attack in the city center, but fierce US bombardment and determined Iraqi government resistance pushed them back and consolidated Baghdad’s hold. It is a good sign that Iraqi troops are holding their ground now, in contrast to summer of 2014 when those garrisoned in Mosul just ran away from Daesh.

Now that victory is within sight, US Secretary of Defense Ash Carter is offering US helicopter gunships to finish Daesh off in Ramadi.

If Daesh loses Ramadi, its hold on al-Anbar province generally will be much weakened. Iraqi forces operating north of Ramadi have begun the work of cutting off supply lines to Daesh positions in Syria. Ultimately, Mosul will be cut off, surrounded and invested.

The end of Daesh militarily can be envisioned. But unless the Iraqi government becomes more inclusive and politics successfully with Iraqi Sunnis (and spends some of its billions in oil income to rebuild their cities), then radicalization will remain a threat.

Meanwhile, critics of President Obama’s plan, set out 18 months ago– which involved training of Iraqi troops and rebuilding the Iraqi army and the offer of close air support to them– may have to eat some crow. That is, they may have to if US cable news bothers to notice that out there in the real world, Daesh is facing another major setback, after its losses of Tikrit, the refinery town of Beiji, and the Kurdish area of Sinjar.

PressTV: “Footage of Iraqi army house to house search for terrorists in Ramadi”