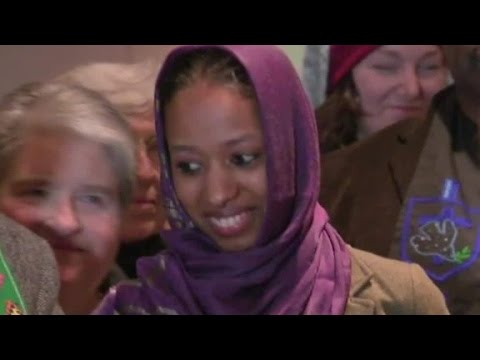 History Buff blog asked me what I thought, and this is what I told them:

One of the more common names for God in Genesis is Elohim, “the Gods,” but understood, at least later on, in the sense of “the God.” It may be that the word reflects an evolving understanding of monotheism, such that ancient Canaanites believed in a council of gods, but as some of them limited their worship to YHWH, they reinterpreted the plural to be singular in effect. The root of Elohim is Eloh, or ‘*L*H, the common Semitic triliteral root for the divine (the initial apostrophe is a glottal stop, which is used as the “seat” for the ‘a’ or ‘e’ sound)..

The most common name for God in the Qur’an is Allah, in which the deffinite particle has been mashed into the word. Originally that was al-Ilah, “the God” Ilah is the same as Eloh; both come from the triliteral root ‘ *L* H* .

So, philologically, the Hebrew Bible and the Qur’an use the same Semitic root for God, and as a historian I’d say that means they worship the same God.

The Elohim of the Bible was said to send the patriarchs Abraham, David, Solomon, and prophets like Isaiah to humankind.

The Allah of the Qur’an is depicted as sending the same prophetic figures, as well as John the Baptist and Jesus.

So the Qur’an thinks that Allah or al-Ilah is Elohim, since both words name a divinity that has acted in human history with the very same inspired envoys.”

My reasoning here is historical and philological (word-study). If you asked if West Semitic peoples who worshiped the storm god Hadad were worshiping the same god as the Adad of the Assyrians and Babylonians, you’d certainly say yes. They all speak Semitic languages, the word is recognizably related, and Adad has the same attributes as Hadad.

There is also the matter of logic. Christians maintain there is only one god. Therefore, if someone asserts that they are worshiping the one God, it must be the one Christians say they believe in. There isn’t another god to worship, according to Christianity.

Moreover, Muslims say they worship the God who sent Abraham, David, Solomon, John The Baptist and Jesus to humankind. There are more verses about Mother Mary in the Qur’an than in the New Testament. That is, Muslims recognize the same God as Christians from the point of view of his actions in human history.

Christians have their own theologies (a lot of them!) and I’m not trying to tell them what they believe. That’s up to them. I’m simply pointing out that if they maintain that Muslims worship a different god, they are saying there is more than one god, which is contrary to most known Christian doctrine.

Could Christians say that Muslims may be trying to worship the same god as Christians, but are conceiving of God differently, and so misunderstanding Him?

The notion of better Christian understanding of the one God is dangerous spiritually. If the Christian God created 100 billion galaxies 13.8 billion years ago, He would be pretty hard for human beings to understand. Many Christian thinkers through the centuries have held that God is unknowable. If so, then Christians don’t know Him better than Muslims.

I recently had a Christian audience member maintain to me that God’s grace is restricted to Christians and Jews, and doesn’t extend to Muslims. OK. But even if you believed that, it wouldn’t follow that the two worship different gods. Moreover, how could you be sure that God wouldn’t extend His grace to other communities? Are you trying to tell Him what he can do?

I know that the Wheaton College action is coming from an Evangelical point of view. But let us consider further, beyond Pope Francis, what Roman Catholicism, the largest branch of Christianity, with some one billion adherents, says about this:

and then the following year:

““The Church has also a high regard for the Muslims. They worship God, who is one, living and subsistent, merciful and almighty, the Creator of heaven and earth (Cf. St. Gregory VII, Letter III, 21 to Anazir [Al-Nasir], King of Mauretania PL, 148.451A.), who has spoken to men. They strive to submit themselves without reserve to the hidden decrees of God, just as Abraham submitted himself to God’s plan, to whose faith Muslims eagerly link their own. Although not acknowledging him as God, they venerate Jesus as a prophet, his Virgin Mother they also honor, and even at times devoutly invoke. Further, they await the day of judgment and the reward of God following the resurrection of the dead. For this reason they highly esteem an upright life and worship God, especially by way of prayer, alms-deeds and fasting. . .

“Therefore, the Church reproves, as foreign to the mind of Christ, any discrimination against people or any harassment of them on the basis of their race, color, condition in life or religion.”

So I think the Second Vatican Council certainly affirmed that Christians and Muslims worship the same God. Someone should quote to our current “Christian” politicians the Vatican’s reproach of discrimination and harassment directed toward Muslims.

The Presbyterian Church has an interesting take on all this, writing

“Christians respond to the challenges of our contemporary encounters with Islam through faith in the sovereignty of God over the world. Our search for faithful living must be motivated by a desire to love God, to be obedient to God’s will, and to love neighbors as ourselves—whether they be “neighbors” or “enemies.” Where this may lead and how it will bring new understanding between Christians and Muslims rest in the mercy and grace of God. Both Christians and Muslims are challenged to allow God to guide them into a future free from hatred, free from fear, and directed by hopeful love. The future holds the possibility that in our shared life, Christians and Muslims may faithfully respond to God and realize the peace and justice so desperately needed.”

(Donald Trump should read this statement; doesn’t he claim to be a Presbyterian, ‘right down the middle’?)

These Christians are starting not from what people believe in, but from the sovereignty of God over the entire world. That is, the God Christians believe in is also sovereign over Muslims. The question then is how people of different faiths respond to that sovereignty. It isn’t a question of believing in different gods, but of meeting the challenge thus posed.

We may conclude that the 1.5 billion Muslims in the world maintain that they worship the same God as Christians do (though they think Christians exaggerate the station of Jesus Christ, whom they see as a prophet).

We may also conclude that 1 billion Roman Catholics accept that Muslims seek to worship the same God as Christians worship. Some further percentage of the world’s Christians are Presbyterians, Anglicans/ Episcopalians, etc., who affirm much the same thing.

So if the Wheaton College administrators deny this proposition, they are at the least in a tiny minority of Christians and an even tinier minority of human beings.

I don’t really care about their theology one way or another. And I’m sympathetic to the dilemmas of people of faith trying to live in a secular world. But I think if you’re going to suspend tenured professors for speech, you have to change your name from “College” to “seminary” or something. Colleges and universities are there to encourage skeptical thinking.