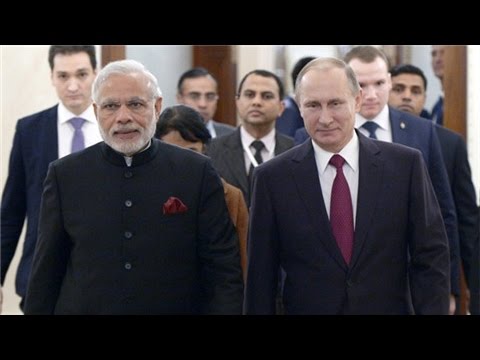 If it was Russian expansionism last year that triggered this isolation, it was Putin’s expansive foreign policy this year that brought him back in from the cold. But he enters 2016 with Western sanctions and seemingly bottomless oil prices still battering Russia’s economy, challenges to his energy-export diplomacy growing, and uncertainty surrounding the outcome of air strikes in Syria.

From his military intervention in Syria to his push for a counterterrorism coalition following last month’s terrorist attacks in Paris, Putin bounced back in 2015 from the ostracism he faced on the international stage following Russia’s seizure of Ukraine’s Crimea Peninsula in 2014 and the eruption of a bloody war between Kyiv’s forces and Russia-backed separatists in eastern Ukraine.

“The main achievement of Putin [in 2015] is that he’s back, that he’s more or less accepted as someone we have to talk with, as someone who could maybe even help us in terms of crises otherthan the Ukraine crisis,” said Stefan Meister of the Berlin-based Robert Bosch Center For Central And Eastern Europe, Russia, and Central Asia.

Like any gambit, Putin’s push to make Russia an indispensable player in resolving the civil war in Syria and a leader in a joint fight against terrorism carries risks.

The aerial bombardment campaign he launched on September 30 to support Syrian government forces against opponents including Islamic State (IS) militants and more moderate rebel groups has already irritated Western and Gulf Arab states that say the intervention is chiefly aimed at propping up Russia’s staunch ally, President Bashar al-Assad.

The intervention also threatens to drain financial resources away from Russia’s foundering economy, upset its large Sunni Muslim minority, and raise the threat of terrorism at home, while unexpected events like Turkey’s downing of a Russian bomber near the Syrian border on November 24 can produce geopolitical fallout like the ensuing rift between Ankara and Moscow.

While Putin is less isolated than he was at the turn of 2015, the Russian people may be more isolated. Putin banned flights to Egyptian Red Sea resorts after a passenger jet was bombed over the Sinai Peninsula in what IS militants said was revenge for Moscow’s Syria campaign. He then ordered Russian travel firms to cease selling trips to Turkey to Russian tourists.

Nor does the Russian bombing campaign in Syria appear likely to convince the United States or the European Union to roll back sanctions imposed on Moscow over its interference in Ukraine. The EU extended sanctions against Russia through July 2016 on December 21, and Washington added nearly three dozen people and companies to its sanctions list the following day.
Russia started bombing Syria at the end of September.Russia started bombing Syria at the end of September.

“There is absolutely no trade-off, there is no ability for Russia to leverage cooperation on counterterrorism in Syria for any kind of change in our very clear strategy and policy on Ukraine,” Celeste Wallander, senior director for Russia and Central Asia on Obama’s National Security Council, told RFE/RL in a recent interview.

Putin’s stepped-up intervention in Syria, however, has brought Russia back to the table in terms of Middle East politics, has “reminded people Russia counts,” and has had “a great legitimating effect at home,” said Mark Galeotti, a professor at New York University and an expert on Russia’s security services.

“So far — and it might well be [like] someone who jumps out of a window and says he’s fine until actually hitting the ground — but so far, at least, it’s actually proven very successful at doing the things that he’s wanted it to do,” Galeotti told RFE/RL.

Putin’s foreign policy in 2015 has been “about dealing with the consequences of 2014,” Galeotti said.

“A central issue has been the intertwined issues of economic sanctions and just generally the sort of growing isolation, and a sense of trying to sort of basically roll back both,” Galeotti said. “And obviously we saw that most graphically and obviously with the Syrian adventure.”

Putin leveraged the Syria crisis and two terrorist attacks claimed by IS — the November 13 spree that killed 130 people in Paris and the downing of the Russian jet in Egypt, which killed 224 — to reassert his diplomatic swagger.

On the international stage, perhaps the starkest contrast between the Putin of 2014 and 2015 was in his treatment at annual meetings of the G20.

Putin left the 2014 G20 summit in Brisbane early after facing searing criticism: Australian Prime Minister Tony Abbott vowed to “shirtfront” him over the July 2014 downing of Malaysian Airlines Flight MH17 over eastern Ukraine, which Kyiv and Western governments blame on the Russia-backed separatists.

Canadian Prime Minister Stephen Harper told Putin: “I guess I’ll shake your hand, but I only have one thing to say to you: You need to get out of Ukraine.”

This confrontational tone was virtually absent from the November 2015 G20 meeting in Antalya, Turkey, where Putin huddled with Obama and met with an array of other leaders, and where Russia and the West appeared to draw closer to agreement on how to end the Syrian civil war.

U.S. Secretary of State John Kerry, meanwhile, met with Putin in in May in the Black Sea resort of Sochi — his first trip to Russia since outbreak of the conflict that has killed more than 9,000 people in eastern Ukraine — and again in Moscow in December. And French President Francois Hollande made a snap visit to Moscow following the Paris attacks and urged collaboration between Russia and Washington to defeat IS in Syria.

“If one looks at how after the Paris attacks, how quickly Hollande came to Moscow, and the very positive vibes around that meeting, I think this very much says that in fact Putin has demonstrated that there are worse things in the world than Putin’s Russia, and that actually isolating it can cause problems and potentially is putting aside a useful instrument,” Galeotti said.

Ahead of Kerry’s latest trip to Moscow, Wallander framed the heightened U.S. engagement with Russia on Syria in 2015 as part of the Obama administration’s two-track diplomacy with Moscow, saying that Russia is not yet “fully pulled out of the isolation that President Putin had managed to maneuver Russia into as a result of his choices on Ukraine.”

“Russia is more active on the issue of Syria’s civil war, and through its direct military intervention. But Russia was always involved in issues of global importance,” she said. “We always made exceptions to our general isolation policy of Russia when there are issues of global and national security importance.”

After Kerry’s meeting with Putin this month, the U.S. diplomat replied to a question about Obama’s comments a year ago portraying Russia as isolated by saying: “We don’t seek to isolate Russia as a matter of policy.”

“At that particular moment of time, there was an effort to try to make a statement about what had happened. But we have consistently said that the world is better off when Russia and the United States find common ground and an ability to be able to work together,” Kerry said.

At home, the anti-Western rhetoric that built to a fever pitch amid the conflict in Ukraine may not disappear next year.

With elections to the State Duma lower house of parliament due slated for September, 2016 “is going to be the year of a certain amount of necessary nationalistic bombast,” Galeotti told RFE/RL.

But the Kremlin will nonetheless likely seek to extract itself from its “colossal blunder” that the quagmire in eastern Ukraine has become, he added. “I think it’ll be a period to kind of rebuild connections, trying to get rid of some of the sanctions,” he said.

With EU member states also set to hold elections next year, Putin may hope that pressure from populist movements will provide a receptive audience for his overtures to scale back tensions, said Meister of the Robert Bosch Center For Central And Eastern Europe, Russia, and Central Asia.

“I think this opens leeway for Putin to get more gain or leeway on Ukraine and other post-Soviet countries,” he said. “I think it can be also an even more successful year for Putin.”

But there is pressure in the other direction, too, with several EU states pushing against Russia’s plans for a second gas link to Germany, Nord Stream 2, on the grounds that it would increase Moscow’s energy leverage and undercut EU unity. Poisoned ties with Turkey are also hampering Russia’s efforts to broaden its options for exporting energy to Europe.

Meanwhile, on top of the Ukraine war, Russia’s campaign of air strikes in Syria has opened Putin up to increasing criticism for something Moscow was rarely accused of as its military retreated after the 1991 Soviet collapse: killing civilians abroad.

And by siding with Shi’ite Iran and the Tehran-backed Lebanese Hizballah militia in Syria, Putin’s intervention there risks a serious blowback by plunging Russia into the historic conflict between Shi’te and Sunni Muslims.

“Putin is not a good strategist. He is stirring up a hornet’s nest of Sunni Muslims who will hold a grudge against him,” former U.S. Deputy Secretary of State Strobe Talbott, president of the Washington-based Brookings Institution think tank, told Reuters in November.

“He already had an internal problem with Islamist extremism, and he now has an external problem since ISIS was responsible for the Sinai plane bombing,” Talbott added, using an alternate acronym for Islamic State.

The military strategist Edward Luttwak, however, told RFE/RL’s Russian Service that “Putin is sufficiently resourceful to avoid the approaching carnage.”

At his December 2014 meeting with U.S. business leaders, Obama sharply criticized Putin’s stewardship of Russia, though he said Washington continues to offer Russia “a pathway to a diplomatic resolution” of the Ukraine conflict.

One year on, Wallander told RFE/RL that this pathway “is still open” and that Washington hopes to see the Minsk peace deal for eastern Ukraine — which requires Russia to withdraw forces from Ukraine and cede control of the border to Kyiv — “implemented early in 2016,” which would be slightly beyond the December 31 deadline.

Asked whether Obama is more optimistic about Russia than he was a year ago, Wallander said the U.S. president is likely “in the same place, because we are in the same place on Russia living up to its commitments and being a constructive stakeholder on Ukraine.”