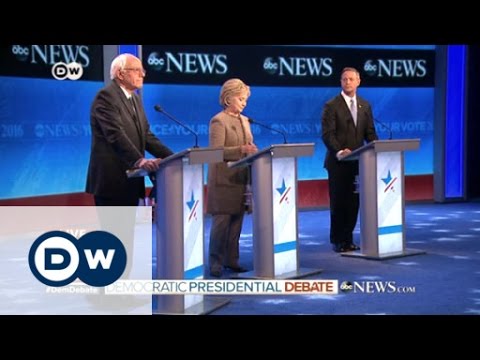 “And we also need to make sure that the really discriminatory messages that Trump is sending around the world don’t fall on receptive ears. He is becoming ISIS’s best recruiter. They are going to people showing videos of Donald Trump insulting Islam and Muslims in order to recruit more radical jihadists. So I want to explain why this is not in America’s interest to react with this kind of fear and respond to this sort of bigotry.”

Trump on Sunday denied that any such Daesh (ISIS, ISIL) video exists, and said of Clinton, “she lies like crazy.”

But Sec. Clinton did not say that Daesh had made videos featuring Trump. She said that they were simply showing people Islamophobic Trump videos.

That is, Sec. Clinton is maintaining that the Trump campaign videos or his appearances on television reproduced at YouTube are so offensive to Muslims that he has relieved Daesh of the labor involved in making recruiting videos.

I do not know if it is true that Daesh is showing people Trump videos. I’d say it is unnecessary. Trump’s message is being widely broadcast in the Muslim world, on television news shows, on radio, in newspapers, and on social media. Daesh wouldn’t have to lift a finger to make sure most Muslims heard that Trump wants to close mosques, considers Muslims terrorists until proven innocent, and wants to ban them from entering the United States. Most Americans have no idea how saturated Arab media is with US politics and culture. On Alarabiya in Arabic (Dubai) I just saw a news clip about the Clinton -Trump tiff over Islamophobia and Daesh, followed by a piece on Star Wars along with a review. Then the news veered off toward important subjects such as the carnage in Yemen and Syria on the ground.

Sec. Clinton’s overall point is correct. Daesh is attempting to convince mainstream Muslims to join a holy war against the United States on the grounds that the US hates Muslims and is persecuting them and wants to wipe them out. Most mainstream Muslims, however much they dislike US foreign policy on issues like keeping the Palestinians stateless and allowing Israel to steal their land and homes, know very well that most Americans have nothing against Muslims.

Daesh has to overcome Muslim insouciance toward the US. It has to convince Muslims that the US as a whole is satanic. So Trump does in fact feed into the Daesh narrative about the US, and so is inevitably useful to them for recruitment purposes.

So what Clinton said is on the mark:

“I worry greatly that the rhetoric coming from the Republicans, particularly Donald Trump, is sending a message to Muslims here in the United States and literally around the world that there is a “clash of civilizations,” that there is some kind of Western plot or even “war against Islam,” which then I believe fans the flames of radicalization.”

Daesh itself is not outraged by Trump’s comments, since they believe all Americans hate Sunni Muslims and want to commit genocide against them. Daesh is rooted in the Sunni resistance to the US military occupation of Iraq, during which 4 million Iraqis were made homeless and hundreds of thousands killed. Those statistics, of which the Americans who voted for the war appear to remain unaware — or maybe they have forgotten — are all the evidence Daesh needs of US intentions. Trump’s hatefulness and bluster is just icing on the cake.

Daesh is a low-budget affair that enlists other people to do its dirty work, in an effort to save money. It has called for ‘lone wolf’ attacks on the West. But that is actually a sign of extreme weakness and lack of resources. It is renouncing command and control, renouncing attacks on strategic or symbolic targets, renouncing effective guerrilla action in favor of random, mindless and largely ineffectual terrorism. It is just calling for random people to go postal.

In that regard, Trump is a perfect tool for Daesh, insofar as he enrages Muslims and makes it look as though America is at war with the religion in general instead of with a radical fringe. In effect, he is just himself a ‘lone wolf’ writ large, acting willy-nilly for Daesh purposes, repeatedly going postal with his big mouth.

Arabic newspapers tend to agree that Trump is a propaganda gift to Daesh. (Amusingly, they transliterate his name as “Tramp”).

However, most Muslims who publish newspaper articles or other writing are cosmopolitan and understand that Trump represents a small but vocal minority in American society.

And most Muslims, as a Pew poll demonstrated, deeply dislike Daesh and reject the idea that it speaks for them.