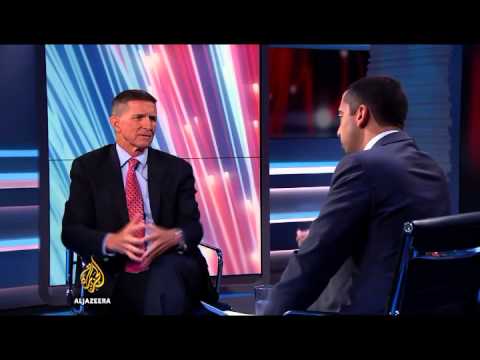 The U.S. is poised to repeat all the same mistakes in Syria that it made in Iraq after 9/11, says former head of Defense Intelligence Agency

The 2003 U.S. invasion of Iraq fueled the creation of the Islamic State (ISIS) today and must serve as a warning against similar rash military intervention in Syria, a former U.S. intelligence chief said in an interview with German media on Sunday.

“When 9/11 occurred, all the emotions took over, and our response was, ‘Where did those bastards come from? Let’s go kill them. Let’s go get them.’ Instead of asking why they attacked us, we asked where they came from,” former U.S. special forces chief Mike Flynn, who also served as director of the Defense Intelligence Agency (DIA), told Der Spiegel. “Then we strategically marched in the wrong direction.”

In recent weeks, ISIS has claimed responsibility for attacks in Lebanon and Paris and the bombing of a Russian airplane over the Sinai peninsula, which together killed hundreds of people. Following the attacks, French President François Hollande vowed a “merciless” response against the group in Syria and Iraq—a statement that prompted comparisons between Hollande and former U.S. President George W. Bush in the wake of 9/11.

Echoing long-held arguments made by other experts, Flynn said Sunday that increased airstrikes and other offensives could be seen as an attempt to “invade or even own Syria,” and that the fight against militant groups like ISIS will only succeed or make progress through collaborative efforts with both Western and Arab nations. “Our message must be that we want to help and that we will leave once the problems have been solved. The Arab nations must be on our side.”

Otherwise, the U.S. is poised to repeat all its past mistakes, he said.

Der Spiegel‘s Matthias Gebauer and Holger Stark noted that in February 2004, the U.S. military “already had [ISIS leader] Abu Bakr al-Baghdadi in your hands—he was imprisoned in a military camp, but got cleared later as harmless by a U.S. military commission. How could that fatal mistake happen?”

We were too dumb. We didn’t understand who we had there at that moment.

[….] First we went to Afghanistan, where al-Qaida was based. Then we went into Iraq. Instead of asking ourselves why the phenomenon of terror occurred, we were looking for locations. This is a major lesson we must learn in order not to make the same mistakes again.

“It was a huge error,” Flynn said. “As brutal as Saddam Hussein was, it was a mistake to just eliminate him. The same is true for Moammar Gadhafi and for Libya, which is now a failed state. The historic lesson is that it was a strategic failure to go into Iraq. History will not be and should not be kind with that decision.”

Flynn’s interview with Der Spiegel echoes comments he made to Al Jazeera‘s Mehdi Hasan in August that the U.S. “totally blew it” in preventing the caliphate’s rise “in the very beginning.”

In fact, Flynn said, the U.S. deliberately backed extremist groups within the Syrian rebel movement as far back as 2012, when he was still DIA head. The Obama administration was aware at the time of a recently-declassified DIA memo that predicted the rise of a militant group in eastern Syria. Supporting the insurgency was a “willful decision,” he said.