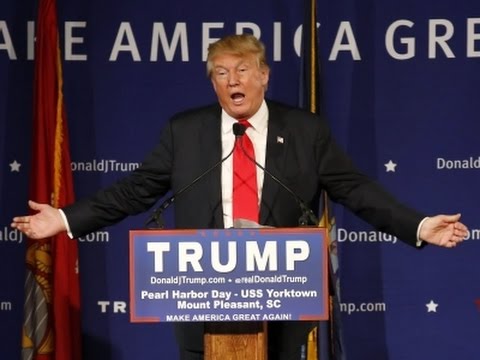 The Arabic press reported with a straight face GOP presidential contender Donald Trump’s allegations that he has lots of Muslim friends and that they are calling them to say how pleased they are that he wants to exclude them from coming to the United States, and that they are glad he is tackling the problem of Muslim extremism.

Back in the real world, how have Muslims responded?

Veteran NBC correspondent Richard Engel said that the statements are being taken deadly seriously, and should be, reporting on what one Arab ambassador told him:

According to BBC Monitoring [hereafter BBCM], prominent Egyptian novelist Ahdaf Soueif tweeted, “Shouldn’t Arab business owners cancel their contracts with Donald Trump . . . It’s your money and your business.” And she was hardly alone.

“‘Donald Trump calls to ban all Muslims from entering US – Dubai should ban this bigot from doing business here,’ UAE-based @AhmedKh tweeted.”

[And then there was this meme – That Trump is now the chief recruiter for Daesh (ISIS, ISIL):]

“[IS leader] Abu-Bakr al-Baghdadi would not find a better public relations agent and recruiter in the whole world than Donald Trump and his anti-Islam, demagogic statements,” Khalil Jahshan (@naz548) added in Arabic.

What about American allies in the fight against extremists like the Taliban, such as the Afghanistan government?

The Afghanistan parliamentarians roundly condemned Trump, according to BBCM:

“[MP Khalil Ahmad Shahidzada, captioned, speaking in Pashto] . . . This man is extremely sick and does not deserve to be elected as the president. He needs to be sent to mental asylum and must retract his words.

[Correspondent] At the same time, the first deputy speaker of the lower house of parliament said that the such a stance against the Muslim world was dangerous and that such remarks could lead to conflict between different faiths of the world.

Dr. Ibrahim Nagm, advisor to the chief Muslim jurisconsult (mufti) of Egypt, slammed Trump as another example of the Islamophobia that threatens Western Muslims.

The office of the Mufti in Egypt called the remarks a clear expression of enmity toward Islam, and worried that they would cause antagonism against Western Muslims.

It isn’t exactly the same but by analogy, this would be like the Archbishop of a mostly Catholic country speaking out about US politics harming adherents. And, the parliament of Afghanistan, above, is not an non-entity.

Would it be too much to ask US cable & tv news to interview some real Muslim politicians from abroad on all this?

The Wafd newspaper in Egypt did a spread on Trump’s business investments in Gulf states such as the United Arab Emirates, with the title “Racist Trump hates Muslims but loves their money.”

The Palestinian al-Watan Voice said Trump had turned into Hitler.

Egyptian humorist Bassem Yousef said on Twitter that “I didn’t know Trump was fluent in Nazi.”

I didn't know that Donald Trump was fluent in Nazi

A lot of Muslims abroad reacted with humor and a conviction that the American people are better than this. Yousef followed up:

Talking 2 Trump after his comments about Muslims,realized I was just talking to a dummy.Exactly like the real thing pic.twitter.com/wSFv6NnkXB