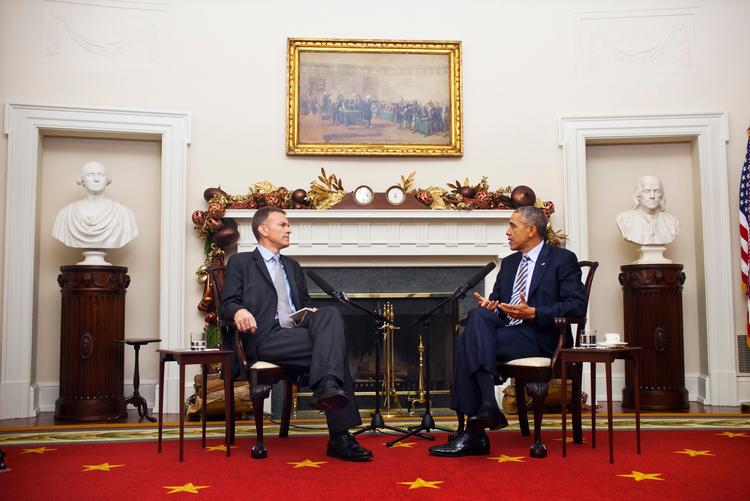 President Obama gave an interview on National Public Radio on Monday in which he attempted to reassure the US public about the threat of Daesh (ISIL, ISIS).

Poor Obama was constrained to defend the point that “ISIL isn’t the Soviet Union” and we are not engaged in a world war.

“ISIS is a virulent, nasty organization that has gained a foothold in ungoverned spaces effectively in Syria and parts of western Iraq.”

Translation: The Soviet Union was at its height a country of nearly 300 million persons, with a 5-million man army and large armored divisions, an impressive air force, and nuclear warheads.

Daesh is 30,000 fighters in a few desert towns who have probably kidnapped on the order of 3 or 4 million people (most of their inhabitants have run away from them). They have a few tanks, but not that many, and no jets at all. Their main weapons are Kalashnikov machine guns and rocket propelled grenades. They are a small band of desert pirates. They aren’t very much like the Soviet Union. It is true that they also engage in terrorism, but the Paris attack focused on soft targets of no strategic significance; they didn’t pose a threat to the French state. The attack might well have been launched by radical elements in European slums if there had never been any Daesh. San Bernardino was an incident of workplace rage inspired by the Israeli oppression of stateless Palestinians and by al-Qaeda in the Arabian Peninsual (AQAP) in Yemen, not by Daesh, with which it appears to have had nothing to do.

The distance between Mosul, now the major Daesh population center, and al-Raqqa, the Daesh capital, is roughly the same distance as from Elk City Oklahoma in the west of the state to Tulsa, OK in its east. The population living under Daesh rule is likely about the same as the population of Oklahoma.

So, Daesh is not the Soviet Union. It is Oklahoma without much infrastructure, wealth or so much as steady phone service, electricity and internet.

(In contrast, the distance between Aswan in Egypt and Alexandria in that country is roughly the same as between Washington DC and Lincoln, Nebraska, and Egypt is a country of nearly 90 million, where radical Islam or even just Muslim fundamentalism is more or less forbidden).

Obama is clearly frustrated that right wing radio and cable television, and even mainstream cable television, have interacted with the more belligerent GOP presidential candidates to project Daesh as some sort of evil superpower (former senator Rick Santorum is talking about World War III) and an existential threat to the United States.

I suppose if Obama were more of a politician, he would just deliver fiery oratory about the need to wage war on Daesh. Telling Americans that their nightmares are overblown is never a winning political strategy.

Daesh has two arenas of operation. It is trying to take and keep territory in Syria and Iraq. And, it has a terror wing that encourages operations on Western soil.

With regard to the territory, Daesh has already seen its best days and is now in decline. In summer of 2014 when people in Mosul and Falluja opened their doors to it, there was talk of Baghdad and Iraqi Kurdistan’s Erbil falling to it. That outcome was never very likely, since Daesh typically can only take a city if the city is full of Sunni Muslims hoping it will deliver them from oppression at the hands of other religious or ethnic groups. Baghdad is now a largely Shiite city and the Kurds will never accept Daesh.

In the past 18 months, Daesh has been contained and then rolled back. It was pushed back out of Samarra. It has lost Beiji and Tikrit. Falluja appears to be in play. It is losing Ramadi, which has been cut off from supply lines to Syria. Ramadi the most vulnerable of Sunni Arab cities in Iraq to attacks from the Shiite south and it was never likely Daesh could hold it in the long term.

On the Kurdish front, the Peshmerga have regrouped and gotten better training and arms. They pushed Daesh out of Kurdish areas in Diyala province. In Ninewah province, they took back Mt. Sinjar, hundreds of miles from Erbil, and then recently took back Sinjar city.

In Syria, Daesh was prevented from taking Kobane and has lost half of al-Raqqa Province, its base. It is being blocked by the Syrian Arab Army, Hizbullah and Russian fighter jets from moving into Aleppo (where even rebel-dominated east Aleppo rejects it).

The situation of Daesh in its capital, al-Raqqa, is so uncertain that there has been talk of them evacuating it toward Mosul. It is being bombed there now by the French and British, a new development this fall. Likewise, Russia has bombed their oil trucks.

This screen shot from YouTube clearly shows that Daesh had lost substantial territory even by the middle of last summer. It has lost more since. 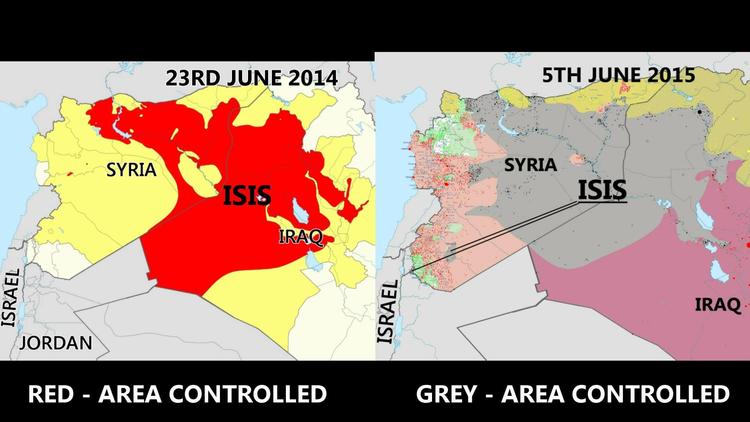 I don’t deny that the wheels have moved slowly. But you can’t say there has been no progress. There are a lot of problems with mainly enlisting Shiites and Kurds to crush Daesh. They can do it, and probably could do it on an accelerated schedule. But it is much better to have Sunni Arabs play a big role. Reports suggest that they are playing such a role in taking back Ramadi, the capital of al-Anbar province, and have finally been armed by the government of Haydar al-Abadi. Contrary to what Lindsey Graham thinks, US troops would not be more welcome as liberators in the Sunni Arab cities than would Shiite or Kurdish troops.

As for Daesh plots abroad, they don’t seem very professional and depend heavily on just encouraging lone wolves to hit soft targets. That kind of thing is upsetting, but it isn’t likely to result in the overthrow of the government.

Daesh is trolling the West. They want to create polarization between Christians and Muslims, and then pick up the Muslims by telling them they can protect them from violent Christian attacks. They want to stay in the limelight so as to attract foreign fighters and the money of Gulf oil millionaires. They want to inspire fear and hate.

The idea that this small desert band that flourishes, as Obama said, in the straitened spaces where states have collapsed, could force us by saying “boo!” to abrogate the 4th amendment or the 8th amendment and stampede us into hateful hysteria, is unthinkable. If it happens, the fault won’t lie with Daesh. It will lie with us.

So Obama has this difficulty, of seeing the situation proportionally, and of conveying to the public the adequate amount of reassurance and alarm. But given the klaxons sounding 24/7 on cable television, social media and at Trump rallies, Obama’s measured, clear-eyed estimations are being drowned out and discounted, even by seasoned journalists.