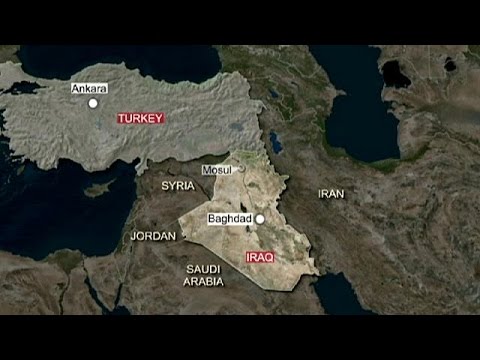 Sawt al-`Iraq reports that sources in the Turkish military announced Saturday that about 150 Turkish troops had been placed into northern Iraq along with 20-25 tanks. The head of the Iraqi parliament’s Security and Defense Committee, Hakim Ilzami, said that this incursion was just switching out alien Daesh (ISIS, ISIL) rule for other alien rule. He said that the Turkish troops came in with the agreement of the Kurdistan Regional Government. He called on Iraqi Prime Minister Haydar al-Abadi to subject the Turkish contingent to an aerial bombardment if it did not withdraw.

Aljazeera says that the Iraqi foreign ministry called the Turkish ambassador in Baghdad on the mat, complaining about the incursion. Turkish prime minister Ahmet Davutoglu replied that Turkey had been invited in by the Ninewah Provincial government with the consent of the Iraqi government, and that actually some Turkish troops had been there as trainers for a year now. He said that the regiment has trained 2000 local Iraqi fighters to take on Daesh. (These would be Sunni Iraqis, possibly rural tribal levies, though some reports suggest that the Kurdistan Peshmerga national guard has also received Turkish training). A spokesman for the KRG said that the Turkish presence is legitimate and part of the international coalition effort against Daesh.

The Peshmerga and the Turkish military have cooperated against Daesh, as when Peshmerga troops were allowed to transit eastern Turkey and to join in the defense of Kobane, a Kurdish enclave in northern Syria. Turkey prefers the politically more right wing Iraqi Kurdish forces to the leftist Syrian Kurdish YPG.

But Baghdad said it was never informed of this plan and foreign troops on its soil are unacceptable. (It seems to me a little unlikely that the Baghdad government did not in fact know about a whole Turkish tank regiment north of Mosul all this time, but that as long as its presence wasn’t a big talking point in the Iraqi press, it was sanguine about it. Now the presence is being made an issue of by the Shiite parties, the power base of prime minister Haydar al-Abadi, so the foreign presence has to be denounced.

The Iraqi government lost Ninewah Province to Daesh in June of 2014 when the Iraqi army abandoned its posts and left behind masses of US military equipment. The Kurdistan Regional Government (KRG), an ethnic superprovince of Iraq in the northeast, which is semi-autonomous, no longer has a border with Iraq proper, only with Daesh.

According to Sawt al-`Iraq, The Citizens’ Coalition in parliament, led by the Islamic Supreme Council of Iraq under the chairmanship of Ammar al-Hakim, announced its rejection Saturday of any Turkish interventions in Iraqi affairs, saying “Iraq is not the inheritance of Turkish president Recep Tayyip Erdogan, such that he would arrive in the lands that his grandfathers arrived in.” The coalition said that the Turkish intervention is “a raid, about which it is impossible to remain silent.” The Iraqi parliamnt, it said, must “take a serious stand on this intervention.”

The Sunni-dominated Ottoman Empire, to which the Turkish Republic is a successor state, ruled Iraq from the mid-1500s until World War I, when the British invaded and colonized Iraq. In turn, Iraq gained nominal independence from the British Empire in 1932. Al-Hakim is accusing Turkey of neo-colonialism.

Habib al-Turfi, spokesman for the Citizens’ Coalition, told al-Mada Press that Turkey’s incursion into Iraq took place after that country shot down a Russian fighter jet, and was a further manifestation of Turkey’s growing lack of respect for international norms of behavior. “This issue,” he said, “will not afford Erdogan the opportunity to build a new empire, since Iraq has numerous ways of responding to it.”

Al-Hakim’s Supreme Islamic Council of Iraq (ISCI) is a Shiite party, originally formed at the suggestion of Ayatollah Ruhollah Khomeini among Iraqi expatriates in Tehran in 1984, which lends another dimension to this conflict. It was typical of Iraqi politics in the 20th century for Sunni Iraqis to be Arab nationalists and to look to Cairo and other Sunni Arab capitals for their political cues. In contrast, Shiite Iraqi tended to be more country-nationalists focused on Iraq, and if they had foreign horizons they tended to be those of neighboring Shiite Islam. (This is not to say that there weren’t Sunni country-nationalists or Shiite Arab nationalists, just that those were the major trends in those communities).

ISCI has a paramilitary arm, the Badr Corps, originally formed under the tutelage of the Iranian Revolutionary Guards, which has been among the more effective set of fighters against Daesh (ISIL, ISIS), having played a leading role in kicking that organization out of Tikrit. Badr thinks it can take Mosul back, as well, without Turkish help.

On the other hand, it has to be admitted that Sunni Turkish troops would probably be far more welcome in Mosul as saviors of the city from its current brutal leadership of the cult leader Abu Bakr al-Baghdadi than would the southern Shiite fighters of the Badr Corps. Nation and sect overlay uneasily in contemporary Iraq, thought this uneasiness in some ways has been apparent for a century.

The Turkish intervention was also strongly denounced by Iraqi president Fouad Masoum, a Kurd, who characterized the presence of Turkish troops in Ninewah Province as “a violation of internationl norms and a violation of national sovereignty.”

Euronews: “Iraq calls Turkish troop presence in the north a ‘hostile act’ and calls on the soldiers to withdraw”