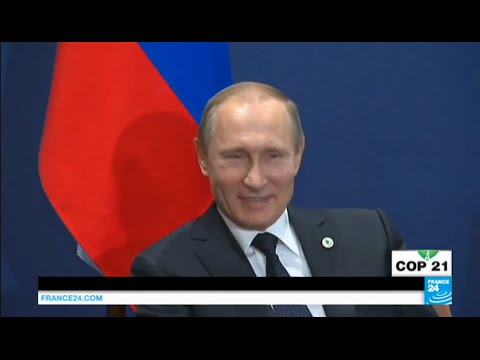 Russian President Vladimir Putin said Monday in Paris that his government had intelligence that the reason Turkey shot down a Russian fighter jet last week was to protect oil smuggling from Daesh (ISIS, ISIL) through Turkey. Putin said,

“”We have every reason to think that the decision to shoot down our plane was dictated by the desire to protect the oil supply lines to Turkish territory, right to the ports where it is loaded onto tankers. . . We have received additional information which unfortunately confirms that this oil, produced in areas controlled by the Islamic State and other terrorist organisations, is transported on an industrial scale to Turkey.”

In response, Turkish president Tayyip Erdogan said that if any proof could be brought forward that Turkey shot down the Russian plane because of Daesh petroleum, he would resign.

Erdogan tried to turn the tables on Putin by charging that a Russian national in Syria is engaged in brokering the ISIL petroleum smuggling.

Russia said Monday that the ban on importing vegetables from Turkey would remain in place. Russian sanctions on Turkey also hit the tourist trade, costing Turkey some $3 bn a year. These measures only affected Russian spending in Turkey. Turkish imports of Russian fossil fuels remain uninterrupted.

Putin has a much more effective way of bringing the pain to Erdogan, however. The leftist newspaper Radikal quoted the daily BasHaber’s interview tith

“The PYD [Kurdish Democratic Union Party] was pleased about Russia’s intervention in Syria. An alliance between the PYD and Russia is inevitable. Russia’s bombardment of the radical Islamist groups on the ground will have a huge impact on the PYD operations. (…) Russia’s operations will considerably bolster the PYD on the ground.”

The PYD and its paramilitary arm, the YPG (People’s Protection Unites) are considered by Turkey to be branches of the separatist Kurdish terrorist organization the PKK (Kurdistan Workers Party), but the US and Russia do not agree, and have been willing to cooperate with the leftist Kurds in Syria against Daesh (ISIS, ISIL).

Putin is attempting to shore up the government of Bashar al-Assad, while Turkey hopes to see it overthrown by Muslim fundamentalist rebels. Putin is angling for an alliance of the leftist Kurds with the Baath regime against Daesh Radikal notes (BBC Mon. trans.):

“In a meeting in Sochi last month ( 23 October 2015,) Vladimir Putin spoke of his country’s goals for the air operations and their intentions regarding Kurds as follows: ” You cannot separate terrorists as moderates and extremists. Defeating terrorist groups in Syria will not resolve all the problems but it will create the necessary conditions for a political solution. The government and Kurdish forces in Syria should join forces in combating terrorism. Our air operations in Syria will have positive results.”

Nothing would anger Turkey’s government more than for Russia to give military support to the Syrian Kurds in their quest to establish a connected territory, “Rojava,” linking the three major Kurdish cantons in northern Syria.

Semih Idiz of the Cumhuriyet (“the Republic), a left of center Turkish paper, revealed (BBC Monitoring trans.) that in response to the shoot down of the Russian fighter jet:

“The Russian General Staff Chief has also stated that they are going to provide aerial escorts to the jets carrying out the bombing campaign against the Turkmens, which they are going to step up substantially, “in order to protect them from behind.”

Idiz, in an article on how al-Assad is the main beneficiary of the shootdown, concluded,

“When we look at the political sphere, Moscow is going to try to render Turkey as ineffective as possible in the Syrian negotiations. It is useful to recall that the United States and Russia are spearheading the negotiations in question. And it is also useful to keep in mind that Turkey, because of a series of strategic mistakes, is one of the weakest links of the “Syrian table.”

Now if you were [Syrian President Bashar] Al-Asad, would you not be rejoicing on account of Turkey’s having shot down the Russian plane?